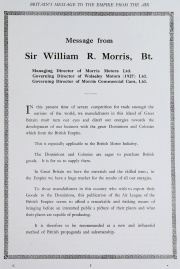 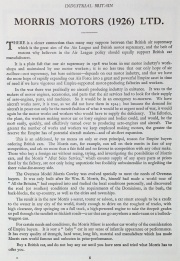 There is a closer connection than many may suppose between that British air supremacy 1 which is the great aim of the Air League and British motor supremacy, and the best of reasons why believers in the Air League policy should equally support British car manufacturers.

It is a plain fact that our air supremacy in 1918 was born in our motor industry’s work-shops and maintained by our motor workers; it is no less true that our only hope of air existence - not supremacy, but bare existence - depends on our motor industry, and that we have the more hope of rapidly expanding our Air Force into a great and powerful Empire asset in time of need if we have vigorous and Empire-supported motor-producing factories and workers. In the war there was practically no aircraft producing industry in existence.

It was to the makers of motor engines, accessories, and parts that the air services had to look for their supply of aero-engines, parts, and machines. So it would be in an emergency to-morrow. We have aircraft works now, it is true, as we did not have them in 1914; but because the demand for aircraft in peace can only be the merest fraction of what it would be at urgent need of war, it would again be the motor works and workers who would have to supply the deficiency. The factories, the plant, the workers making motor car or lorry engines and bodies could, and would, be the most easily, quickly, and effectively turned over to producing aero-engines and aircraft. The greater the number of works and workers we keep employed making motors, the greater the reserve the Empire has of potential aircraft makers - and of air-fleet expansion.

This is an additional, by no means an only or even principal, reason for Empire buyers ordering British cars. The Morris cars, for example, can sell on their merits in face of any competition, and ask no more than a fair field and no favour in competition with any other make. Those who buy a foreign car without seeing, trying, and investigating the possibilities of Morris cars, and the Morris "After Sales Service," which ensures supply of any spare parts at prices fixed by the factory, are not only being unpatriotic but foolishly unbusinesslike in neglecting the sheer value-for-money side.

The Overseas Model Morris Cowley was evolved specially to meet the needs of overseas buyers. It was only built after Sir Wm. R. Morris, Bt., himself had made a world tour of "All the Britains," had enquired into and Studied the local conditions personally, and discovered the road (or roadless) conditions and the requirements of the Dominions, in the bush, the back-blocks, the up-country, as well as the cities and townships.

The result is in the new Morris 5-seater, tourer or saloon, soot smart enough to be a credit to the owner in any city of the world, Sturdy enough to drive on the roughest of tracks, with high clearance, deep springing on a full track, a high-powered engine to take the Steepest grades or pull through the sandiest or Stickiest roads - a car that can go anywhere a mule-team or a bullock-waggon can.

For certain needs and conditions, the Morris Minor is another car worthy of the consideration of Empire buyers. Is is NOT a "baby" car in any sense of infantile appearance or performance. It has every quality of Strength, hard wear, long life, material and manufacture which has made Morris cars world famous and unbeaten in price-performance.

Buy a British car, and do not buy any car until you have seen and tried what Morris has to offer you.