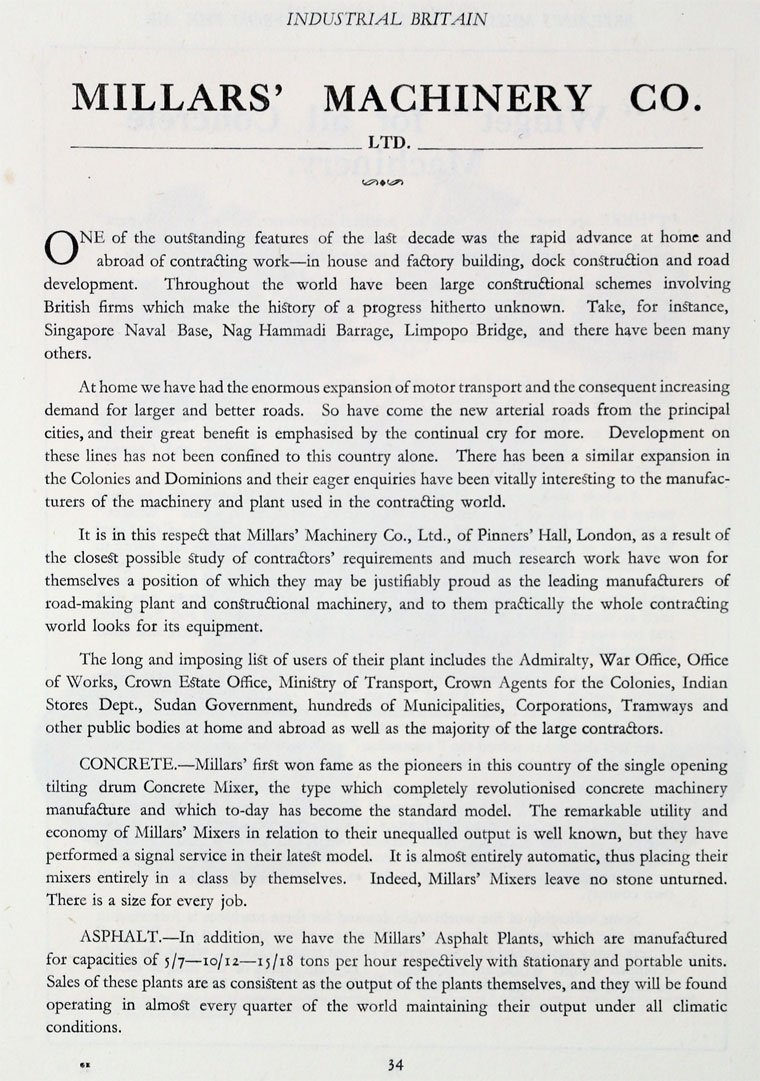 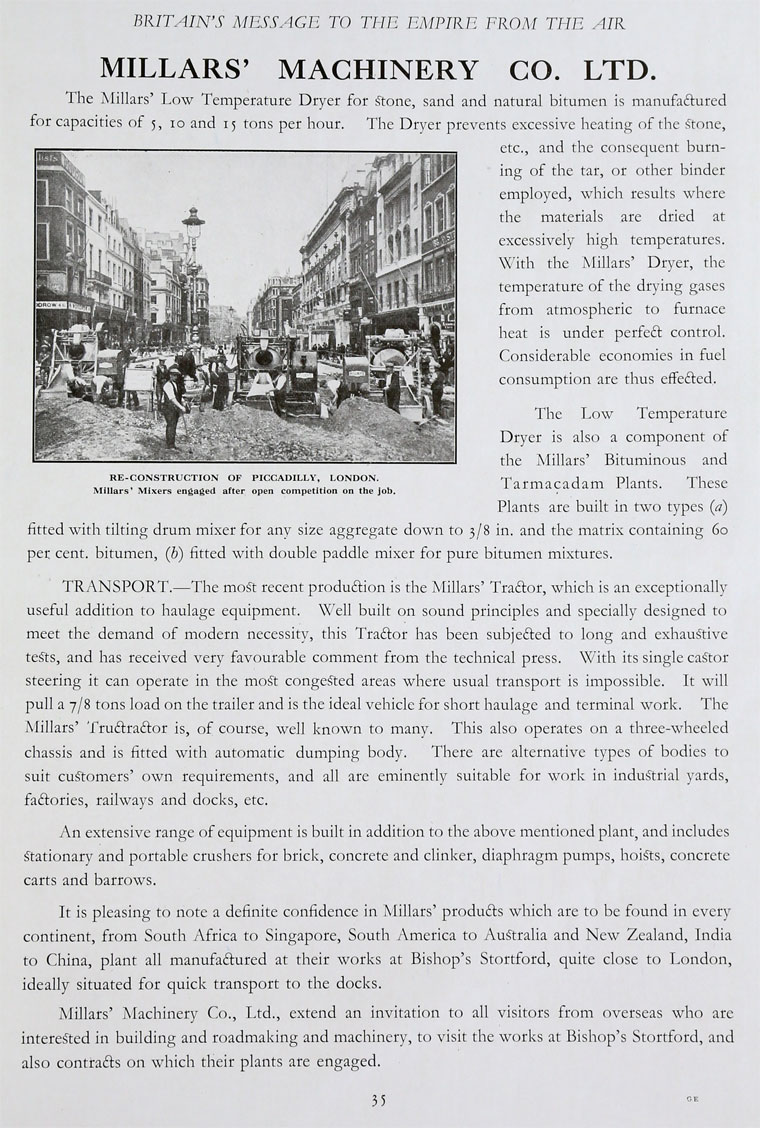 One of the outstanding features of the last decade was the rapid advance at home and abroad of contracting work - in house and factory building, dock construction and road development. Throughout the world have been large constructional schemes involving British firms which make the history of a progress hitherto unknown. Take, for instance, Singapore Naval Base, Nag Hammadi Barrage, Limpopo Bridge, and there have been many others.

At home we have had the enormous expansion of motor transport and the consequent increasing demand for larger and better roads. So have come the new arterial roads from the principal cities, and their great benefit is emphasised by the continual cry for more. Development on these lines has not been confined to this country alone. There has been a similar expansion in the Colonies and Dominions and their eager enquiries have been vitally interesting to the manufacturers of the machinery and plant used in the contracting world.

It is in this respect that Millars' Machinery Co., Ltd., of Pinners' Hall, London, as a result of the closet possible study of contra6tors' requirements and much research work have won for themselves a position of which they may be justifiably proud as the leading manufacturers of road-making plant and contracting machinery, and to them practically the whole contracting world looks for its equipment.

The long and imposing lit of users of their plant includes the Admiralty, War Office, Office of Works, Crown Estate Office, Ministry of Transport, Crown Agents for the Colonies, Indian Stores Dept., Sudan Government, hundreds of Municipalities, Corporations, Tramways and other public bodies at home and abroad as well as the majority of the large contractors.

CONCRETE. - Millars' first won fame as the pioneers in this country of the single opening tilting drum Concrete Mixer, the type which completely revolutionised concrete machine, manufacture and which to-day has become the standard model. The remarkable utility and economy of Millars' Mixers in relation to their unequalled output is well known, but they have performed a signal service in their latest model. It is almost entirely automatic, thus placing their mixers entirely in a class by themselves. Indeed, Millars Mixers leave no stone unturned. There is it size for every job.

ASPHALT. - In addition, we have the Millars' Asphalt Plants, which are manufactured for capacities of t/7 - to/tz-15/18 tons per hour respectively with Stationary and portable units. Sales of these plants are as consistent as the output of the plants themselves, and they will be found operating in almost every quarter of the world maintaining their output under all climatic conditions.

The Millars' Low Temperature Dryer for Stone, sand and natural bitumen is manufactured for capacity, 5,10 and 15 tons per hour. The Dryer prevents excessive heating of the stone, etc., and the consequent burning of the tar, or other binder employed, which results where the materials are dried at excessively high temperatures. With the Millars' Dryer, the temperature of the drying gases from atmospheric to furnace heat is under perfect control. Considerable economies in fuel consumption are thus effected.

The Low 'Temperature Dryer is also a component of the Millars' Bituminous and Tarmacadam Plants. These Plants are built m two types (a) fitted with tilting drum mixer for any size aggregate down to 3/8 in. and the matrix containing 6o per cent. bitumen, (b) fitted with double paddle mixer for pure bitumen mixtures.

TRANSPORT. - The most recent production is the Millars' Tractor, which is exceptionally useful addition to haulage equipment. Well built on sound principles and specially designed to meet the demand of modern necessity, this Tractor has been subjected to long and exhaustive tests, and has received very favourable comment from the technical press. With its single castor steering it can operate in the most congested areas where usual transport is impossible. It will pull a 7/8 tons load on the trailer and is the idol vehicle for short haulage and terminal work. The Millars' Tructractor is, of course, well known to many. This also operates on a three-wheeled chassis and is fitted with automatic dumping body. There are alternative types of bodies to suit customers' own requirements, and all arc eminently suitable for work in industrial yards, factories, railways and docks, etc.

An extensive range of equipment is built in addition to the above mentioned plant, and includes Stationary and portable crushers for brick, concrete and clinker, diaphragm pumps, hoists, concrete carts am' barrows.

It is pleasing to note a definite confidence in Millars' products which are to be found in every continent, from South Africa to Singapore, South America to Australia and New Zealand, India to China, plant all manufactured at their works at Bishop's Stortford, quite close to London, ideally situated for quick transport to the docks.

Millars' Machinery Co., Ltd., extend invitation to all visitors from overseas who are interested in building and roadmaking and machinery, to visit the works at Bishop's Stortford, and also contracts on which their plants are engaged.