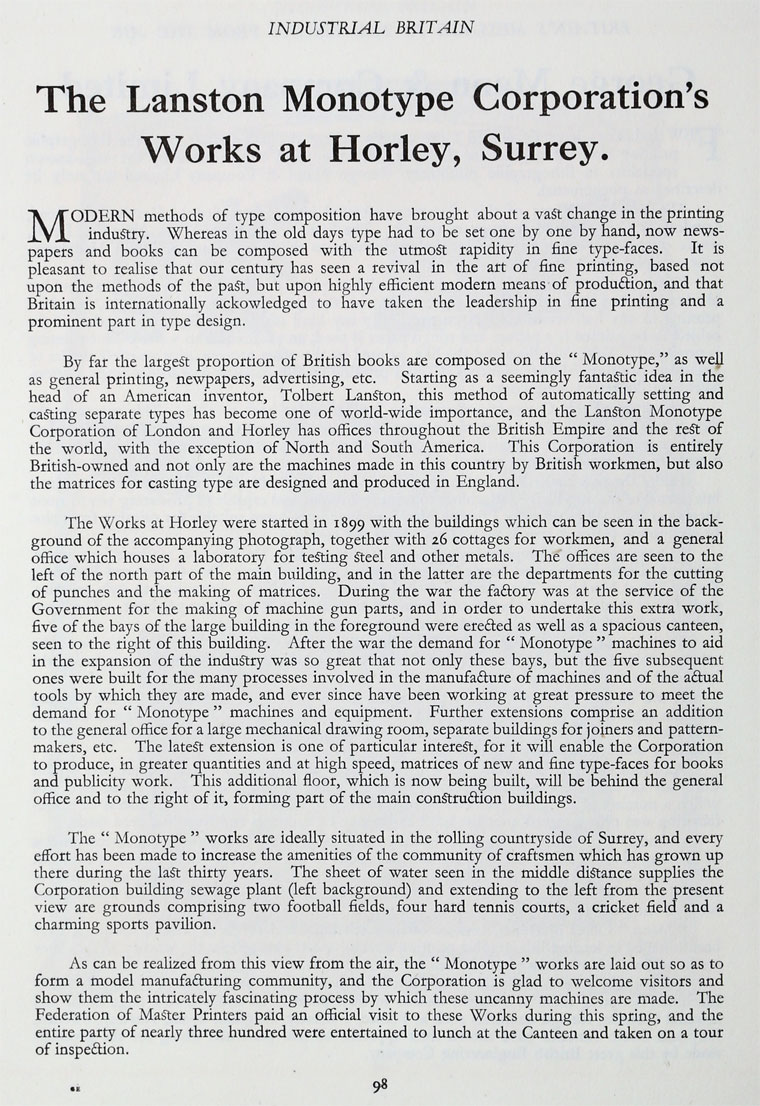 MODERN methods of type composition have brought about a vast change in the printing industry. Whereas in the old days type had to be set one by one by hand, now newspapers and books can be composed with the utmost rapidity in fine type-faces. It is pleasant to realise that our century has seen a revival in the art of fine printing, based not upon the methods of the p., but upon highly efficient modern means of production, and that Britain is internationally ackowledged to have taken the leadership in fine printing and a prominent part in type design.

By far the largest proportion of British books are composed on the "Monotype," as well as general printing, newspapers, advertising, etc. Starting as a seemingly fantastic idea in the head of an American inventor, Tolbert Langton, this method of automatically setting and casting separate types has become one of world-wide importance, and the Langton Monotype Corporation of London and Horley has offices throughout the British Empire and the rest of the world, with the exception of North and South America. This Corporation is entirely British-owned and not only are the machines made in this country by British workmen, but also the matrices for casting type are designed and produced in England.

The Works at Horley were started in 1899, with the buildings which can be seen in the background of the accompanying photograph, together with of cottages for workmen, and a general office which houses a laboratory for testing Bed and other metals. The offices are seen to the left of the north part of the main building, and in the latter are the departments for the cutting of punches and the making of matrices.

During the war the factory was at the service of the Government for the making of machine gun parts, and in order to undertake this extra work, five of the bays of the large building in the foreground were erected as well as a spacious canteen, seen to the right of this building.

After the war the demand for "Monotype" machines to aid in the expansion of the industry was so great that not only these bays, but the No subsequent ones were built for the many processes involved in the manufacture of machines and of the actual tools by which they are made, and ever since have been working at great pressure to meet the demand for "Monotype" machines and equipment. Further extensions comprise an addition to the general office for a large mechanical drawing room, separate buildings for joiners and pattern- makers, etc. The latest extension is one of particular inter., for it will enable the Corporation to produce, in greater quantities and at high speed, matrices of new and fine type-faces for books and publicity work. This additional floor, which is now being built, will be behind the general office and to the right of it, forming part of the main construction buildings.

The "Monotype" works are ideally situated in the rolling countryside of Surrey, and every effort has been made to increase the amenities of the community of craftsmen which has grown up there during the last thirty years. The sheet of woo seen in the middle distance supplies the Corporation building sewage plant (left background) and extending to the left from the present view are grounds comprising two football fields, four hard tennis courts, a cricket field and a charming sports pavilion.

As can be realized from this view from the air, the "Monotype" works are laid out so as to form a model manufacturing community, and the Corporation is glad to welcome visitors and show them the intricately fascinating process by which these uncanny machines are made. The Federation of Master Printers paid an official visit to these Works during this spring, and the entire party of nearly three hundred were entertained to lunch at the Canteen and taken on a tour of inspection.