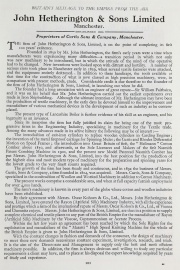 The firm of John Hetherington and Sons, Limited, is on the point of completing its first 100 years' of existence.

Founded in 183o by Mr. John Hetherington, the firm's early years were a time when manufacturers were experiencing many difficulties - a transition period in which not only was new machinery to be introduced, but in which the attitude of the mind of the operative had to be changed. New inventions were looked upon with distrust and hostility. A number of serious riots took place in Manchester early in 1829, when several textile factories were necked, and the equipment entirely destroyed. In addition to these handicaps, the tech available at the time for the construction of what is now classed as high precision machinery, were, in comparison with present methods, crude. Considerable credit is due therefore to the founder of the firm of John Hetherington and Sons, Limited, in launching out when he did.

The founder had a long association with an engineer of great repute - Sir William Fairbairn, and it was on his behalf that Mr. John Hetherington carried out the earliest experiments ever made in Iron Shipbuilding. Although the ultimate intention of Mr. Hetherington may have been the production of textile machinery, in the early days he devoted himself to the improvement and manufacture of various mechanical devices in the development of such an industry as he contemplated.

The present type of Lancashire Boiler is further evidence of his skill as an engineer, and his ingenuity as an inventor.

Since its inception the firm has fully justified its elect for being one of the most progressive firms in the Engineering Industry, specialising in machinery for the Textile trade. Among the many advances made in its active history the following may be of interest: -

The introduction of cast-iron cylinders to replace wooden cylinders in Carding Engines; the invention of the metal fireproof carriage for Spinning Mules; the Curtis and Rhodes Differential ',lotion on Speed Frames; the introduction into Great Britain of first, the "Hellmann" Cotton Comber about 1850, and afterwards, as the Sole Licensees and Makers of the first Nasmith Patent Combing Machine in 1900, and the present new .Model Patented Nasmith Comber has put Messrs. John Hetherington and Sons, Limited, into the best position for the production of the highest class and most modern type of machinery for the preparation and spinning yarns for the lowest grade to the very finest counts required.

The present works comprise a considerable area, and when at full capacity furnish employment for over 4,000 hands.

The firm's machinery is known in every part of the globe where cotton and woollen industries have been established.

By their agreement with Messrs. Oscar Kohorn and Co., Ltd., Messrs. John Hetherington and Sons, Limited, have entered the Rayon (Artificial Silk) Machinery Industry, with all the experience and prestige which a firm of the international repute of Messrs. Oscar Kohorn and Co., Ltd., of Vienna and Chemnitz enjoys. Messrs. John Hetherington and Sons, Limited, are thus in a position to supply complete chemical and textile plants to any part of the British Empire for the manufacture of Rayon (Artificial Silk) Machinery by the Viscose, Cuprammonium or Acetate Process.

Within the last few years an agreement has been reached by which the Sole Rights for the exploitation and manufacture of the "Maratti" High Speed Knitting Machine for the whole of the British Empire is given to John Hetherington and Sons, Limited.

With the content changes in fashion and demands of the consumer, the design of machinery to meet these new demands necessitates content experiment, investigation, research, and trials. It is the aim of the Directorate and Management to supply only the bat and most efficient machinery possible. In addition, the firm is always desirous and willing to Study any particular requirements a client may have, and to place at his disposal the expert knowledge acquired by years of study and experience.