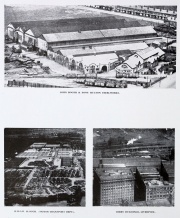 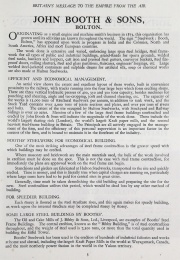 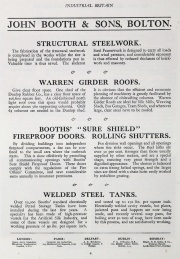 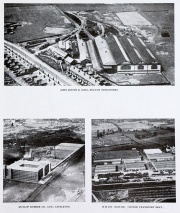 ORIGINATING as a small engine and machine smith's business in 1873, this organisation has grown until its activities are known throughout the world. The sign "Steelwork: Booth, Bolton," has appeared upon work in progress in India and the Colonies, North and South America, Africa and most European countries.

An aerial vim shows the extent and excellent layout of these works, built in convenient proximity to the railway, with trucks running into the four large bays which form erecting shops. There are three vertical hydraulic presses of 400, 330 and 300 tons capacity, besides machines for punching and shearing, angle and tee-cropping, joist and channel shearing, etc. The capacity of the works is 15,000 tons of Structural Steelwork per annum, in addition to tank work, and the Stock Yard contains over 2,000 tons of joists sections and plates, and over 300 tons of rivets and bolts. The extent of the site occupied by Hutton Steelworks, with Stockyard and Railway Sidings is over 20 acres. Mention of a few of the large Steel frame buildings constructed and erected by John Booth and Sons will indicate the magnitude of the work done. These include the world's largest skating rink (London), the world's largest Kraft paper mills, and the second heaviest Steel-frame building in Britain. The Principals are all actively engaged in the management of the firm, and the efficiency of this personal supervision is an important factor in the success of the firm, and is bound to maintain it in the forefront of the industry.

One of the most Striking advantages of Steel frame construction is the greater speed with which buildings may be erected.

Where masonry and brickwork are the main materials used, the bulk of the work involved in ere6lion must be done on the spot. This is not the case with Steel frame construction, for immediately the plans are approved work on the Steel frame can begin.

Stanchions and girders are fabricated at Hulton Steelworks, transported to the site and quickly erected. Time is money, and this is literally true when capital charges are running on, particularly where large sums have had to be paid for central sites in great cities.

Generally, time must be taken demolishing the old building and preparing the site for the new. Steel construction utilises this period, which would be dead loss by any other method of building.

Each Storey is floored as the Steel Structure rises, and this again makes for speedy building, as work upon the internal Structure may be completed Storey by Storey.

SOME LARGE STEEL BUILDINGS BY BOOTHS'.

The Oil and Cake Mills of J. Bibby and Sons, Ltd., Liverpool, are examples of Booths' Steel Frame Buildings. The central erection, known as the "Bibby Building," is of Steel construction throughout, and the weight of Steel used is 7,200 tons, or more than the total quantity used in building the Eiffel Tower.

Booths' Steelwork has been used in the erection of hundreds of industrial factories and works at home and abroad, including the largest Kraft Paper Mills in the world at Wayagamack, Canada, and the most northerly power station in the world in the Yukon territory.