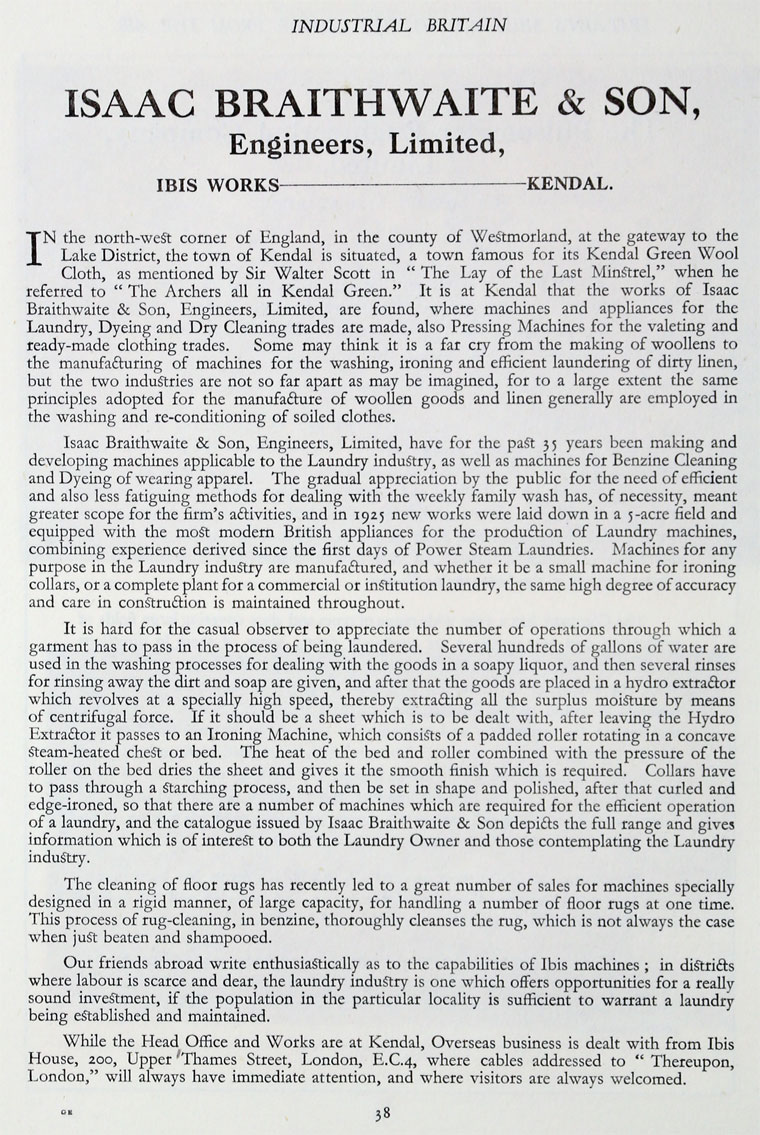 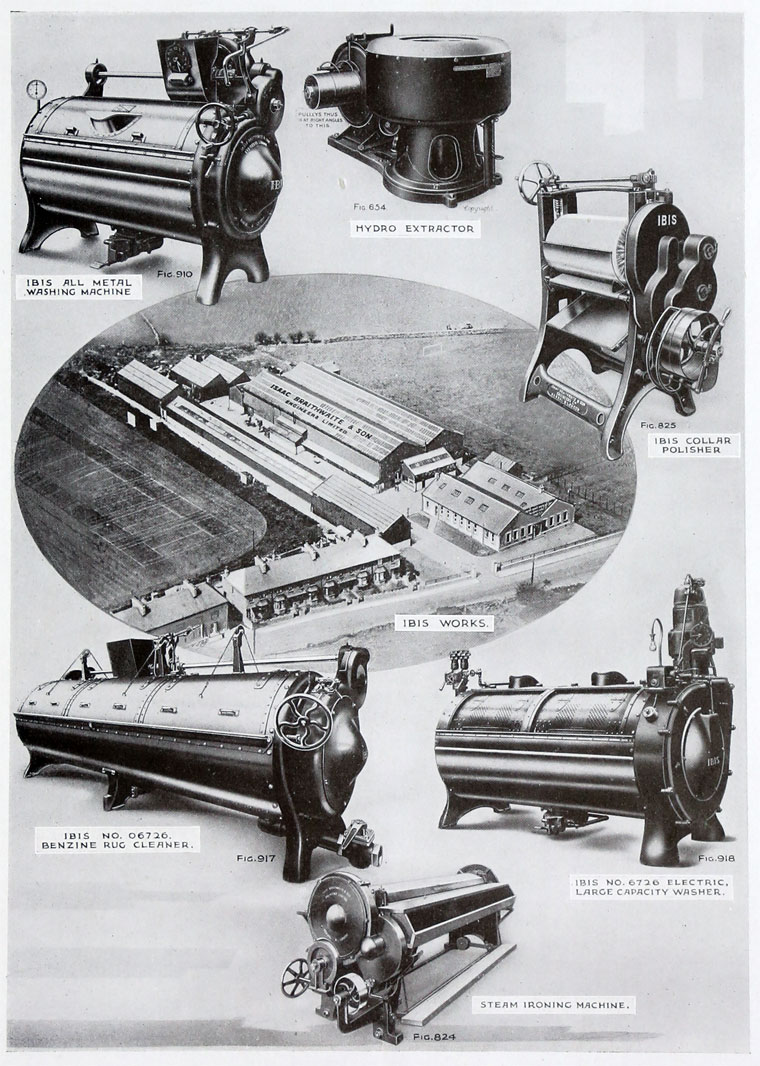 In the north-west corner of England, in the county of Westmorland, at the gateway to the Lake District, the town of Kendal is situated, a town famous for its Kendal Green Wool Cloth, as mentioned by Sir Walter Scott in "The Lay of the Last Minstrel," when he referred to "The Archers all in Kendal Green." It is at Kendal that the works of Isaac Braithwaite and Son, Engineers, Limited, arc found, where machines and appliances for the Laundry, Dyeing and Dry Cleaning trades arc made, also Pressing Machines for the valeting and ready-made clothing trades. Some may think it is a far cry from the making of woollens to the manufacturing of machines for the washing, ironing and efficient laundering of dirty linen, but the two industries arc not so far apart as may be imagined, for to a large extent the same principles adopted for the manufa6ture of woollen goods and linen generally arc employed in the washing and re-conditioning of soiled clothes.

Isaac Braithwaite and Son, Engineers, Limited, have for the past 35 years been making and developing machines applicable to the Laundry industry, as well as machines for Benzine Cleaning and Dyeing of wearing apparel. The gradual appreciation by the public for the need of efficient and also less fatiguing methods for dealing with the weekly family wash has, of necessity, meant greater scope for the firm's activities, and in 1925 new works were kid down in a 5-acre field and equipped with the most modern British appliances for the production of Laundry machines, combining experience derived since the first days of Power Steam Laundries. Machines for any purpose in the Laundry industry are manufactured, and whether it be a small machine for ironing collars, or a complete plant for a commercial or institution laundry, the same high degree of accuracy and care in construction is maintained throughout.

It is hard for the casual observer to appreciate the number of operations through which a garment has to pass in the process of being laundered. Several hundreds of gallons of water are used in the washing processes for dealing with the goods in a soapy liquor, and then several rinses for rinsing away the dirt and soap are given, and after that the goods arc placed in a hydro extractor which revolves at a specially high speed, thereby extracting all the surplus moisture by means of centrifugal force. If it should be a sheet which is to be dealt with, after leaving the Hydro Extractor it passes to an Ironing Machine, which consists of a padded roller rotating in a concave steam-heated chest or bed. The heat of the bed and roller combined with the pressure of the roller on the bed dries the sheet and gives it the smooth finish which is required. Collars have to pass through a starching process, and then be set in shape and polished, after that curled and edge-ironed, so that there arc a number of machines which are required for the efficient operation of a laundry, and the catalogue issued by Isaac Braithwaite and Son depicts the full range and gives information which is of interest to both the Laundry Owner and those contemplating the Laundry industry.

The cleaning of floor rugs has recently led to a great number of sales for machines specially designed in a rigid manner, of large capacity, for handling a number of floor rugs at one time. This process of rug-cleaning, in benzine, thoroughly cleanses the rug, which is not always the case when lust beaten and shampooed.

Our friends abroad write enthusiastically as to the capabilities of Ibis machines; in districts where labour is scarce and dear, the laundry industry is one which offers opportunities for a really sound investment, if the population in the particular locality is sufficient to warrant a laundry being established and maintained.

While the Head Office and Works are at Kendal, Overseas business is dealt with from Ibis House, zoo, Upper Thames Street, London, E.C.4, where cables addressed to "Thereupon, London," will always have immediate attention, and where visitors arc always welcomed.