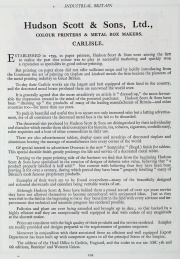 Established in 1799, as paper printers, Hudson Scott and Sons were among the first to realise the part that colour was to play in successful marketing and quickly won a reputation as specialists in good colour printing.

But printing on paper alone did not offer sufficient scope and by boldly introducing from the Continent the art of printing on tinplate and kindred metals the firm became the pioneers of the metal printing industry in Great Britain.

To-day their Carlisle works are the largest and best equipped of their kind in the country, and the decorated metal boxes produced there are renowned the world over.

It is generally agreed that the more attractively an article is "dressed up," the more favourable the impression created in the mind of the potential purchaser. Hudson Scott and Sons have been "dressing up" the products of many of the leading manufacturers of Britain - and other countries too - for more than 130 years.

To pack in beautiful and useful tins is to secure not only increased sales but a lasting advertisement, for of all containers the decorated metal box is the last to be discarded.

The decorated tins produced by Hudson Scott and Sons are distinguished by their individuality and character which render them ideal containers for biscuits, tea, tobacco, cigarettes, confectionery, toilet requisites and a host of other commodities in daily use.

There are also advertisement tablets, display cases and novelties of decorated tinplate and aluminium bearing the message of manufacturers into every corner of the world.

Of special interest to advertisers overseas is the new "Sempridur" (Regd.) finish for tablets. This special durable finish greatly prolongs the life and service of a decorated metal tablet.

Turning to the paper printing side of the business we find that from the beginning Hudson Scott and Sons have specialised in the creation of designs of definite sales value, believing that "a product properly labelled is half sold." Not content with believing thus they have been busy proving it for over a century, during which period they have been " properly labelling" many of Britain's 0010 famous proprietary products.

Examples of their work are to be found everywhere - many of the beautifully designed and coloured showcards and calendars being veritable works of art.

Although Hudson Scott and Sons have behind them a proud record of over 530 years service they have not allowed themselves to become encumbered with antiquated ideas. Just as they were first in the field at the beginning so have they been first in the field with every advance and improvement that technical and scientific progress has rendered possible.