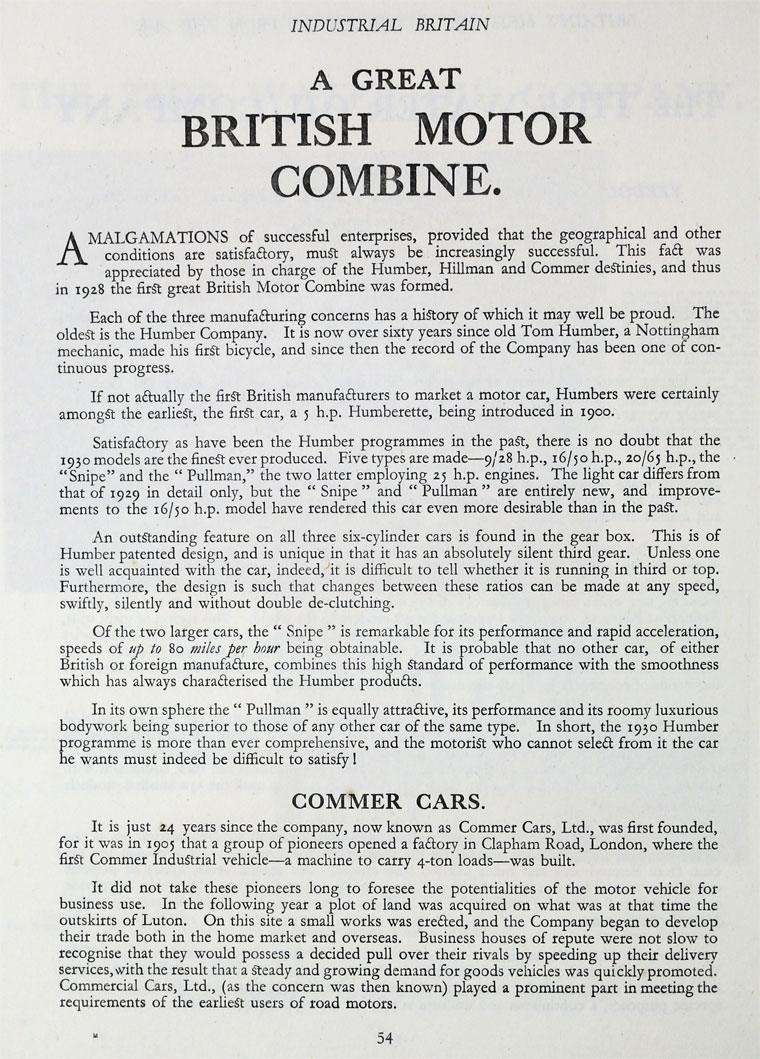 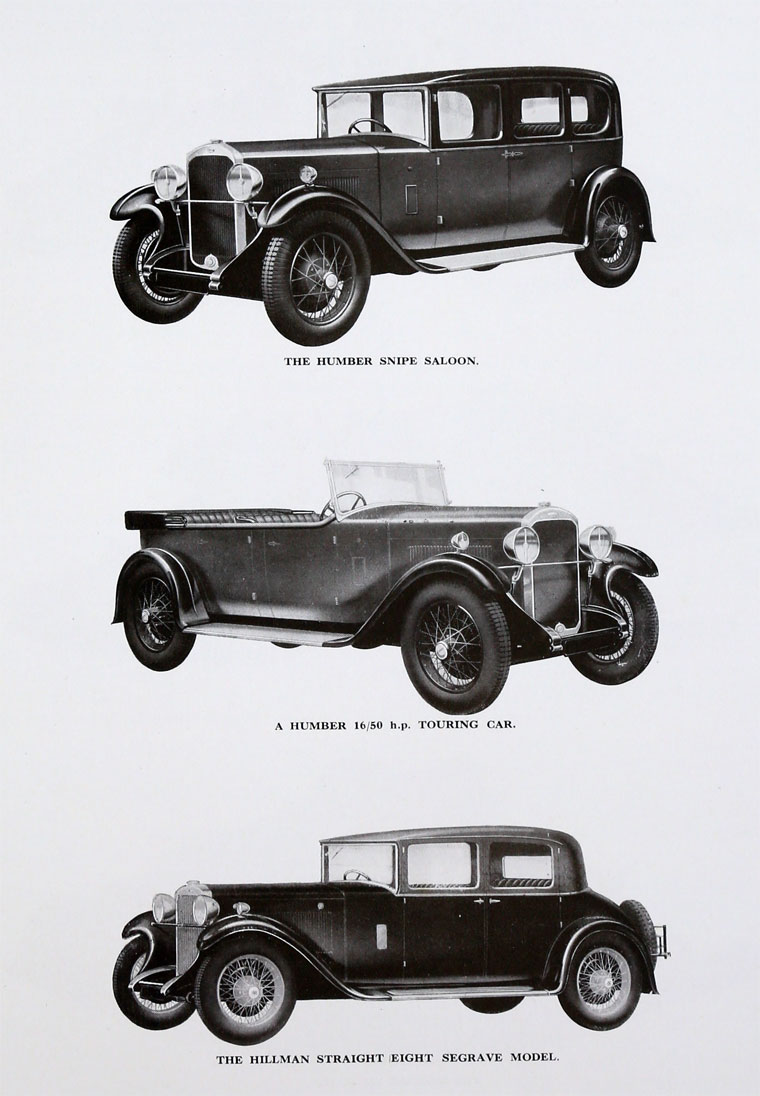 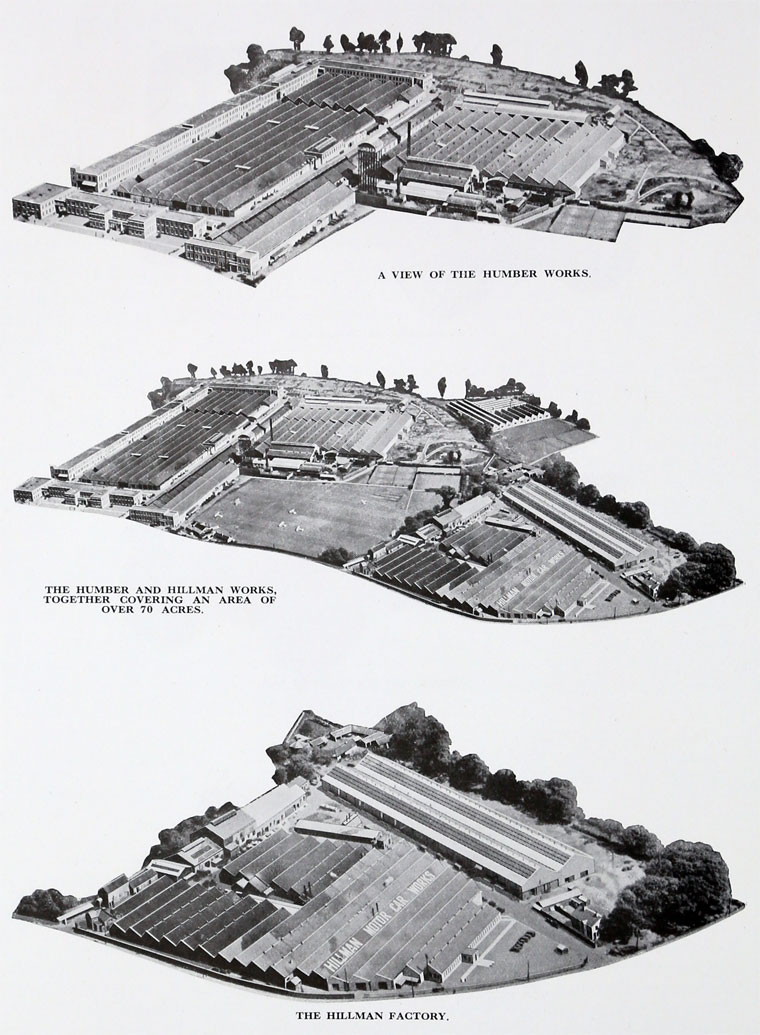 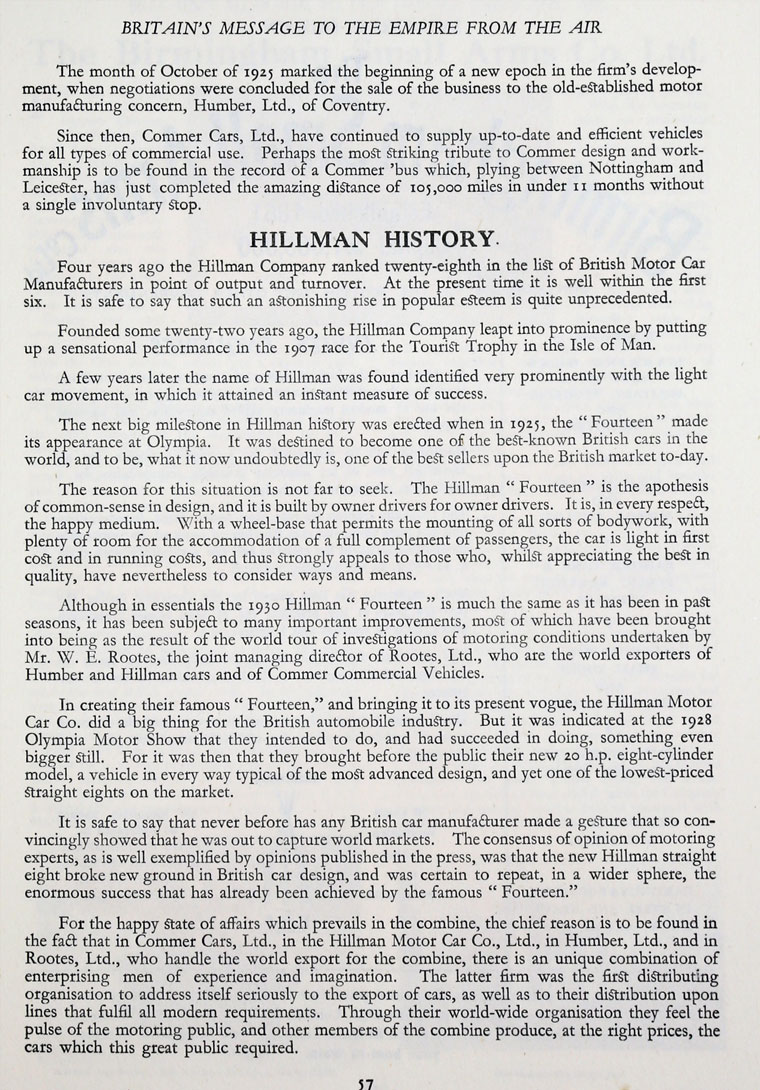 AMALGAMATIONS of successful enterprises, provided that the geographical and other conditions are satisfactory, must always be increasingly successful. This fact was appreciated by those in charge of the Humber, Hillman and Commer destinies, and thus in 1928 the first great British Motor Combine was formed.

Each of the three manufacturing concerns has a history of which it may well be proud. The oldest is the Humber Company. It is now over sixty years since old Tom Humber, a Nottingham mechanic, made his first bicycle, and since then the record of the Company has been one of continuous progress.

If not actually the first British manufacturers to market a motor car, Humbers were certainly amongst the earliest, the first car, a 5 h.p. Humberette, being introduced in 1900.

Satisfactory as have been the Humber programmes in the past, there is no doubt that the 1930 models are the finest ever produced. Five types are made - 9/28 h.p., 16/50 h.p., 20/65 h.p., the "Snipe" and the "Pullman," the two latter employing 25 h.p. engines. The light car differs from that of 1929 in detail only, but the "Snipe" and "Pullman" are entirely new, and improvements to the 16/5o h.p. model have rendered this car even more desirable than in the past.

An outstanding feature on all three six-cylinder cars is found in the gear box. This is of Humber patented design, and is unique in that it has an absolutely silent third gear. Unless one is well acquainted with the car, indeed, it is difficult to tell whether it is running in third or top. Furthermore, the design is such that changes between these ratios can be made at any speed, swiftly, silently and without double de-clutching.

Of the two larger cars, the "Snipe" is remarkable for its performance and rapid acceleration, speeds of up to 80 miles per hour being obtainable. It is probable that no other car, of either British or foreign manufacture, combines this high Standard of performance with the smoothness which has always characterised the Humber products.

In its own sphere the "Pullman" is equally attractive, its performance and its roomy luxurious bodywork being superior to those of any other car of the same type. In short, the 1930 Humber programme is more than ever comprehensive, and the motorist who cannot select from it the car he wants must indeed be difficult to satisfy!

It is just 24 years since the company, now known as Commer Cars, Ltd., was first founded, for it was in 1905 that a group of pioneers opened a factory in Clapham Road, London, where the first Commer Industrial vehicle - a machine to carry 4-ton loads - was built.

It did not take these pioneers long to foresee the potentialities of the motor vehicle for business use. In the following year a plot of land was acquired on what was at that time the outskirts of Luton. On this site a small works was erected, and the Company began to develop their trade both in the home market and overseas. Business houses of repute were not slow to recognise that they would possess a decided pull over their rivals by speeding up their delivery services, with the result that a Steady and growing demand for goods vehicles was quickly promoted. Commercial Cars, Ltd., (as the concern was then known) played a prominent part in meeting the requirements of the earliest users of road motors.

The month of October of 1925 marked the beginning of a new epoch in the firm's development, when negotiations were concluded for the sale of the business to the old-established motor manufacturing concern, Humber, Ltd., of Coventry.

Since then, Commer Cars, Ltd., have continued to supply up-to-date and efficient vehicles for all types of commercial use. Perhaps the most Striking tribute to Commer design and workmanship is to be found in the record of a Commer 'bus which, plying between Nottingham and Leicester, has just completed the amazing distance of 105,000 miles in under 11 months without a single involuntary stop.

Four years ago the Hillman Company ranked twenty-eighth in the lid of British Motor Car Manufacturers in point of output and turnover. At the present time it is well within the first six. It is safe to say that such an astonishing rise in popular esteem is quite unprecedented.

Founded some twenty-two years ago, the Hillman Company leapt into prominence by putting up a sensational performance in the 1907 race for the Tourist Trophy in the Isle of Man.

The next big milestone in Hillman history was created when in 1925, the "Fourteen" made its appearance at Olympia. It was destined to become one of the best-known British cars in the world, and to be, what it now undoubtedly is, one of the bat sellers upon the British market to-day.

The reason for this situation is not far to seek. The Hillman "Fourteen" is the apothesis of common-sense in design, and it is built by owner drivers for owner drivers. It is, in every respect, the happy medium. With a wheel-base that permits the mounting of all sorts of bodywork, with plenty of room for the accommodation of a full complement of passengers, the car is light in first cost and in running costs, and thus Strongly appeals to those who, whi1B appreciating the best in quality, have nevertheless to consider ways and means.

Although in essentials the 1930 Hillman " Fourteen " is much the same as it has been in past seasons, it has been subject to many important improvements, most of which have been brought into being as the result of the world tour of investigations of motoring conditions undertaken by Mr. W. E. Rootes, the joint managing director of Rootes, Ltd., who are the world exporters of Humber and Hillman cars and of Commer Commercial Vehicles.

In creating their famous "Fourteen," and bringing is in its present vogue, the Hillman Motor Car Co. did a big thing for the British automobile industry. But it was indicated at the 1958 Olympia Motor Show that they intended to do, and had succeeded in doing, something even bigger Bill. For it was then that they brought before the public their new 20 h.p. eight-cylinder model, a vehicle in every way typical of the most advanced design, and yet one of the lowest-priced Straight eights on the market.

It is safe to say that never before has any British car manufacturer made a gesture that so convincingly showed that he was out to capture world markets. The consensus of opinion of motoring experts, as is well exemplified by opinions published in the press, was that the new Hillman straight eight broke new ground in British car design, and was certain to repeat, in a wider sphere, the enormous success that has already been achieved by the famous "Fourteen."

For the happy state of affairs which prevails in the combine, the chief reason is to be found in the fact that in Commer Cars, Ltd., in the Hillman Motor Car Co., Ltd., in Humber, Ltd., and in Rootes, Ltd., who handle the world export for the combine, there is an unique combination of enterprising men of experience and imagination. The latter firm was the first distributing organisation to address itself seriously to the export of cars, as well as to their distribution upon lines that fulfil all modern requirements. Through their world-wide organisation they feel the pulse of the motoring public, and other members of the combine produce, at the right prices, the cars which this great public required.