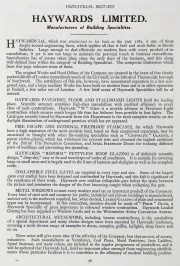 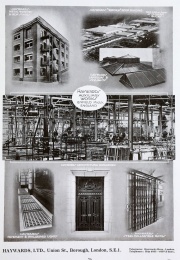 HAYWARDS Ltd., which was established so far back as the year 1783, is one of those deeply-rooted engineering firms, which typifies all that is best and most stable in British Industry. Large enough to deal efficiently on modern lines with every product of its manufacture, it yet is not too large to maintain the personal touch in business transactions. Specialisation has of course taken place since the early days of the business, and this along well-defined lines within the category of Building Specialities. The composite illustration which faces this page indicates some of these.

The original Works and Head Offices of the Company arc situated in the heart of that closely packed district of London immediately south of the City itself, in the historical Thames-side borough of Southwark. The restrictions of this site, however, have necessitated expansion in a less congested area, and a large auxiliary Works has been built on modern lines and is in active operation at Enfield, a few miles out of London. A few brief notes of Haywards Specialities will be of interest

HAYWARDS PAVEMENT, FLOOR AND STALLBOARD LIGHTS hold the leading place. Scientific accuracy combines high-class manufacture with practical efficiency in every class of such constructions. Haywards "W" Glass is a notable advance in Pavement Light construction which ensures much longer life than has hitherto been possible in lens lights. The Catalogue recently issued by Haywards from this Department is the most complete treatise on the daylight illumination of underground premises which has yet appeared.

FIRE ESCAPE AND INTERNAL FIREPROOF STAIRCASES, for which Haywards have a high reputation of the most enviable kind, based on their exceptional experience, may be associated in thought with other fire-resisting specialities such as "COPPERLITE" GLAZING, a patent electro-glazing which has withstood the severest tests and obtained the highest certificate of the British Fire Prevention Committee, and STEEL FIREPROOF DOORS for isolating different parts of buildings and preventing fire spreading.

HAYWARDS "REFORM" PUTTYLESS ROOF GLAZING is of definitely scientific design, "drop-dry," easy to fix and weatherproof under all conditions. It is suitable for covering large or small areas and is largely used in the form of lanterns and skylights as well as for complete roofs.

COLLAPSIBLE STEEL GATES arc supplied in every type and size. Some of the largest gates ever erected have been designed and constructed by Haywards, and this fact is significant of the excellence of their work. Haywards new mid-bar collapsible gate halves the space between the pickets and minimises the danger of the foot becoming caught when collapsing the gate.

METAL WINDOWS to meet every modem need arc an important product of the Company. Every kind of steel sash and casement for public, industrial and private buildings is manufactured, and not only is the steelwork supplied, but, when desired, LEADED GLAZING of plain and ornamental types can be incorporated. In this connection, mention should be made of "PRIOR" GLASS, a Haywards Speciality of great importance in coloured window construction. Haywards Leaded Glazing has been supplied to Windsor Castle and to the Westminster Abbey Coronation Annexe.

ARCHITECTURAL METALWORK, including bronze constructions, is the production of a special department and many choice designs have been executed by Haywards craftsmen, covering a most diverse range of examples in doors, canopies, grilles, laylights, shop fronts and so on.

These notes will give some idea of the activities of the Company, but they arc not, of course, exhaustive. Such manufactures as Ventilators, Coal Plates, ,Metal Partitions, Iron Ladders, Spiral Staircase, and many others, are included in the regular programme of production, and it Rill be gathered that Haywards Ltd., hold an important place amongst those engineering establishments whose particular function it is to contribute to the efficiency of modern building practice.