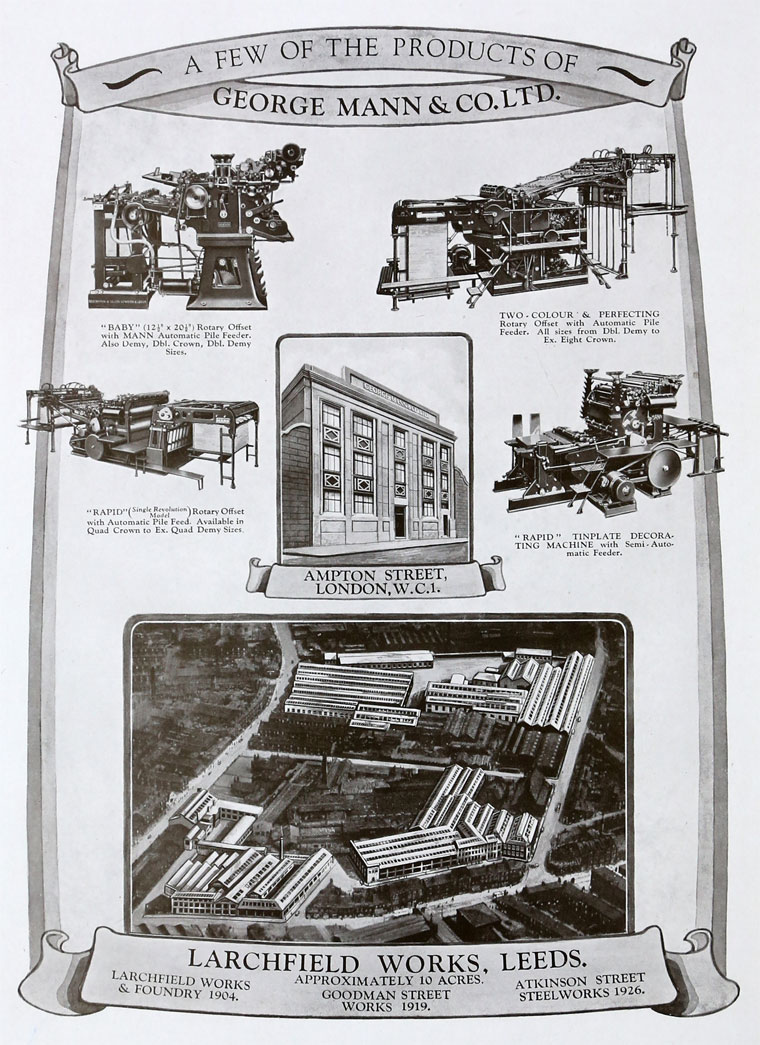 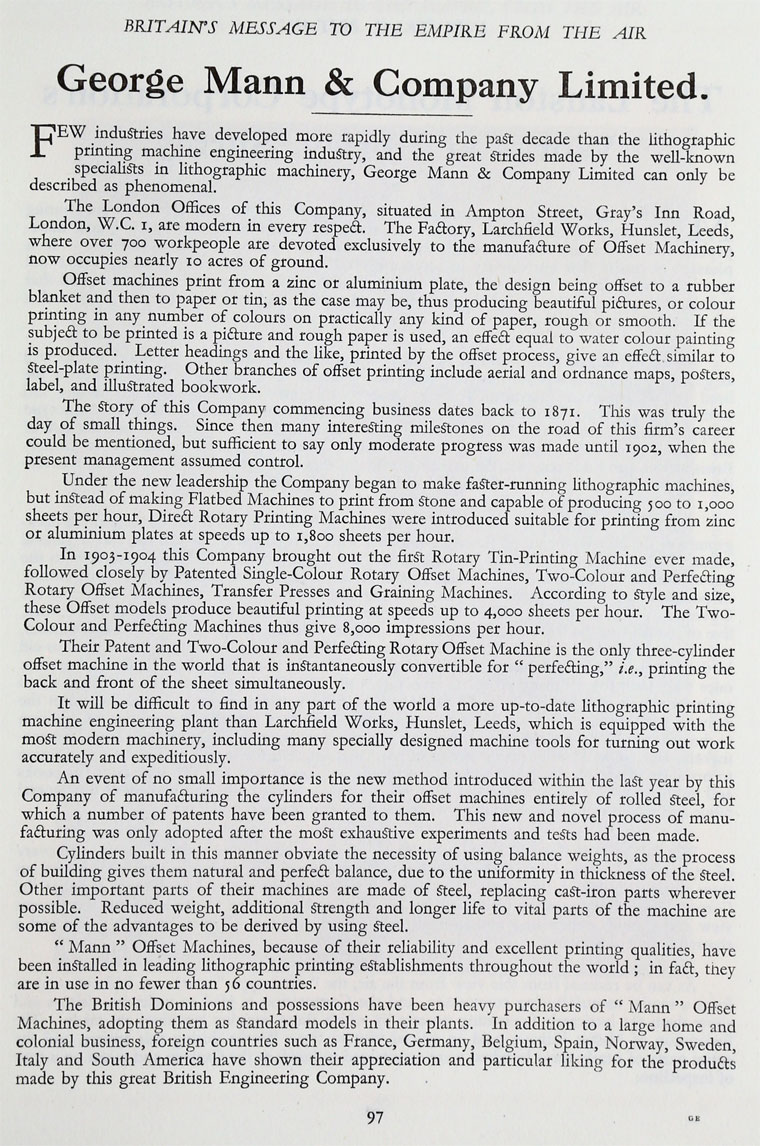 FEW industries have developed more rapidly during the past decade than the lithographic printing machine engineering industry, and the great Strides made by the well-known specialists in lithographic machinery, George Mann and Company Limited can only be described as phenomenal.

The London Offices of this Company, situated in Ampton Street, Gray's Inn Road, London, W.C.1., are modern in every respect. The Factory, Larchfield Woks, Hunslet, Leeds, where over 700 workpeople are devoted exclusively to the manufacture of Offset Machinery, now occupies nearly to acres of ground.

Offset machines print from a zinc or aluminium plate, the design being offset to a rubber blanket and then to paper or tin, as the case may be, thus producing beautiful pictures, or colour printing in any number of colours on practically any kind of paper, rough or smooth. If the subject to be printed is a picture and rough paper is used, an effect equal to water colour painting is produced. Letter headings and the like, printed by the offset process, give an effect similar to Steel-plate printing. Other branches of offset printing include aerial and ordnance maps, potters, label, and illustrated bookwork.

The Story of this Company commencing business dates back to 187x. This was truly the day of small things. Since then many interesting milestones on the road of this firm's career could be mentioned, but sufficient to say only moderate progress was made until 19oz, when the present management assumed control.

Under the new leadership the Company began to make faster-running lithographic machines, but instead of making Flatbed Machines to print from stone and capable of producing 500 to 1,000 sheets per hour, Direct Rotary Printing Machines were introduced suitable for printing from zinc or aluminium plates at speeds up to 1,800 sheets per hour.

In 1903-19o4 this Company brought out the firs Rotary Tin-Printing Machine ever made, followed closely by Patented Single-Colour Rotary Offset Machines, Two-Colour and Perfecting Rotary Offset Machines, Transfer Presses and Graining Machines. According to Style and size, these Offset models produce beautiful printing at speeds up to 4,00o sheets per hour. The Two- Colour and Peddling Machines thus give 8,000 impressions per hour.

Their Patent and Two-Colour and Peddling Rotary Offset -Machine is the only three-cylinder offset machine in the world that is instantaneously convertible for "peddling," i.e., printing the back and front of the sheet simultaneously.

It will be difficult to find in any part of the world a more up-to-date lithographic printing machine engineering plant than Larchfield Works, Hunslet, Leeds, which is equipped with the most modern machinery, including many specially designed machine tools for turning out work accurately and expeditiously.

An event of no small importance is the new method introduced within the last year by this Company of manufacturing the cylinders for their offset machines entirely of rolled steel, for which a number of patents have been granted to them. This new and novel process of manufacturing was only adopted after the most exhaustive experiments and tests had been made.

Cylinders built in this manner obviate the necessity of using balance weights, as the process of building gives them natural and pedal balance, due to the uniformity in thickness of the Steel. Other important parts of their machines are made of Steel, replacing cast-iron parts wherever possible. Reduced weight, additional Strength and longer life to vital parts of the machine are some of the advantages to be derived by using Steel.

"Mann" Offset Machines, because of their reliability and excellent printing qualities, have been installed in leading lithographic printing establishments throughout the world; in fact, they are in use in no fewer than 56 countries.

The British Dominions and possessions have boon heavy purchasers of "Mann" Offset Machines, adopting them as Standard models in their plants. In addition to a large home and colonial business, foreign countries such as France, Germany, Belgium, Spain, Norway, Sweden, Italy and South America have shown their appreciation and particular liking for the products made by this great British Engineering Company.