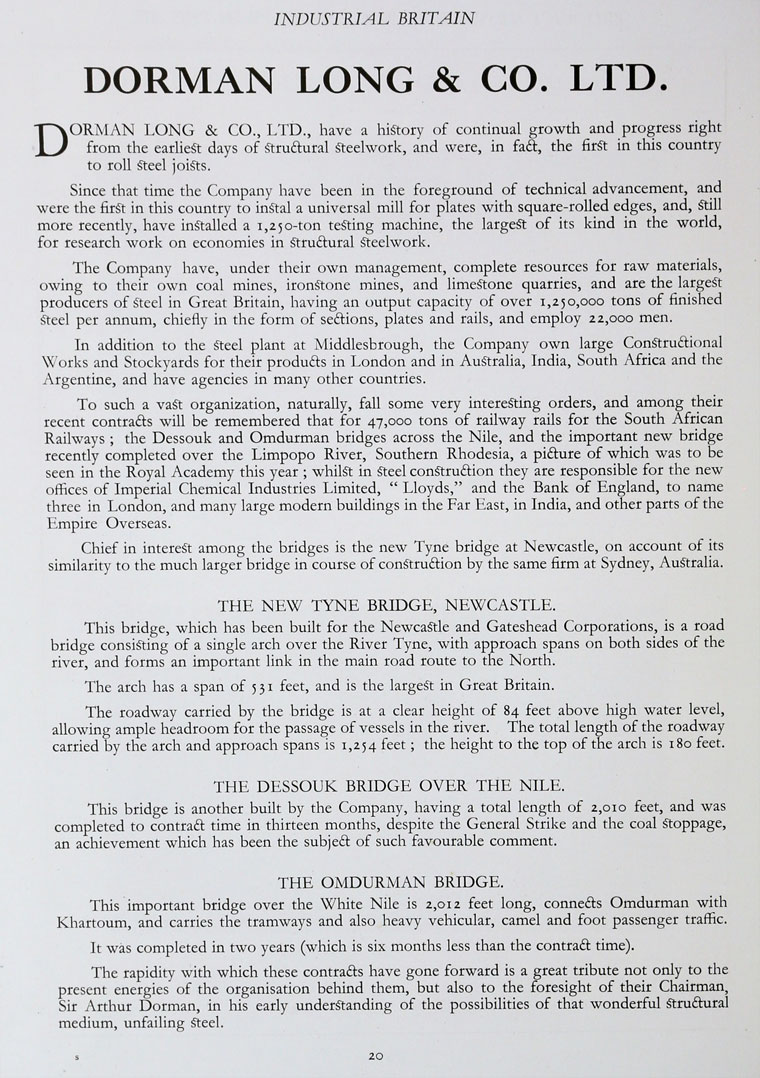 .....the first in this country to roll steel joists.

Since that time the Company have been in the foreground of technical advancement, and were the first in this country to install a universal mill for plates with square-rolled edges, and, still more recently, have installed a 1,250-ton testing machine, the largest of its kind in the world, for research work on economies in Structural Steelwork.

The Company have, under their own management, complete resources for raw materials, owing to their own coal mines, ironstone mines, and limestone quarries, and are the largest producers of steel in Great Britain, having an output capacity of over 1,250,000 tons of finished Steel per annum, chiefly in the form of sections, plates and rails, and employ 22,000 men.

In addition to the Steel plant at Middlesbrough, the company own large Constructional Works and Stockyards for their products in London and in Australia, India, South Africa and the Argentine, and have agencies in many other countries.

To such a vast organization, naturally, fall some very interesting orders, and among their recent contracts will be remembered that for 47,555 tons of railway rails for the South African Railways; the Dessouk and Omdurman bridges across the Nile, and the important new bridge recently completed over the Limpopo River, Southern Rhodesia, a picture of which was to be seen in the Royal Academy this year; whilst in steel construction they are responsible for the new offices of Imperial Chemical Industries Limited, "Lloyds," and the Bank of England, to name three in London, and many large modern buildings in the Far East, in India, and other parts of the Empire Overseas………

This bridge, which has been built for the Newcastle and Gateshead Corporations, is a road bridge consisting of a single arch over the River Tyne, with approach spans on both sides of the river, and forms an important link in the main road route to the North.

The arch has a span of 531 feet, and is the largest in Great Britain.

THE DESSOUK BRIDGE OVER THE NILE.

This bridge is another built by the Company, having a total length of 2,010, feet, and was completed to contract time in thirteen months, despite the General Strike and the coal stoppage, an achievement which has been the subject of such favourable comment.

This important bridge over the White Nile is 2,012 feet long, connects Omdurman with Khartoum, and carries the tramways and also heavy vehicular, camel and foot passenger traffic.

It was completed in two years (which is six months less than the contract time).

The rapidity with which these contracrs have gone forward is a great tribute not only to the present energies of the organisation behind them, but also to the foresight of their Chairman, Sir Arthur Dorman, in his early understanding of the possibilities of that wonderful structural medium, unfailing steel.