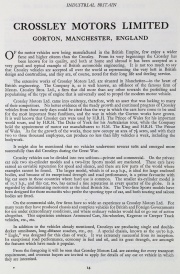 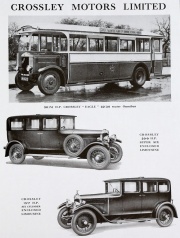 Of the motor vehicles now being manufactured in the British Empire, few enjoy a wider fame and higher esteem than the Crossley. From its very beginnings the Crossley has been known for its quality, and both at home and abroad it has been accepted as a very good and typical example of British automobile engineering. It is not too much to say that Crossley vehicles are accepted all over the world as representing the very best in British design and construction, and they are, of course, noted for their long life and sterling service.

The extensive works of Crossley Motors Ltd. are situated in Manchester - in the heart of British engineering. The Company is, as is well known, an offshoot of the famous firm of Messrs. Crossley Bros. Ltd., a firm that did more than any other towards the perfecting and popularising of the type of engine that is universally used to propel the modern motor vehicle.

Crossley Motors Ltd. came into existence, therefore, with an asset that was lacking to many of their competitors. No better evidence of the Steady growth and continued progress of Crossley vehicles from those early days could be cited than the way in which the cars have come to be used for the most important State fun6tions, and the way in which the Gorton works have grown. It is well known that Crossley cars were used by H.R.H. The Prince of Wales for his important world tours, and by H.R.H. The Duke of York for his Australasian tour, while the Company hold the appointment of motor car manufa6turers to H.M. The King and H.R.H. The Prince of Wales. As for the growth of the works, these now occupy an area of 7.5 acres, and with their two to three thousand employees, can produce no less than fifty vehicles a week, including the bodywork.

It might also be mentioned that no vehicles underwent severer tests and emerged more successfully than did Crossleys during the Great War.

Crossley vehicles can be divided into two se6tions - private and commercial. On the private car side two six-cylinder models and a two-litre Sports model are marketed. These cars have earned an enviable reputation for speed and silence, and there are few parts of the world where examples cannot be found. The larger model, which is of zo.9 h.p., is ideal for large enclosed bodies, and because of its exceptional strength and road performance, is a prime favourite with big car users in those countries where hard use is common. The smaller six-cylinder model is of 15.7 h.p., and this car, too, has earned a fine reputation in every quarter of the globe. It is regarded by discriminating motorists as the ideal British Six. The Two-litre Sports models have been designed for those motorists who prefer the sporting type of car, and both touring and saloon bodies are fitted.

On the commercial side, few firms have so wide an experience as Crossley Motors Ltd. For many years they have produced chassis and complete vehicles for British and Foreign Governments for use under extraordinary conditions, and where ordinary vehicles would fail or go out of action altogether. This experience embraces Armoured Cars, Six-wheelers, Kegresse or Creeper Track vehicles, etc., etc.

In addition to the vehicles already mentioned, Crossleys are producing single and double-decker omnibuses, long-distance coaches, etc., etc. A special chassis, known as the 30/70 h.p. "Eagle," was designed for this class of work. It was extremely successful from its inception. Its exceptional road performance, economy in fuel and oil, and its great strength, are amongst the features which have made it popular.

From the foregoing it will be seen that Crossley Motors Ltd. are catering for every transport requirement, and overseas buyers are invited to apply for details of any car or vehicle in which they are interested.