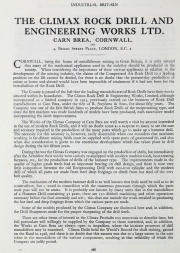 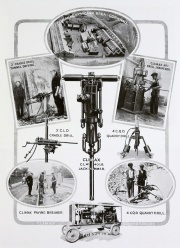 CORNWALL, being the home of metalliferous mine in Great Britain, it is only natural that many of the mechanical appliances used in the industry should be produced in the county. When considering the importance of these various appliances in relation to the

development of the mining industry, the claims of the Compressed Air Rock Drill to a leading position on the lift cannot be denied, for there is no doubt that the present-day production of mines at home and abroad would have been impossible of attainment if it had not been for the introduction of the Rock Drill.

The County is proud of the fait that the leading manufacturers of Rock Drills have their works situated within its boundaries. The Climax Rock Drill and Engineering Works, Limited, although incorporated as a limited company in 1913, previously carried on the business of Rock Drill manufacturers at Cam Brea, under the title of R. Stephens and Sons, for about fifty years. The Company was one of the first British firms to produce Rock Drills of the reciprocating type, and since the first machine was made hundreds of models have been produced, each successive model incorporating the late improvements.

The Works of the Climax Company at Carn Brea are well worth a visit by anyone interested in the use of modern Rock Drills, and it will no doubt come as a surprise to ma, to sec the care and accuracy required in the production of the ma, parts which go to make up a hammer drill. The necessity for this accuracy is, however, easily discernible when one considers that machines working in far-distant mining fields must be supplied with spare parts of guaranteed fit, and also when due consideration is given to the enormous development which has taken place in drill design during the last fifteen years.

During the war the Climax Company was engaged on the production of shells, but immediately after the Armistice their works were entirely re-equipped with modern machine tools, heat-treating furnaces, etc., for the production of drills of the hammer type. The improvements made in the quality of higher grade Steels had an important bearing on drill design, and there is now very little comparison between the old Reciprocating Drill with cast-iron cylinder and the modern drill of which all parts are made from Steel drop forgings or direct from bar steel of the very best quality.

The mechanism of the modern hammer drill is so well known that little need be said as to its construction, but a word in connection with the numerous processes through which the parts must pass will not be amiss. It is probably not known by many users that in the manufacture of a Hammer Drill containing 31 parts, there are 150 distinct machining and other operations necessary before the final assembly and test; this does not include the work entailed in producing the bar Steel and drop forgings from which the various parts are made.

Some of the models produced by the Climax Company are illustrated here and, in addition, the Drill Sharpeners made for the proper sharpening of the drill Steels.

There are other items of interest in the Climax Products too numerous to describe here, but full particulars will willingly be supplied by the Company to those interested, and, in addition, the Works at Carn Brea are always open to inspection, where the intricate processes of drill manufacture may be examined. Climax Drills hold the World's Record for shaft sinking, gained on the Rand in 1926, and there is no doubt that this success was due to a large extent to the care taken in the manufacture of the various components, resulting in that reliability of which the Company are justly proud.