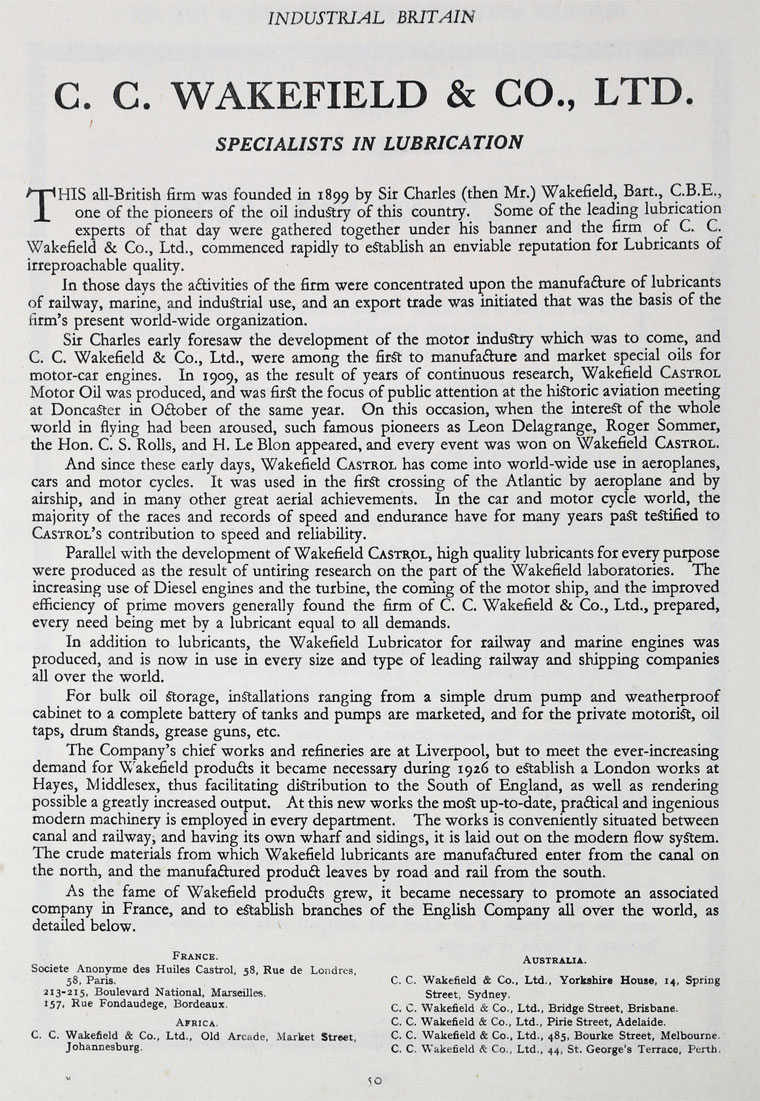 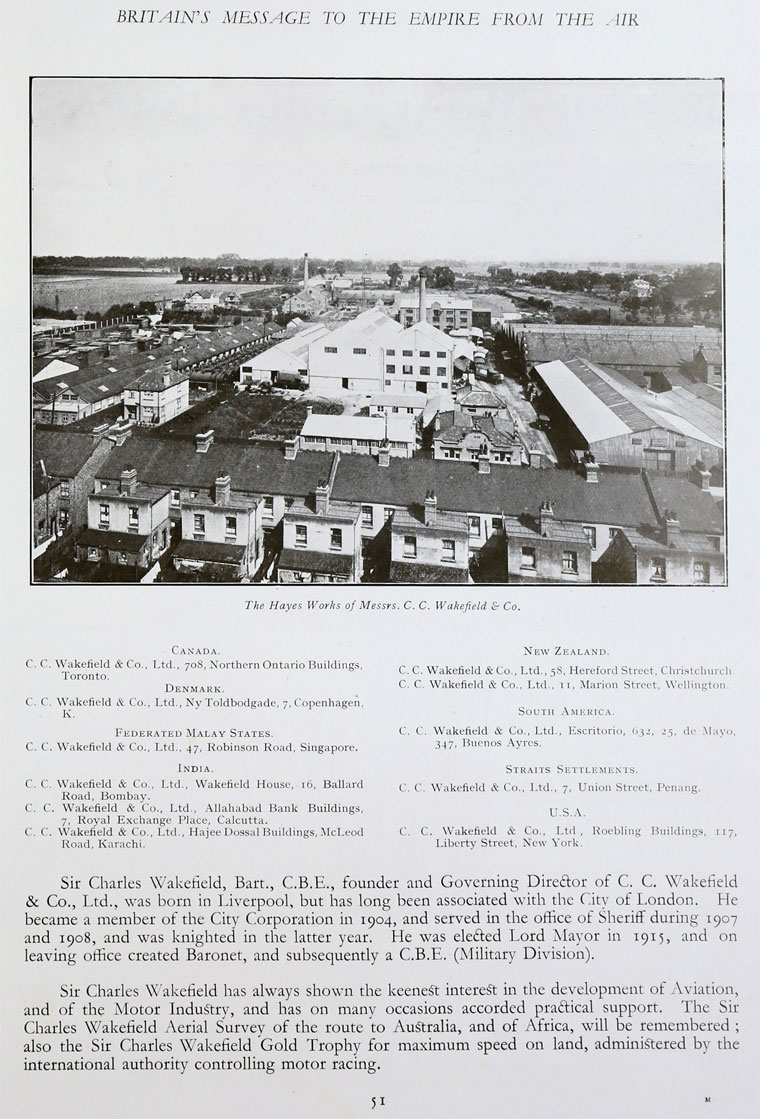 This all-British firm was founded in 1899 by Sir Charles (then Mr.) Wakefield, Bart., C.B.E., one of the pioneers of the oil industry of this country. Some of the leading lubrication experts of that day were gathered together under his banner and the firm of C. C. Wakefield and Co., Ltd., commenced rapidly to establish an enviable reputation for Lubricants of irreproachable quality.

In those days the activities of the firm were concentrated upon the manufacture of lubricants of railway, marine, and industrial use, and an export trade was initiated that was the basis of the firm's present world-wide organization.

Sir Charles early foresaw the development of the motor industry which was to come, and C. C. Wakefield and Co., Ltd., were among the first to manufacture and market special oils for motor-car engines. In 19o9, as the result of years of continuous research, Wakefield CASTROL Motor Oil was produced, and was first the focus of public attention at the historic aviation meeting at Doncaster in 06tober of the same year. On this occasion, when the interest of the whole world in flying had been aroused, such famous pioneers as Leon Delagrange, Roger Sommer, the Hon. C. S. Rolls, and H. Le Blon appeared, and every event was won on Wakefield CASTROL.

And since these early days, Wakefield CASTROL has come into world-wide use in aeroplanes, cars and motor cycles. It was used in the first crossing of the Atlantic by aeroplane and by airship, and in ma, other great aerial achievements. In the car and motor cycle world, the majority of the races and records of speed and endurance have for many years past testified to CASTROL'S contribution to speed and reliability.

Parallel with the development of Wakefield CASTROL, high quality lubricants for every purpose were produced as the result of untiring research on the part of the Wakefield laboratories. The increasing use of Diesel engines and the turbine, the coming of the motor ship, and the improved efficiency of prime movers generally found the firm of C. C. Wakefield and Co., Ltd., prepared, every need being met by a lubricant equal to all demands.

In addition to lubricants, the Wakefield Lubricator for railway and marine engines was produced, and is now in use in every size and type of leading railway and shipping companies all over the world.

For bulk oil Storage, installations ranging from a simple drum pump and weatherproof cabinet to a complete battery of tanks and pumps are marketed, and for the private motorist, oil taps, drum stands, grease guns, etc.

The Company's chief works and refineries are at Liverpool, but to meet the ever-increasing demand for Wakefield products it became necessary during 1926 to establish a London works at Hayes, Middlesex, thus facilitating distribution to the South of England, as well as rendering possible a greatly increased output. At this new works the most up-to-date, practical and ingenious modern machinery is employed in every department. The works is conveniently situated between canal and railway, and having its own wharf and sidings, it is laid out on the modern flow system. The crude materials from which Wakefield lubricants are manufactured enter from the canal on the north, and the manufactured product leaves by road and rail from the south.

As the fame of Wakefield products grew, it became necessary to promote an associated company in France, and to establish branches of the English Company Al over the world, as detailed below.

Sir Charles Wakefield, Bart., C.B.E., founder and Governing Director of C. C. Wakefield and Co., Ltd., was born in Liverpool, but has long been associated with the City of London, became a member of the City Corporation in 1904, and served in the office of Sheriff during t907 and 1908, and was knighted in the latter year. He was elected Lord Mayor in 1915, and on leaving office created Baronet, and subsequently a C.B.E. (Military Division).