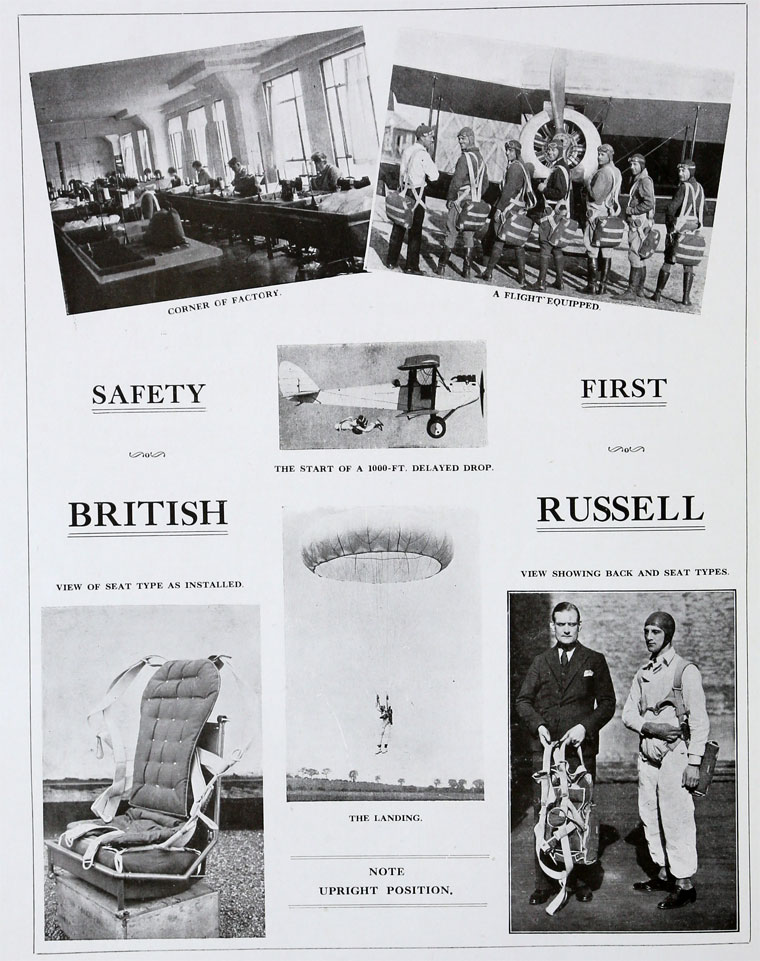 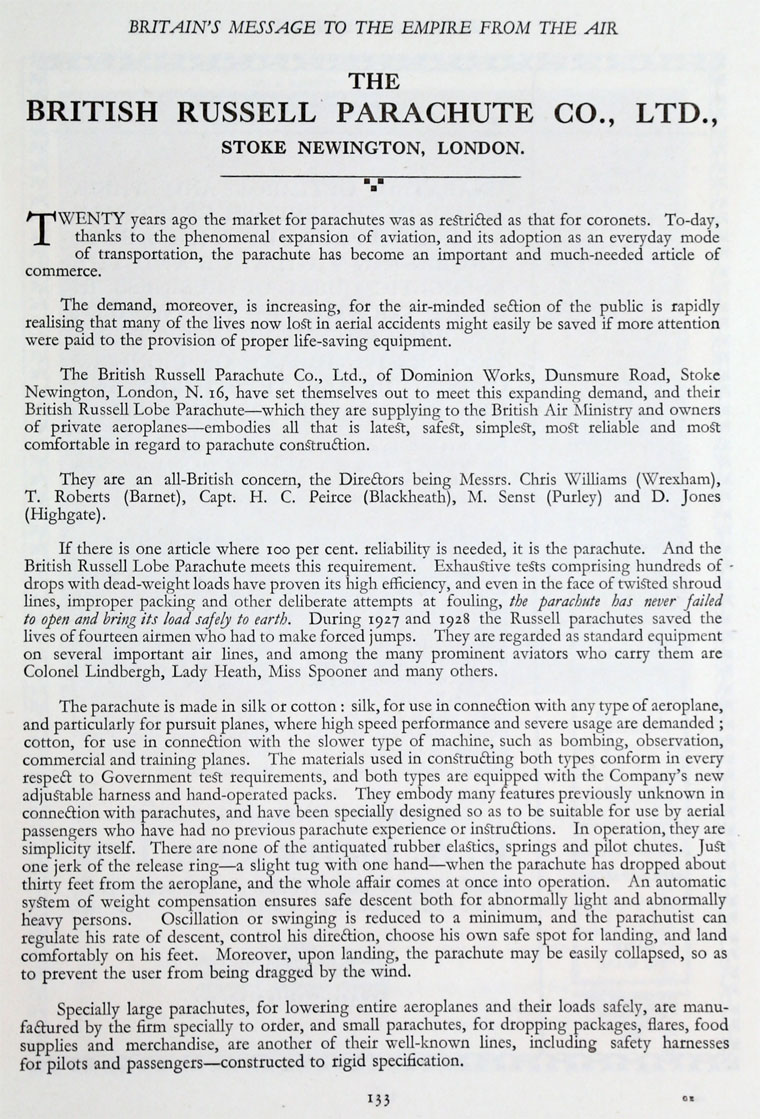 TWENTY years ago the market for parachutes was as restricted as that for coronets. To-day, thanks to the phenomenal expansion of aviation, and its adoption as an everyday mode of transportation, the parachute has become an important and much-needed article of commerce.

The demand, moreover, is increasing, for the air-minded section of the public is rapidly realising that many of the lives now lost in aerial accidents might easily be saved if more attention were paid to the provision of proper life-saving equipment.

The British Russell Parachute Co., Ltd., of Dominion Works, Dunsmure Road, Stoke Newington, London, N.16, have set themselves out to meet this expanding demand, and their British Russell Lobe Parachute - which they are supplying to the British Air Ministry and owners of private aeroplanes - embodies all that is latest, safest, simplest, most reliable and most comfortable in regard to parachute construction.

If there is one article where too per cent. reliability is needed, it is the parachute. And the British Russell Lobe Parachute meets this requirement. Exhaustive tests comprising hundreds of drops with dead-weight loads have proven its high efficiency, and even in the face of twisted shroud lines, improper packing and other deliberate attempts at fouling, the parachute bas never failed to open and bring its load safely to earth. During 1927 and 1928 the Russell parachutes saved the lives of fourteen airmen who had to make forced jumps. They are regarded as standard equipment on several important air lines, and among the many prominent aviators who carry them are Colonel Lindbergh, Lady Heath, Miss Spooner and many others.

The parachute is made in silk or cotton: silk, for use in connection with any type of aeroplane, and particularly for pursuit planes, where high speed performance and severe usage are demanded cotton, for use in connection with the slower type of machine, such as bombing, observation, commercial and training planes. The materials used in construing both types conform in every respect to Government test requirements, and both types are equipped with the Company's new adjustable harness and hand-operated packs. They embody many features previously unknown in connection with parachutes, and have been specially designed so as to be suitable for use by aerial passengers who have had no previous parachute experience or instructions. In operation, they are simplicity itself. There are none of the antiquated rubber elastics, springs and pilot chutes. Just one jerk of the release ring - a slight tug with one hand - when the parachute has dropped about thirty feet from the aeroplane, and the whole affair comes at once into operation. An automatic system of weight compensation ensures safe descent both for abnormally light and abnormally heavy persons. Oscillation or swinging is reduced to a minimum, and the parachutist can regulate his rate of descent, control his direction, choose Isis own safe spot for landing, and land comfortably on his feet. Moreover, upon landing, the parachute may be easily collapsed, so as to prevent the user from being dragged by the wind.

Specially large parachutes, for lowering entire aeroplanes and their loads safely, are manufactured by the firm specially to order, and small parachutes, for dropping packages, flares, food supplies and merchandise, are another of their well-known lines, including safety harnesses for pilots and passengers - constructed to rigid specification.