Grace's Guide is the leading source of historical information on industry and manufacturing in Britain. This web publication contains 149,991 pages of information and 235,419 images on early companies, their products and the people who designed and built them. 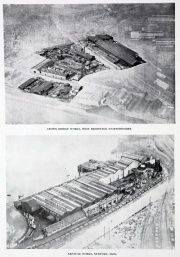 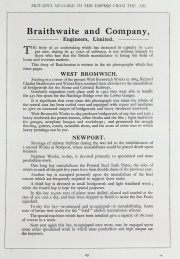 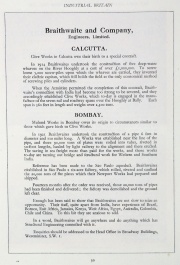 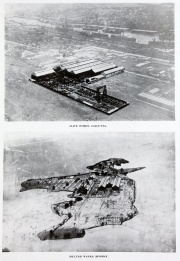 The story of an undertaking which has increased is capacity by 1,200 per cent during its 41 years of existence, is not without interest to those who fear that the British manufacturer is losing his hold of home and overseas markets.

This Story of Braithwaites is written in the air-photographs which face these pages.

Starting in a corner of the present West Bromwich Works in 1884, Richard Charles Braithwaite and Walter Kirk confined their activities to the manufacture of bridgework for the Home and Colonial Railways.

Gradually expansion took place until in 1912 they were able to handle the 345 feet spans for the Hardinge Bridge over the Lower Ganges.

It is significant that even since this photograph was taken the whole of the central area has been roofed over and equipped with cranes and machines to give an increased output of bridgework and heavy Structural Steelwork.

West Bromwich Works to-day produces bridgework of any size and type; heavy Steelwork for power-houses, office blocks and the like; light Steelwork for garages, aeroplane hangars and workshops; and presswork for trough flooring, gutters, canals, monolith shoes, and the score of other uses to which heavy pressings can be put.

Shortage of railway facilities during the war led to the establishment of a second Works at Newport, where manufactures could be placed direct upon Steamers.

One long bay manufactures the Pressed Steel Tank Plates, the sales of which in each of the past five years have been double those of the previous year.

Another bay is occupied primarily upon the manufacture of the Steel towers which are frequently required to support these tanks.

A third bay is devoted to small bridgework and light Structural work; while the fourth bay is kept for special purposes.

In this bay 20,000 tons of plates were drilled, planed and scarfed at the rate of 100 tons a day, and these were shipped to Brazil to make the Sao Paulo aqueduct.

To-day this bay - re-arranged and re-equipped - is manufacturing 6,000 tons of lattice Steel masts for the "Grid" electric transmission scheme.

The special machines which have been installed give a capacity of 185 tons of towers in a week.

Next year again this bay, re-equipped once more, may be engaged upon some other specialised work in which mass production and high output are the keynotes.

Clive Works in Calcutta owe their birth to a special contract.

In 1914 Braithwaites undertook the construction of five deep-water wharves on the River Hooghly at a cost of over £1,000,000. To screw home 5,000 screw-piles upon which the wharves are carried, they invented their electric capstan, which still holds the field as the only economical method of screwing piles and cylinders.

When the Armistice permitted the completion of this contract, Braithwaite's connection with India had become too strong to be severed, and they accordingly established Clive Works, which to-day is engaged in the manufacture of the seven rail and roadway spans over the Hooghly at Bally. Each span is 360 feet in length and weighs over 2,300 tons.

Mulund Works in Bombay owes its origin to circumstances similar to those which gave birth to Clive Works.

In 1921 Braithwaites undertook the construction of a pipe 6 feet in diameter and 110 miles long. A Works was established near the line of the pipe, and there 90,000 tons of plates were rolled into tubes, riveted in 50-foot lengths, hauled by light railway to the alignment and there erected. The saving in sea freight more than paid for the works, and those works to-day are turning out bridge and Structural work for Western and Southern India.

Reference has been made to the Sao Paulo aqueduct. Braithwaites established in Sao Paulo a six-acre factory, which rolled, riveted and caulked the 20,000 tons of flat plates which their Newport Works had prepared and shipped.

Fourteen months after the order was received, those 20,000 tons of pipes had been finished and delivered; the factory was demolished and the ground left clear.

Enough has been said to show that Braithwaites are not slow to seize an opportunity. Their Staff, quite apart from India, have experience of Brazil, Borneo, East Africa, Jamaica, Kenya, West Africa, Egypt, Australia, Colombia, Chile and China. To this lilt they are anxious to add.

In a word, Braithwaites will go anywhere and do anything which has Structural Engineering conflated with it.

Enquiries should be addressed to the Head Office in Broadway Buildings, Westminster, S.W.1.