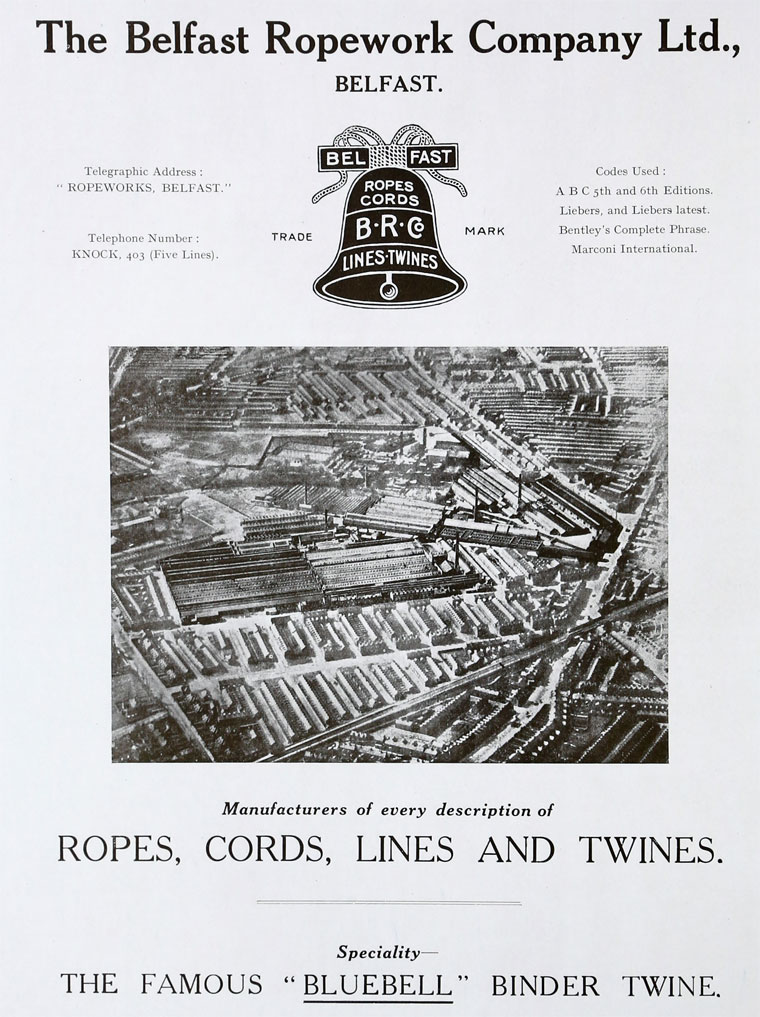 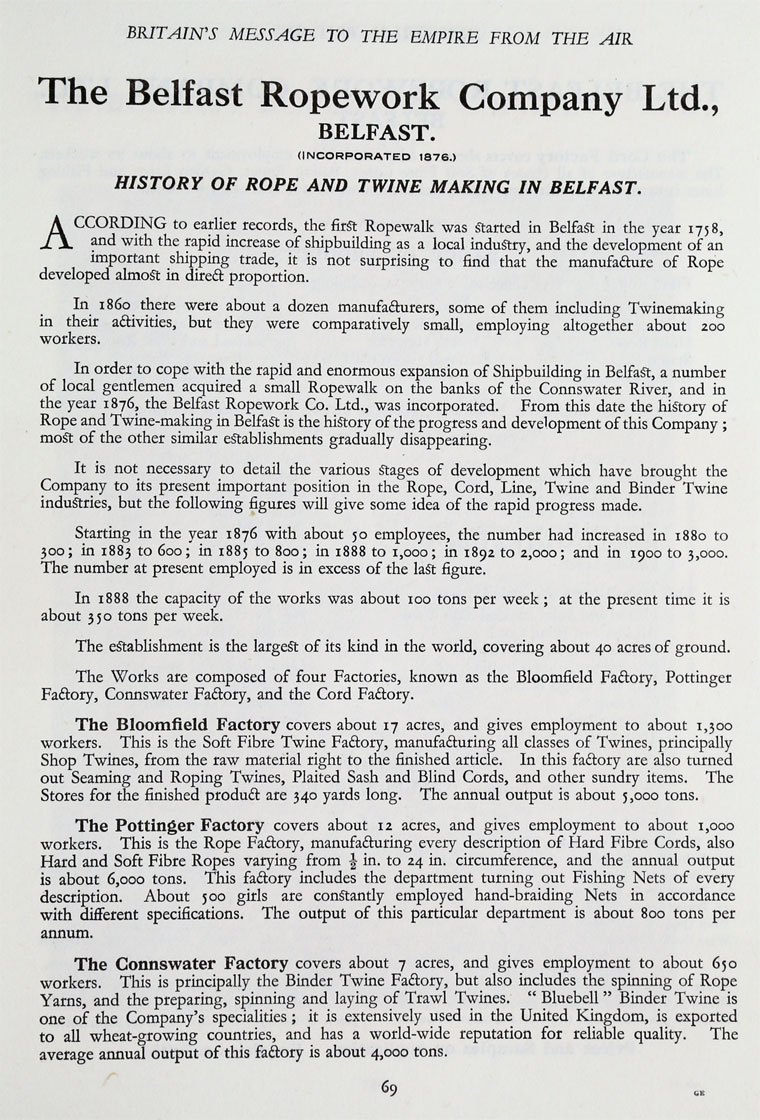 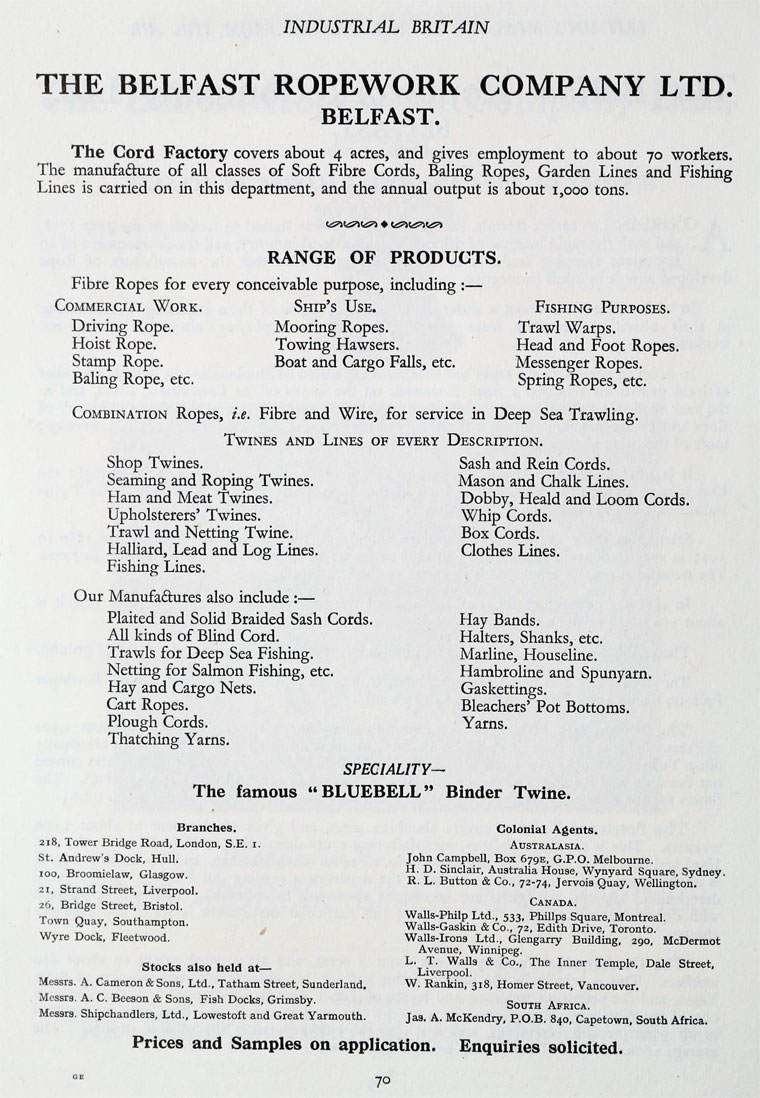 According to earlier records, the first Ropewalk was started in Belfast in the year i758, and with the rapid increase of shipbuilding as a local industry, and the development of an important shipping trade, it is not surprising to find that the manufacture of Rope developed almost in direct proportion.

In 1860 there were about a dozen manufacturers, some of them including Twinemaking in their activities, but they were comparatively small, employing altogether about 200 workers.

In order to cope with the rapid and enormous expansion of Shipbuilding in Belfast, a number of local gentlemen acquired a small Ropewalk on the banks of the Connswater River, and in the year 1876, the Belfast Ropework Co. Ltd., was incorporated. From this date the history of Rope and Twine-making in Belfast is the history of the progress and development of this Company; most of the other similar establishments gradually disappearing.

It is not necessary to detail the various stages of development which have brought the Company to its present important position in the Rope, Cord, Line, Twine and Binder 'Twine industries, but the following figures will give some idea of the rapid progress made.

The establishment is the largest of its kind in the world, covering about 4o acres of ground.

The Works arc composed of four Factories, known as the Bloomfield Factory, Pottinger Factory, Connswater Factory, and the Cord Factory.

The Bloomfield Factory covers about 17 acres, and gives employment to about 1,300 workers. This is the Soft Fibre Twine Factory, manufacturing all classes of Twines, principally Shop Twines, from the raw material right to the finished article. In this factory arc also turned out Seaming and Roping Twines, Plaited Sash and Blind Cords, and other sundry items. The Stores for the finished product arc 340 yards long. The annual output is about 5,000 tons.

The Pottinger Factory covers about 12 acres, and gives employment to about 1,000 workers. This is the Rope Factory, manufacturing every description of Hard Fibre Cords, also Hard and Soft Fibre Ropes varying from 1/2 in. to 24 in. circumference, and the annual output is about 6,000 tons. This factory includes the department turning out Fishing Nets of every description. About 500 girls are constantly employed hand-braiding Nets in accordance with different specifications. The output of this particular department is about 800 tons per annum.

The Connswater Factory covers about 7 acres, and gives employment to about 650 workers. This is principally the Binder Twine Factory, but also includes the spinning of Rope Yarns, and the preparing, spinning and laying of Trawl Twines. "Bluebell" Binder Twine is one of the Company's specialities; it is extensively used in the United Kingdom, is exported to all wheat-growing countries, and has a world-wide reputation for reliable quality. The average annual output of this factory is about 4,000 tons.

The Cord Factory covers about 4 acres, and gives employment to about 70 workers. The manufacture of all classes of Soft Fibre Cords, Baling Ropes, Garden Lines and Fishing Lines is carried on in this department, and the annual output is about 1,000 tons.