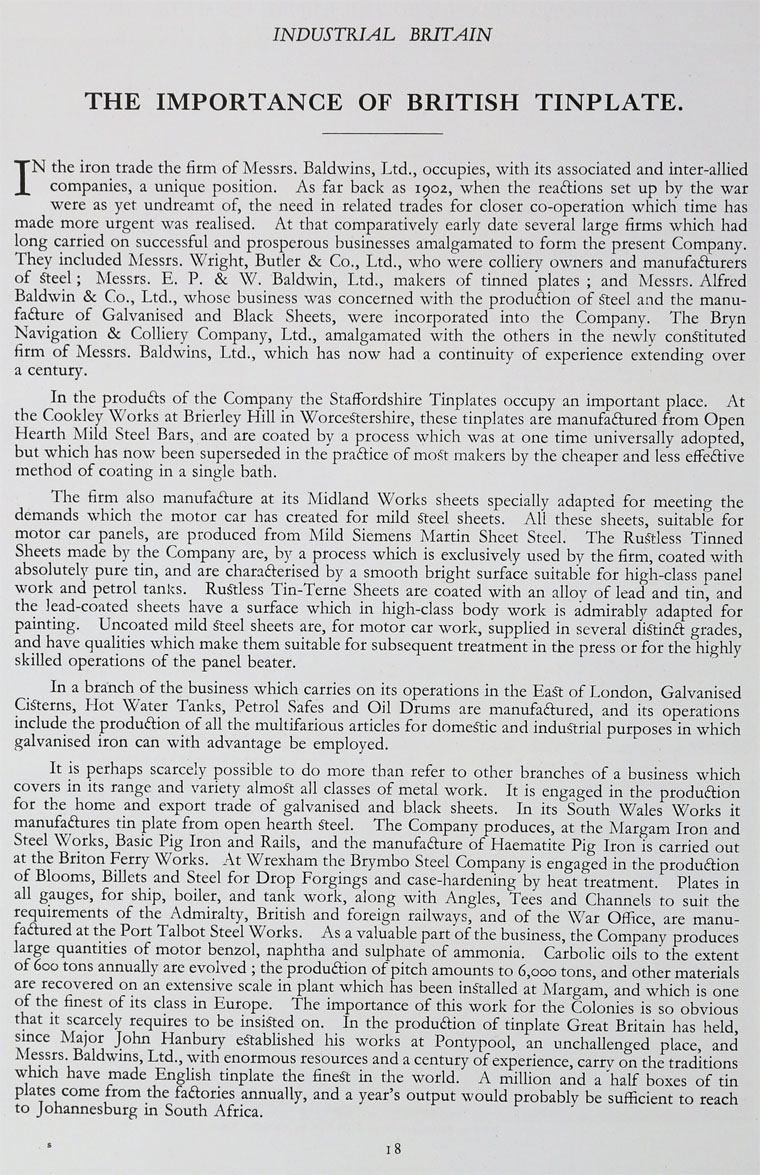 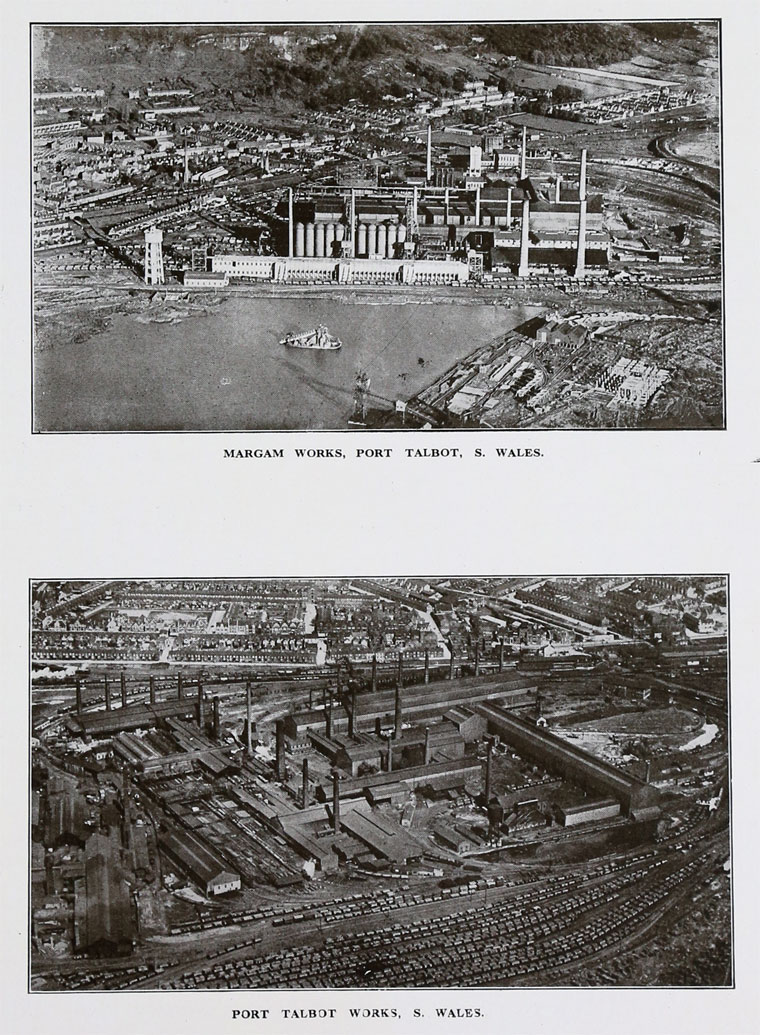 IN the iron trade the firm of Messrs. Baldwins, Ltd., occupies, with its associated and inter-allied companies, a unique position. As far back as 1902, when the reactions set up by the war were as yet undreamt of, the need in related trades for closer co-operation which time has made more urgent was realised. At that comparatively early date several large firms which had long carried on successful and prosperous businesses amalgamated to form the present Company. They included Messrs. Wright, Butler and Co., Ltd., who were colliery owners and manufacturers of steel; Messrs. E. P. and W. Baldwin, Ltd., makers of tinned plates; and Messrs. Alfred Baldwin and Co., Ltd., whose business was concerned with the production of steel and the manufacture of Galvanised and Black Sheets, were incorporated into the Company. The Bryn Navigation and Colliery Company, Ltd., amalgamated with the others in the newly constituted firm of Messrs. Baldwins, Ltd., which has now had a continuity of experience extending over a century.

In the products of the Company the Staffordshire Tinplates occupy an important place. At the Cookley Works at Brierley Hill in Worcestershire, these tinplates are manufactured from Open Hearth Mild Steel Bars, and are coated by a process which was at one time universally adopted, but which has now been superseded in the practice of most makers by the cheaper and less effective method of coating in a single bath.

The firm also manufacture at its Midland Works sheets specially adapted for meeting the demands which the motor car has created for mild keel sheets. All these sheets, suitable for motor car panels, are produced from Mild Siemens Martin Sheet Steel. The Rustless Tinned Sheets made by the Company are, by a process which is exclusively used by the firm, coated with absolutely pure tin, and are characterised by a smooth bright surface suitable for high-class panel work and petrol tanks. Rustless Tin-Terne Sheets are coated with an alloy of lead and tin, and the lead-coated sheets have a surface which in high-class body work is admirably adapted for painting. Uncoated mild keel sheets arc, for motor car work, supplied in several distinct grades, and have qualities which make them suitable for subsequent treatment in the press or for the highly skilled operations of the panel beater.

In a branch of the business which carries on its operations in the East of London, Galvanised Cisterns, Hot Water Tanks, Petrol Safes and Oil Drums are manufactured, and its operations include the production of all the multifarious articles for domestic and industrial purposes in which galvanised iron can with advantage be employed.

It is perhaps scarcely possible to do more than refer to other branches of a business which covers in its range and variety almost all classes of metal work. It is engaged in the production for the home and export trade of galvanised and black sheets. In its South Wales Works it manufactures tin plate from open hearth steel. The Company produces, at the Margam Iron and Steel Works, Basic Pig Iron and Rails, and the manufacture of Haematite Pig Iron is carried out at the Briton Ferry Works.

At Wrexham the Brymbo Steel Company is engaged in the production of Blooms, Billets and Steel for Drop Forgings and case-hardening by heat treatment. Plates in all gauges, for ship, boiler, and tank work, along with Angles, Tees and Channels to suit the requirements of the Admiralty, British anti foreign railways, and of the War Office, are manufactured at the Port Talbot Steel Works.

As a valuable part of the business, the Company produces large quantities of motor benzol, naphtha and sulphate of ammonia. Carbolic oils to the extent of Coo tons annually are evolved; the production of pitch amounts to 6,000 tons, and other materials are recovered on an extensive scale in plant which has been installed at Margam, and which is one of the finest of its class in Europe. The importance of this work for the Colonies is so obvious that it scarcely requires to be insisted on.

In the production of tinplate Great Britain has held, since Major John Hanbury established his works at Pontypool, an unchallenged place, and Messrs. Baldwins, Ltd., with enormous resources and a century of experience, carry on the traditions which have made English tinplate the finest in the world. A million and a half boxes of tin plates come from the factories annually, and a year's output would probably be sufficient to reach to Johannesburg in South Africa.