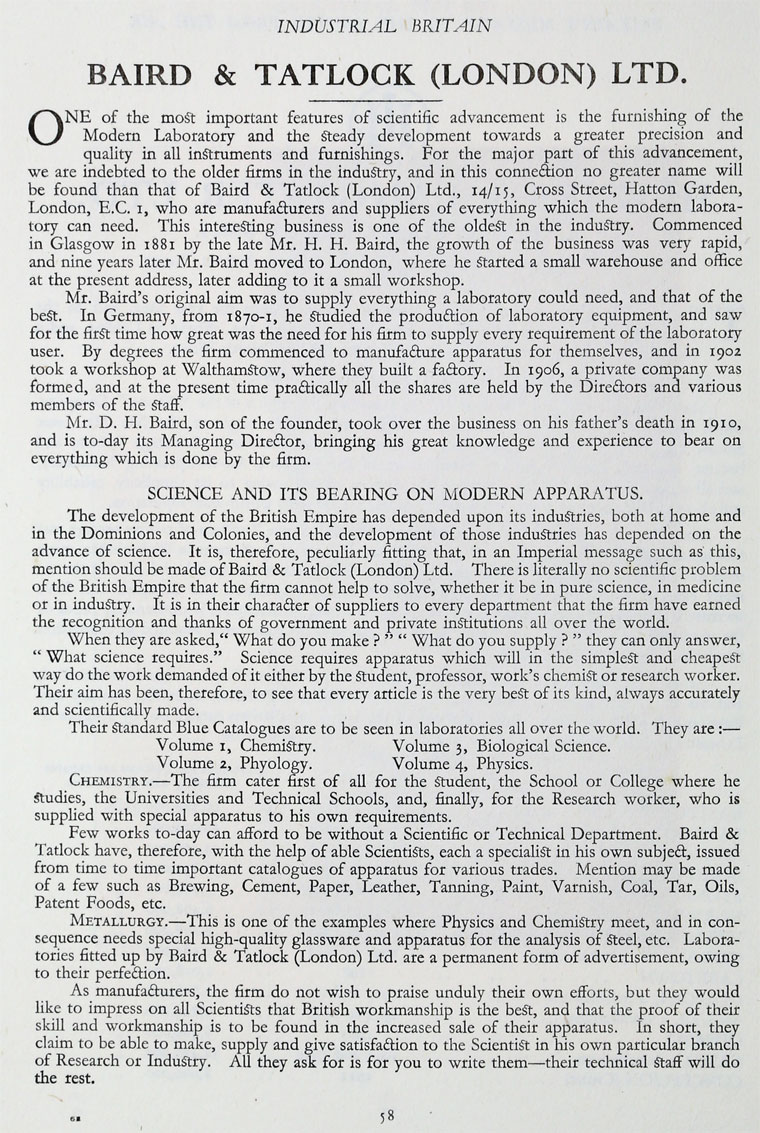 One of the most important features of scientific advancement is the furnishing of the Modern Laboratory and the Steady development towards a greater precision and quality in all instruments and furnishings. For the major part of this advancement, we are indebted to the older firms in the industry, and in this connection no greater name will be found than that of Baird and Tatlock (London) Ltd., 14/15, Cross Street, Hatton Garden, London, E.C.1, who are manufacturers and suppliers of everything which the modern laboratory can need. This interesting business is one of the oldest in the industry. Commenced in Glasgow in 1881 by the late Mr. H. H. Baird, the growth of the business was very rapid, and nine years later Mr. Baird moved to London, where he started a small warehouse and office at the present address, later adding to it a small workshop.

Mr. Baird's original aim was to supply everything a laboratory could need, and that of the best. In Germany, from 1870-1, he studied the production of laboratory equipment, and saw for the first time how great was the need for his firm to supply every requirement of the laboratory user. By degrees the firm commenced to manufacture apparatus for themselves, and in 1902 took a workshop at Walthamstow, where they built a factory. In 1906, a private company was formed, and at the present time practically all the shares are held by the Directors and various members of the Staff.

Mr. D. H. Baird, son of the founder, took over the business on his father's death in 1910, and is to-day its Managing Director, bringing his great knowledge and experience to bear on everything which is done by the firm.

SCIENCE AND ITS BEARING ON MODERN APPARATUS.

The development of the British Empire has depended upon its industries, both at home and in the Dominions .d Colonies, and the development of those incl.-tries has depended on the advance of science. It is, therefore, peculiarly fitting that, in an Imperial message such as this, mention should be made of Baird and Tatlock (London) Ltd. There is literally no scientific problem of the British Empire that the firm cannot help to solve, whether it be in pure science, in medicine or in industry. It is in their character of suppliers to every department that the firm have earned the recognition and thanks of government and private institutions all over the world.

When they are asked, "What do you make?" "What do you supply?" they can only answer, "What science requires." Science requires apparatus which will in the simplest and cheapest way do the work demanded of it either by the Student, professor, work's chemist or research worker. Their aim has been, therefore, to see that every article is the very best of its kind, always accurately and scientifically made.

Their Standard Blue Catalogues are to be seen in laboratories all over the world. They are: -

CHEMISTRY.-The firm cater first of all for the Student, the School or College where he Studies, the Universities and Technical Schools, and, finally, for the Research worker, who is supplied with special apparatus to his own requirements.

Few works to-day can afford to be without a Scientific or Technical Department. Baird and Tatlock have, therefore, with the help of able Scientists, each a specialist in his own subject, issued from time to time important catalogues of apparatus for various trades. Mention may be made of a few such as Brewing, Cement, Paper, Leather, Tanning, Paint, Varnish, Coal, Tar, Oils, Patent Foods, etc.

METALLURGY.-This is one of the examples where Physics and Chemistry meet, and in con- sequence needs special high-quality glassware and apparatus for the analysis of Steel, etc. Laboratories fitted up by Baird and Tatlock (London) Ltd. are a permanent form of advertisement, owing to their perfection.

As manufacturers, the firm do not wish to praise unduly their own efforts, but they would like to impress on all Scientists that British workmanship is the best, and that the proof of their skill and workmanship is to be found in the increased sale of their apparatus. In short, they claim to be able to make, supply and give satisfaction to the Scientist in his own particular branch of Research or Ind.-try. All they ask for is for you to write them - their technical Staff will do the rest.