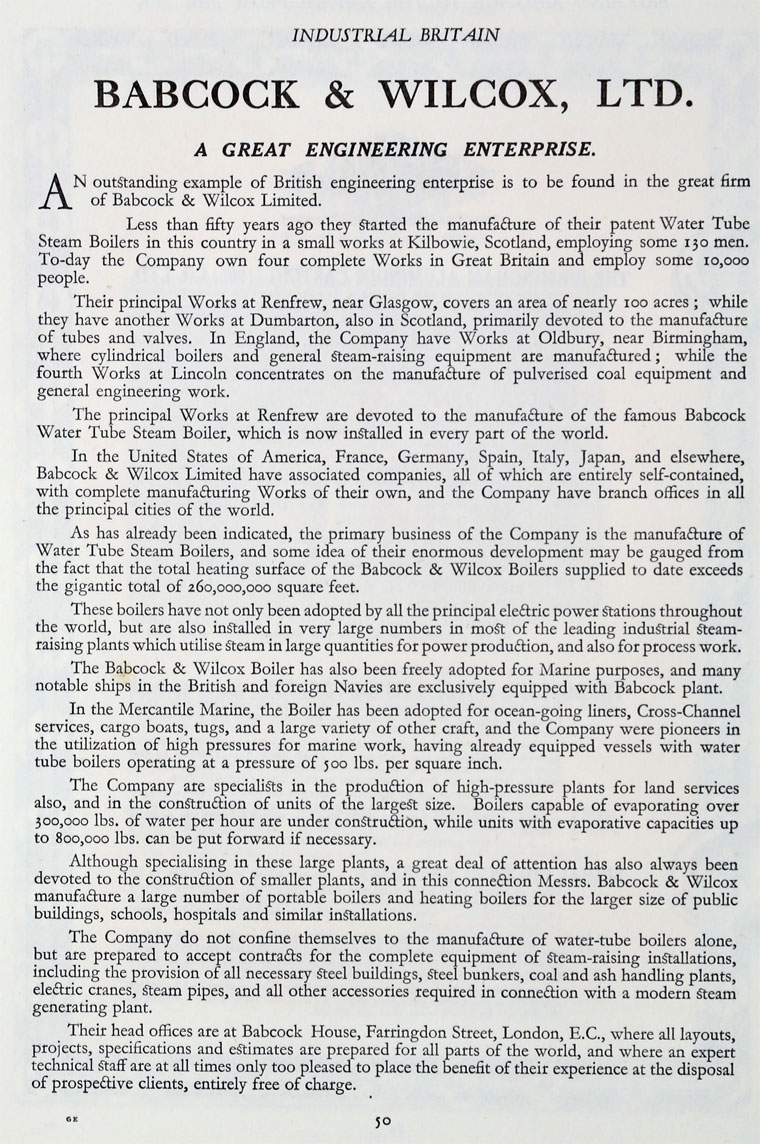 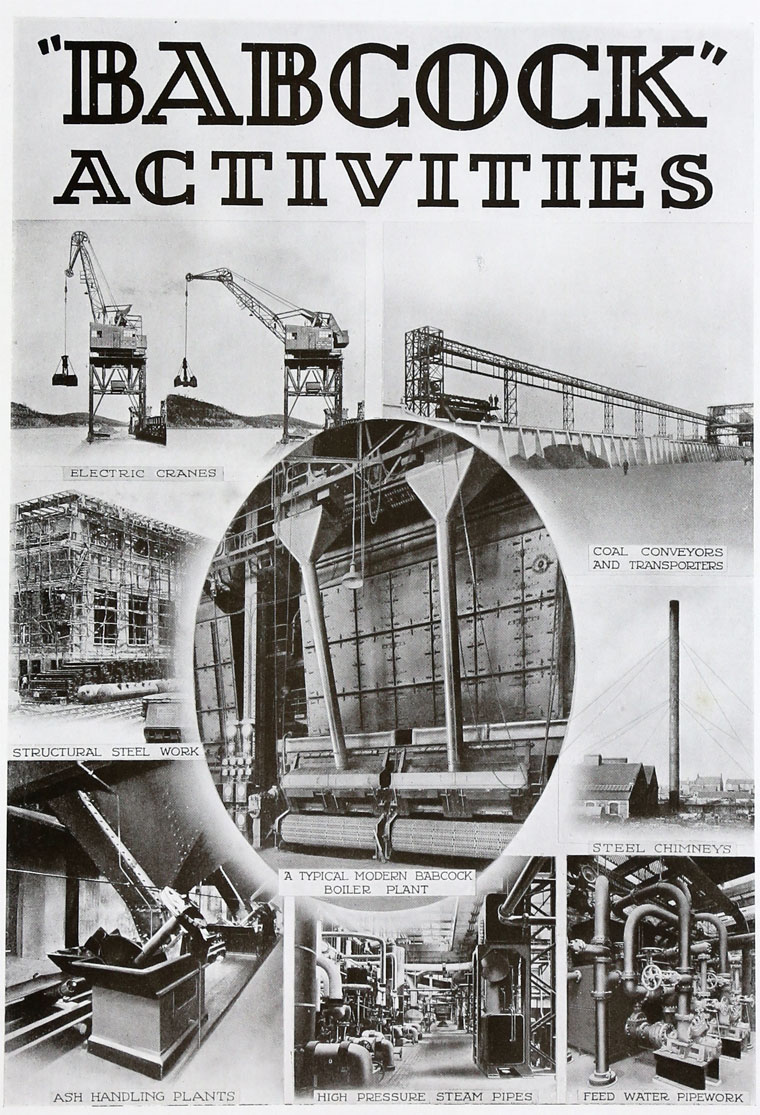 Less than fifty years ago they started the manufacture of their patent Water Tube Steam Boilers in this country in a small works at Kilbowie, Scotland, employing some 130 men. To-day the Company own four complete Works in Great Britain and employ some 10,000 people.

Their principal Works at Renfrew, near Glasgow, covers an area of nearly too acres; while they have another Works at Dumbarton, also in Scotland, primarily devoted to the manufacture of tubes and valves. In England, the Company have Works at Oldbury, near Birmingham, where cylindrical boilers and general steam-raising equipment arc manufactured; while the fourth Works at Lincoln concentrates on the manufacture of pulverised coal equipment and general engineering work.

The principal Works at Renfrew are devoted to the manufacture of the famous Babcock Water Tube Steam Boiler, which is now installed in every part of the world.

In the United States of America, France, Germany, Spain, Italy, Japan, and elsewhere, Babcock and Wilcox Limited have associated companies, all of which are entirely self-contained, with complete manufacturing Works of their own, and the Company have branch offices in all the principal cities of the world.

As has already been indicated, the primary business of the Company is the manufacture of Water Tube Steam Boilers, and some idea of their enormous development may be gauged from the fact that the total heating surface of the Babcock and Wilcox Boilers supplied to date exceeds the gigantic total of 260,000,000 square feet.

These boilers have not only been adopted by all the principal electric power stations throughout the world, but arc also installed in very large numbers in moot of the leading industrial steam-raising plants which utilise Steam in large quantities for power production, and also for process work.

The Babcock and Wilcox Boiler has also been freely adopted for Marine purposes, and many notable ships in the British and foreign Navies are exclusively equipped with Babcock plant.

In the Mercantile Marine, the Boiler has been adopted for ocean-going liners, Cross-Channel services, cargo boats, tugs, and a large variety of other craft, and the Company were pioneers in the utilization of high pressures for marine work, having already equipped vessels with water tube boilers operating at a pressure of too lbs. per square inch.

The Company arc specialists in the production of high-pressure plants for land services also, and in the construction of units of the largest size. Boilers capable of evaporating over 300,000 lbs. of water per hour are under construction, while units with evaporative capacities up to 800,000 lbs. can be put forward if necessary.

Although specialising in these large plants, a great deal of attention has also always been devoted to the construction of smaller plants, and in this connection Messrs. Babcock and Wilcox manufacture a large number of portable boilers and heating boilers for the larger size of public buildings, schools, hospitals and similar installations.

The Company do not confine themselves to the manufacture of water-tube boilers alone, but arc prepared to accept contras for the complete equipment of Steam-raising installations, including the provision of all necessary Steel buildings, steel bunkers, coal and ash handling plants, electric cranes, gleam pipes, and all other accessories required in connection with a modern Steam generating plant.

Their head offices arc at Babcock House, Farringdon Street, London, E.C., where all layouts, projects, specifications and estimates are prepared for all parts of the world, and where an expert technical Staff arc at all times only too pleased to place the benefit of their experience at the disposal of prospective clients, entirely free of charge.