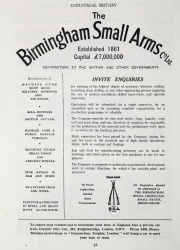 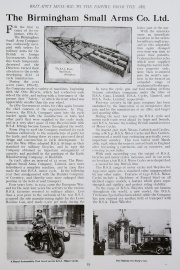 The Company controls its own steel works, forge, foundry, strip mill and press shop, and can, therefore, if required, be responsible for the production of the material and the preliminary work upon it, as well as for the finishing processes.

Much experience has been gained by the Company during the past few years in the practical use of high tensile aluminium alloys, both as castings and forgings.

Jigs and tools for manufacturing processes can be made to drawings, and advice given on the best machines to use for any purpose.

The Company is prepared to undertake experimental development work in certain directions for which it has suitable plant and personnel.

For the first 19 years of its existence, 1861-80, The Birmingham Small Arms Company was exclusively occupied with military arms for the British or foreign Governments. In 1880 this trade temporarily decreased and the Directors turned their attention to the newly developing field of cycle manufacture.

During the next seven years, 1880-87, the Company made a variety of machines beginning with the Otto Bicycle, which had a wheel one each side of the rider, and ending with the forerunner of the present date "Safety" in which the front wheel was appreciably smaller than the rear wheel.

In 1887 Government orders for rifles again became the chief concern of the organisation. In 1893, however, the B.S.A. Company came in to the cycle market again with the manufacture of hubs and other parts that were supplied to the cycle trade, and in a very short space of time Bicycles built with B.S.A. fittings became famous throughout the world..........

In 1908, after an interval of 21 years, The Birmingham Small Arms Company, Limited, once more introduced a complete machine and in 1909 they made the first B.S.A. motorcycle. In the following year they amalgamated with the Daimler Company, of Coventry, and thereby once more enlarged their position in the field of road transport.