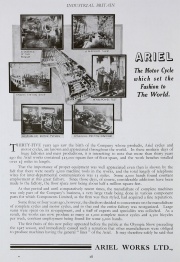 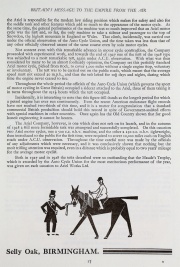 Thirty-five years ago saw the birth of the Company whose products, Ariel cycles and motor cycles, are known and appreciated throughout the world. In these modem days of huge factories and mass productions, it is interesting to now that more than thirty years ago the Ariel works contained 325,000 square feet of floor space, and the work benches totalled over 2.5 miles in length.

That the importance of proper equipment was well appreciated even then is shown by the fact that there were nearly 3,000 machine tools in the works, and the total length of telephone wires for inter-departmental communication was 13 miles. Some 2,000 hands found constant employment at this great factory. Since those days, of course, considerable additions have been made to the factory, the floor space now being about half a million square feet.

At that period and until comparatively recent dams, the manufacture of complete machines was only part of the Company's business, a very large trade being done in various component pats for which Components Limited, as the firm was then styled, had acquired a fine reputation.

Some three or four years ago, however, the directors decided to concentrate on the manufacture of complete cycles and motor cycles, and to that end the entire factory was reorganized. Large sums were spent on its re-equipment, and a staff of experts and specialists was collected. As a result, the works can now produce as many as 1,000 complete motor cycles and 2,500 bicycles per week, constant employment being found for some 3,000 hands.

The fists fruits of this new policy appeared before the public at the Olympia Show proceeding the 1927 season, and immediately caused such a sensation that other manufacturers were obliged to produce machines having the general "lines" of the Ariel. It may therefore safely be said that the Ariel is responsible for the modern low riding position which makes for safety and also for the saddle tank and other features which add so much to the appearance of the motor cycle. At the same time, the general performance of the machine was so much improved that an Ariel motor cycle was the first and, so far, the only machine to take a sidecar and passenger to the top of Snowdon, the highest mountain in England or Wales. That climb, incidentally, was carried out under the official observation of the Auto Cycle Union, and the time taken was less than that of any other officially observed ascent of the same course even by solo motor cycles.

Not content even with this remarkable advance in motor cycle construction, the Company proceeded with experimental work, and towards the end of 1927 one of the first of the 1928 type was subjected to a most remarkable test, again under A.C.U. observation. With what was then considered by many to be an almost foolhardy optimism, the Company set this perfectly Standard Ariel motor cycle, picked from stock, to cover 5,500 miles without a single engine stop, voluntary or involuntary. The test was to be carried out on the public roads, which meant that the average speed must not exceed 20 m.p.h., and thus the test lasted for 10.5 days and nights, during which time the engine never ceased to fire.

Throughout the whole period the officials of the Auto Cycle Union (which governs the sport of motor cycling in Great Britain) occupied a sidecar attached to the Ariel, three of them taking it in turns throughout the 25 hours which the test occupied.

Incidentally, it is interesting to note that this figure still stands as the longest period for which a petrol engine has ever run continuously. Even the recent American endurance flight records have not reached two-thirds of this time, and it is it matter for congratulation that a Standard commercial British production should hold this record in spite of Government-assisted efforts with special machines in other countries. Once again has the Old Country shown that for good honest engineering it cannot be beaten.

The Ariel Company, however, is one which does not rest on its laurels, and in the autumn of 1928 it still more formidable task was attempted and successfully completed. On this occasion two Ariel motor cycles, one it 500 c.c. o.h.v. machine, and the other a 250 c.c. o.h.v. lightweight, then introduced to the public for the first time, were required to cover 10,000 miles each on English roads under A.C.U. observation. 'Throughout the time careful note was made by the officials of any adjustments which were necessary, and it was conclusively shown that nothing but the most trifling attention was required, even in a distance which is probably equal to two years' mileage for the average motor cyclist.

Both in 1927 and in 1928 the tests described were its outstanding that the Maude's Trophy, which is awarded by the Auto Cycle Union for the most meritorious performance of the year, was given on each occasion to Ariel Works Ltd.