Grace's Guide is the leading source of historical information on industry and manufacturing in Britain. This web publication contains 149,702 pages of information and 235,430 images on early companies, their products and the people who designed and built them. 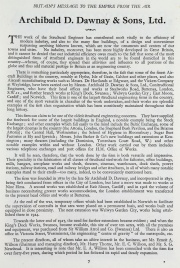 THE work of the Structural Engineer has contributed most vitally to the efficiency of modern industry, and also to the many fine buildings, of a design and convenience surpassing anything hitherto known, which are now the ornaments and centres of our towns and cities. No industry, moreover, has been more highly developed in Great Britain, and it cannot be denied that our industrial efficiency owes much to the fall that some of the most distinguished firms of Structural engineers in the world are to be found domiciled in this country - whence, of course, they spread their activities and influence to all portions of the globe and thus add material prestige to Britain as an engineering country.

There is something particularly appropriate, therefore, in the fact that some of the finest Aircraft Buildings in the country, notably at Hythe, Isle of Grain, Calshot and other places, and also Aircraft manufacturing works such as Messrs. De Havilands at Edgware, and the Vickers Company at Weybridge, have been carried out by Messrs. Archibald D. Dawnay and Sons, Ltd., Constructional Engineers, who have their head offices and works at Steelworks Road, Battersea, London, S.W.1., and further branch works at King's Dock, Swansea; Welwyn Garden City; East Moors, Cardiff; and Norwich. This firm is one of the largest Structural engineering firms in the country, and one of the most versatile in character of the work undertaken, and their works are splendid examples of the first class organisation which has been consistently maintained throughout their long history.

This firm can claim to be one of the oldest Structural engineering concerns. They have supplied the Steelwork for some of the largest buildings in England, a notable example being the Stock Exchange; and other examples which fall easily to the mind include the Baltic Exchange, some of the largest cinemas in the country, (the Astoria, London, the Shepherd Bush Pavilion, and the Brixton Astoria); the Central Hall, Westminster; the School of Hygiene in Bloomsbury; Sugar Beet Factories at Ely and Ipswich; Messrs. John Barker and Co's new buildings and extensions at Kensington; many theatres (including the Dominion, Tottenham Court Road, W.) and other notable examples within and without London. Other work carried out by them includes various telephone exchanges and post offices for H.M. Office of Works.

It will be seen therefore, that the work done by the firm is both versatile and impressive. Their speciality is the fabrication of all classes of Structural steelwork for factories, office buildings, mills, hangars, aeroplane works and sheds, theatres, cinemas, warehouses, dock sheds, power Stations, railway Stations, road and railway bridges and other Structures, in all of which many notable examples Stand to their credit - too many, indeed, to be conveniently mentioned here.

The firm was founded in 1870 by the late Sir Archibald D. Dawnay, and incorporated in 1897, being first conducted from offices in the City of London, but later a move was made to works Nine Elms. A second works was established at East Moors, Cardiff; and in 1908 the volume of business necessitating greater works accommodation, the London establishment was transferred to the present head offices and works at Battersea.

At the end of the war, temporary offices which had been established in Norwich to facilitate the supervision of contracts in that area were placed on a permanent basis, and works built and equipped in close proximity. The next extension was Welwyn Garden City, works being established there H 1924.

Towards the latter end of 1927, the need for further extensions became evident; and when the King's Dock Works, Swansea, became available, this site of over ten acres, with all the premises and equipment, was purchased from Sir William Arrol and Co. (Swansea) Ltd. There is also an office in Victoria Street, Westminster, the engineering "centre of gravity" of the metropolis, etc.

The present directors, all of whom take an active interest in the business, are Mr. Ernest A. Willson (chairman and managing director), Mr. Harry Thorne, Mr. E. C. Willson, and Mr. S. G. Newstead. It is interesting to note that Mr. E. A. Willson has been connected with the firm for over forty-five years, during which period he has fostered its rapid and steady expansion.