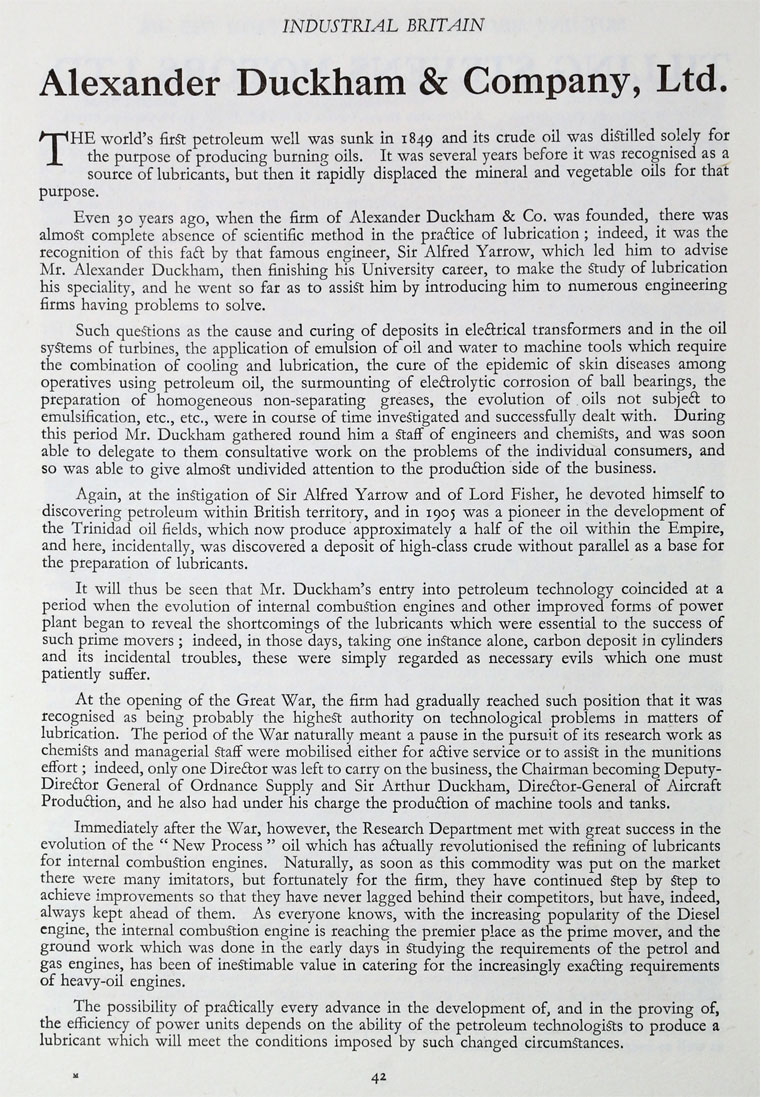 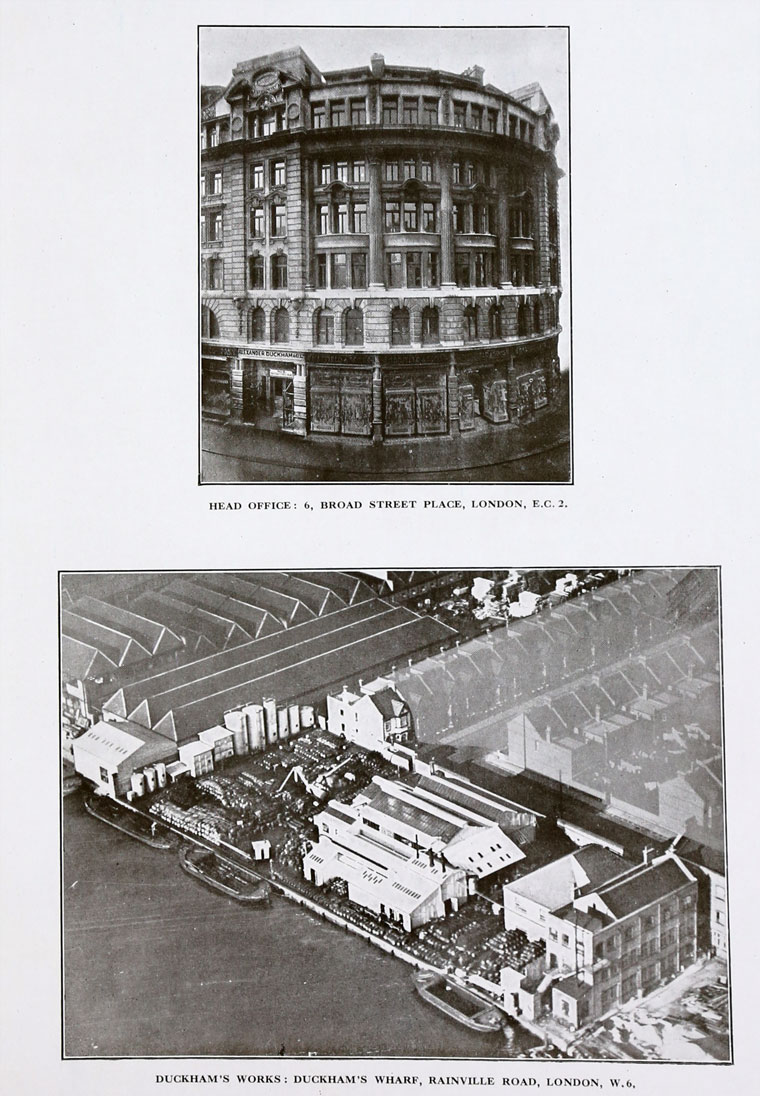 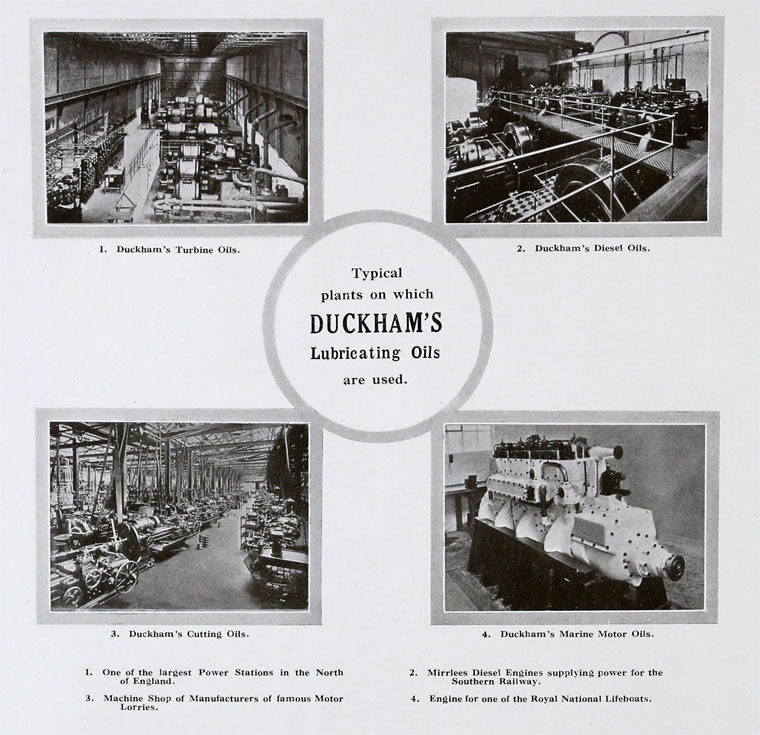 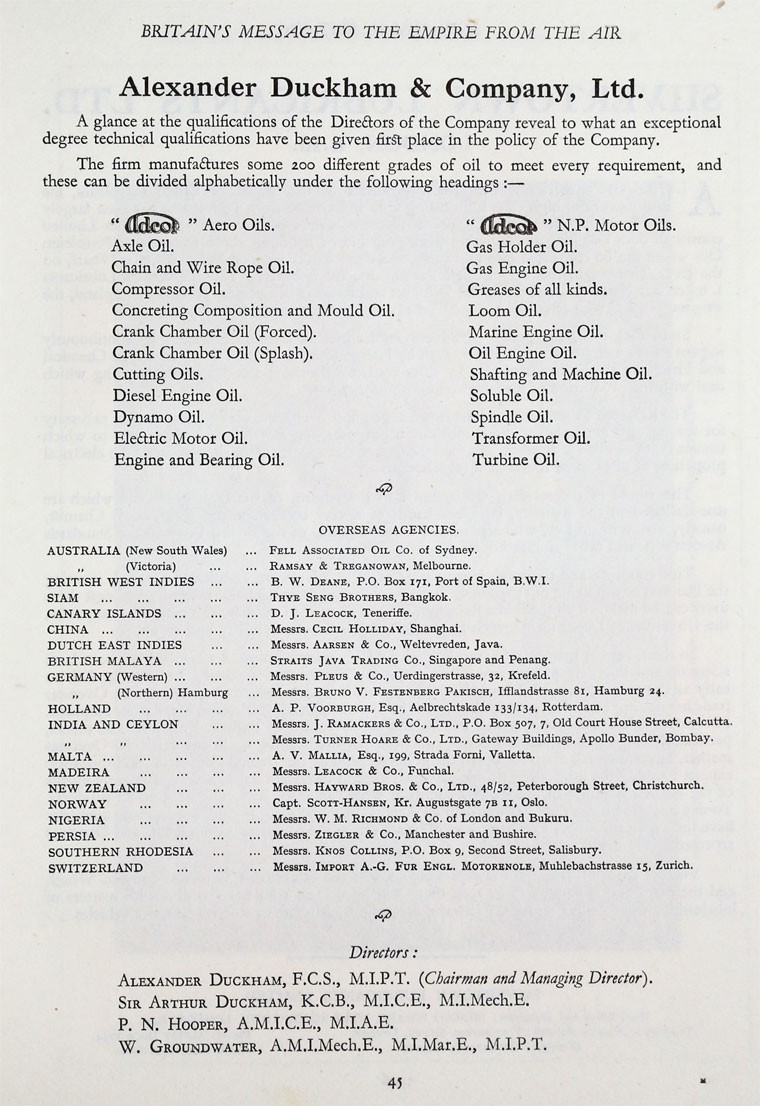 .......Even 30 years ago, when the firm of Alexander Duckham and Co. was founded, there was almost complete absence of scientific method in the practice of lubrication; indeed, it was the recognition of this fact by that famous engineer, Sir Alfred Yarrow, which led him to advise Mr. Alexander Duckham, then finishing his University career, to make the Study of lubrication his speciality, and he went to far as to assist him by introducing him to numerous engineering firms having problems to solve.

Such questions as the cause and curing of deposits in electrical transformers and in the oil systems of turbines, the application of emulsion of oil and water to machine tools which require the combination of cooling and lubrication, the cure of the epidemic of skin diseases among operatives using petroleum oil, the surmounting of electrolytic corrosion of ball bearings, the preparation of homogeneous non-separating greases, the evolution of oils not subject to emulsification, etc., etc., were in course of time investigated and successfully dealt with. During this period Mr. Duckham gathered round hint a Staff of engineers and chemists, and was soon able to delegate to them consultative work on the problems of the individual consumers, and so was able to give almost undivided attention to the production side of the business.

Again, at the instigation of Sir Alfred Yarrow and of Lord Fisher, he devoted himself to discovering petroleum within British territory, and in 1905 was a pioneer in the development of the Trinidad oil fields, which now produce approximately a half of the oil within the Empire, and here, incidentally, was discovered a deposit of high-class crude without parallel as a base for the preparation of lubricants.

It will thus be seen that Mr. Duckham's entry into petroleum technology coincided at a period when the evolution of internal combustion engines and other improved forms of power plant began to reveal the shortcomings of the lubricants which were essential to the success of such prime movers; indeed, in those days, taking one instance alone, carbon deposit in cylinders and its incidental troubles, these were simply regarded as necessary evils which one must patiently suffer.

At the opening of the Great War, the firm had gradually reached such position that it was recognised as being, probably the highest authority on technological problems in matters of lubrication. The period of the War naturally meant a pause in the pursuit of its research work as chemists and managerial Staff were mobilised either for active service or to assist in the munitions effort; indeed, only one Director was left to carry on the business, the Chairman becoming Deputy Director General of Ordnance Supply and Sir Arthur Duckham, Director-General of Aircraft Production, and he also had under his charge the production of machine tools and tanks.

Immediately after the War, however, the Research Department met with great success in the evolution of the "New Process" oil which has actually revolutionised the refining of lubricants for internal combustion engines. Naturally, as soon as this commodity was put on the market there were many imitators, but fortunately for the firm, they have continued Step by Step to achieve improvements to that they have never lagged behind their competitors, but have, indeed, always kept ahead of them. As everyone knows, with the increasing popularity of the Diesel engine, the internal combustion engine is reaching the premier place as the prime mover, and the ground work which was done in the early days in studying the requirements of the petrol and gas engines, has been of inestimable value in catering for the increasingly crafting requirements of heavy-oil engines.

The possibility of practically every advance in the development of and in the proving of, the efficiency of power units depends on the ability of the petroleum technologists to produce a lubricant which will meet the conditions imposed by such changed circumstances.