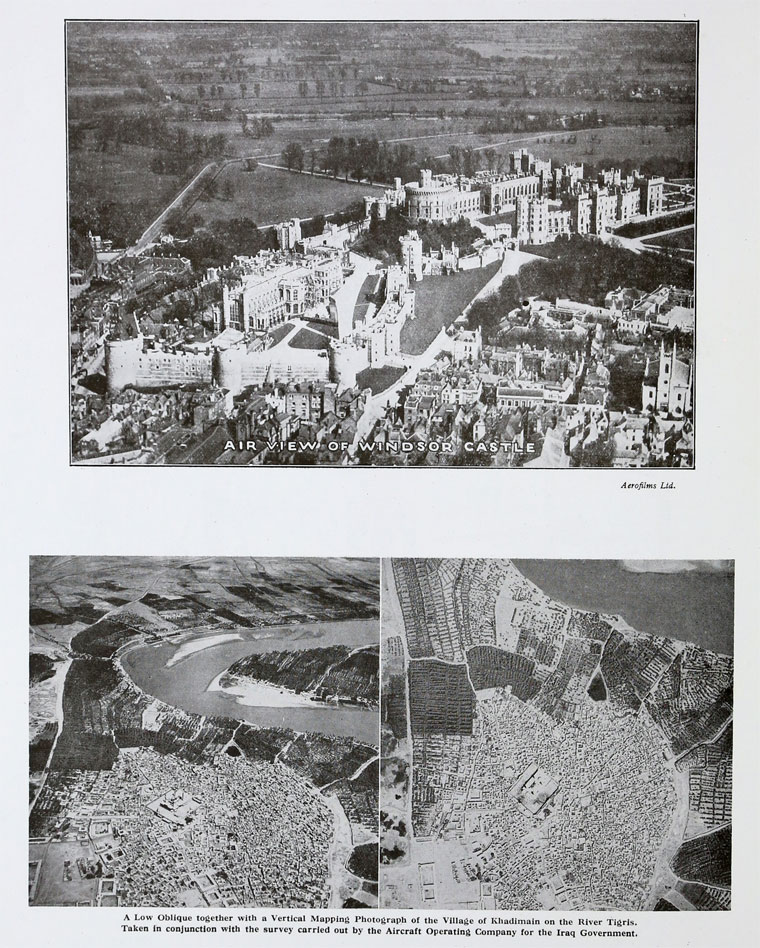 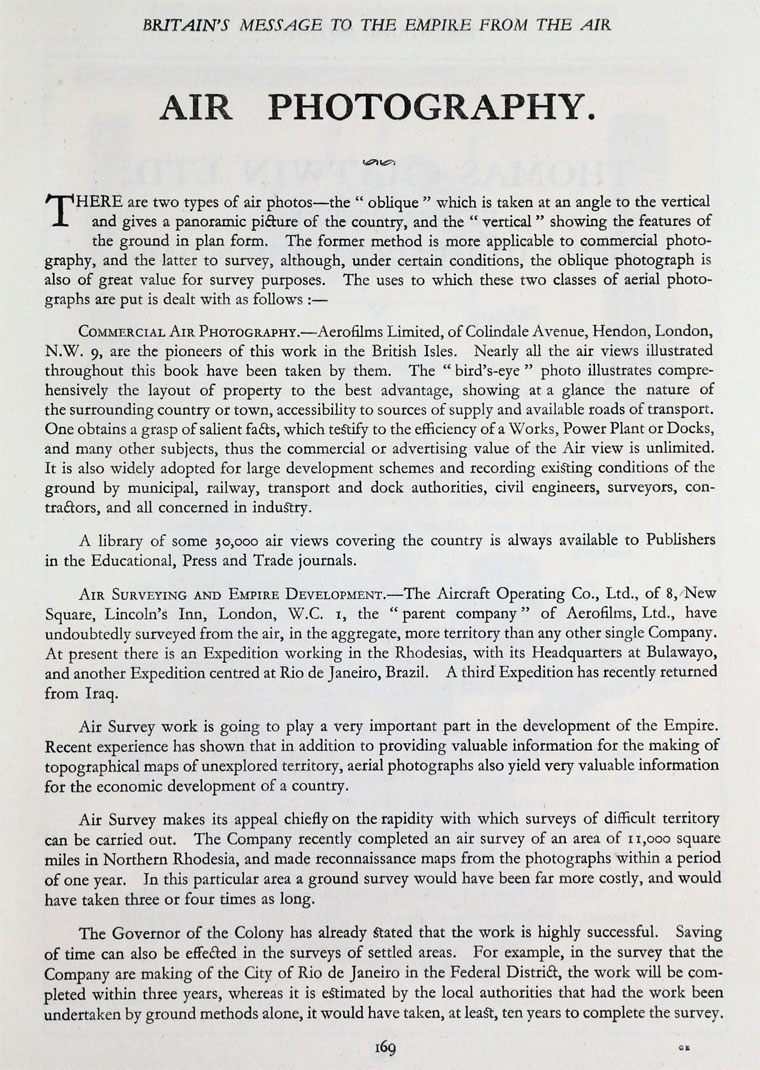 There are two types of air photos - the "oblique" which is taken at an angle to the vertical and gives a panoramic picture of the country, and the "vertical" showing the features of the ground in plan form. The former method is more applicable to commercial photography, and the latter to survey, although, under certain conditions, the oblique photograph is also of great value for survey purposes. The uses to which dose two classes of aerial photographs are put is dealt with as follows -

COMMERCIAL AIR PHOTOGRAPHY.- Aerofilms Limited, of Colindale Avenue, Hendon, London, N.W. 9, are the pioneers of this work in the British Isles. Nearly all the air views illustrated throughout this book have been taken by them. The "bird's-eye" photo illustrates comprehensively the layout of property to the best advantage, showing at a glance the nature of the surrounding country or town, accessibility to sources of supply and available roads of transport. One obtains a grasp of salient facts, which testify to the efficiency of a Works, Power Plant or Docks, and many other subjects, thus the commercial or advertising value of the Air view is unlimited. It is also widely adopted for large development schemes and recording existing conditions of the ground by municipal, railway, transport and dock authorities, civil engineers, surveyors, contractors, and all concerned in industry.

A library of some 30,000 air views covering the country is always available to Publishers in the Educational, Press and Trade journals.

AIR SURVEYING AND EMPIRE DEVELOPMENT.-The Aircraft Operating Co, Ltd., of 8, New Square, Lincoln's Inn, London, W.C.1., the "parent company" of Aerofilms, Ltd., have undoubtedly surveyed from the air, in the aggregate, more territory than any other single Company. At present there is an Expedition working in the Rhodesias, with its Headquarters at Bulawayo, and another Expedition centred at Rio de Janeiro, Brazil. A third Expedition has recently returned from Iraq.

Air Survey makes its appeal chiefly on the rapidity with which surveys of difficult territory can be carried out. The Company recently completed an air survey of an area of 11 ,000 square miles in Northern Rhodesia, and made reconnaissance maps from the photographs within a period of one year. In this particular area a ground survey would love been far more costly, and would have taken three or four times as long.

The Governor of the Colony los already Stated that the work is highly successful. Saving of time can also be effected in the surveys of settled areas. For example, in the survey that the Company are making of the City of Rio de Janeiro in the Federal District, the work will be completed within three years, whereas it is estimated by the local authorities doss load the work been undertaken by ground methods alone, it would have taken, at least, ten years to complete the survey.