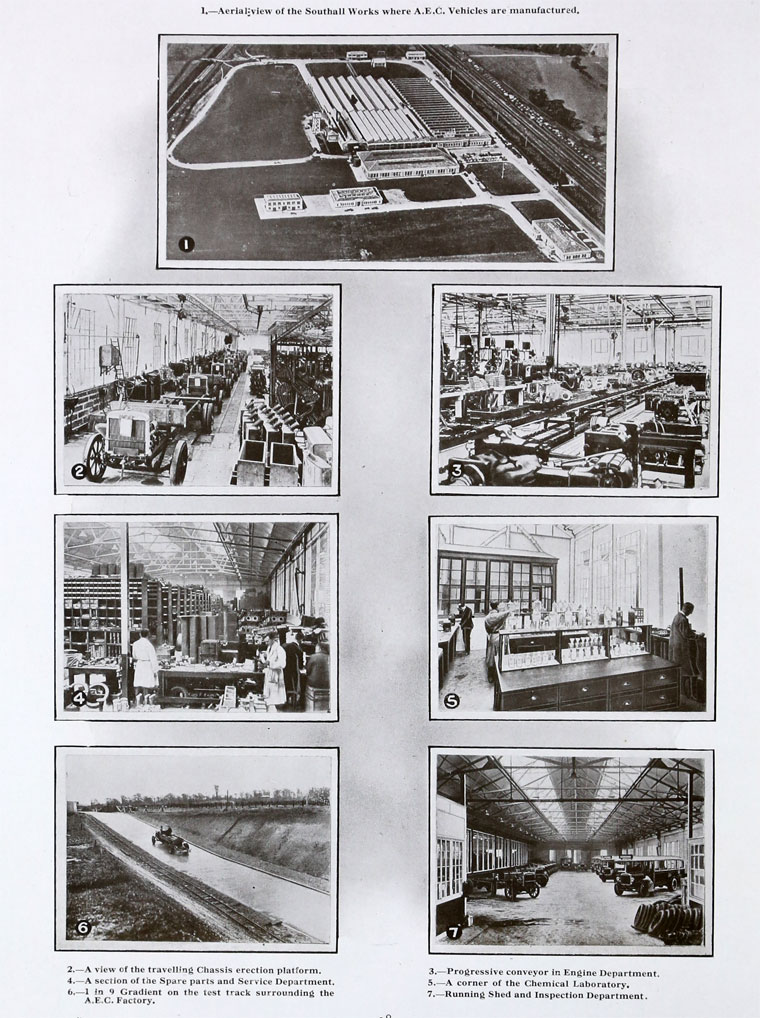 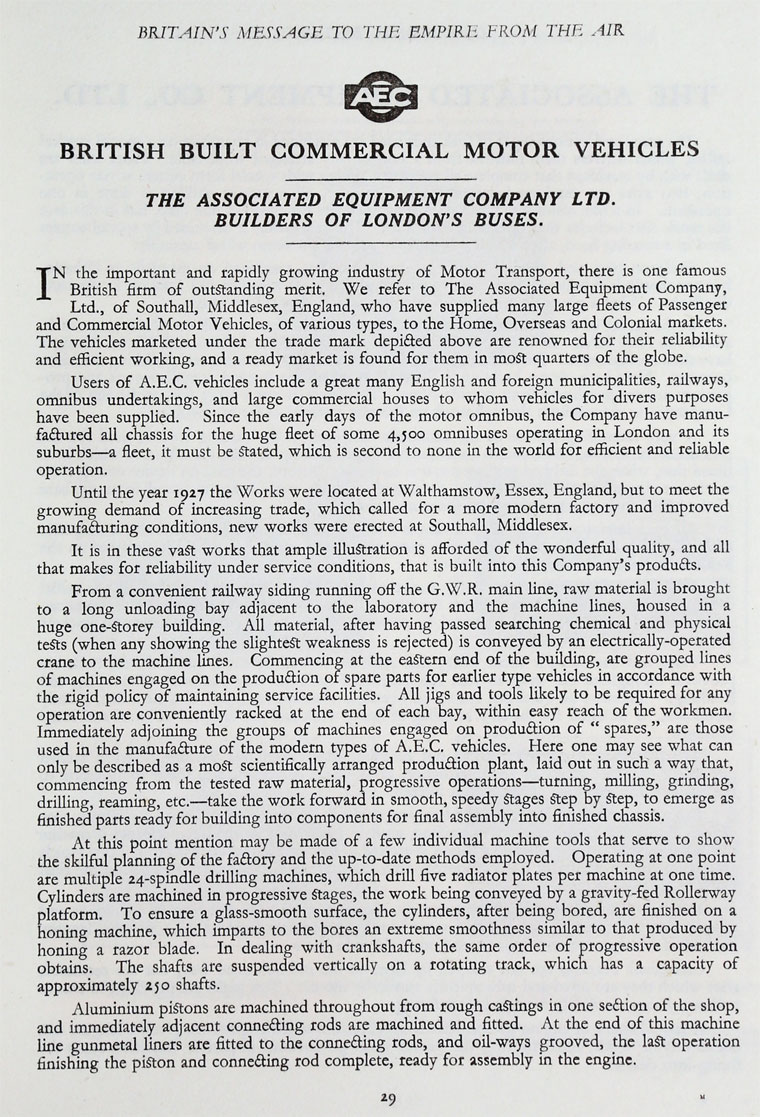 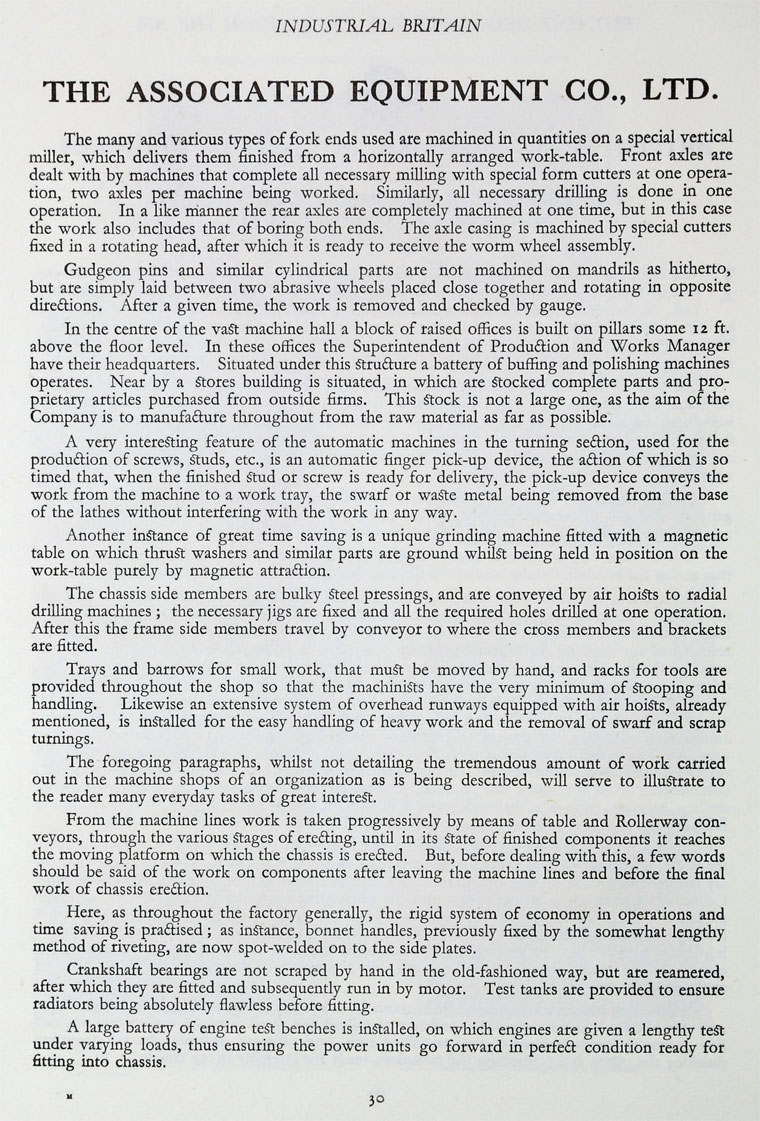 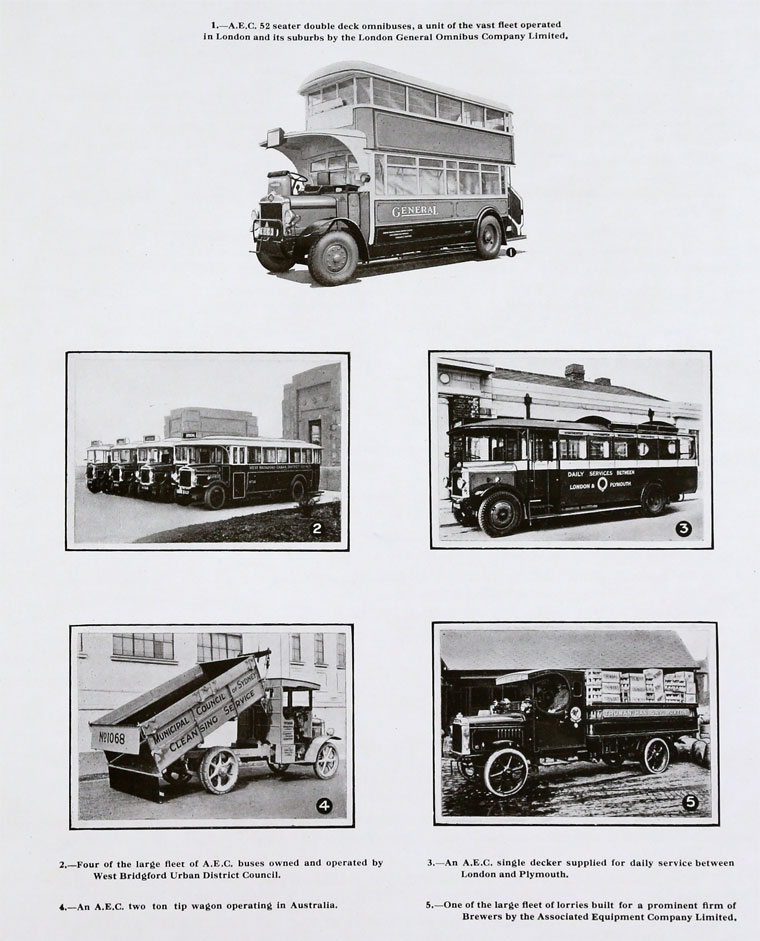 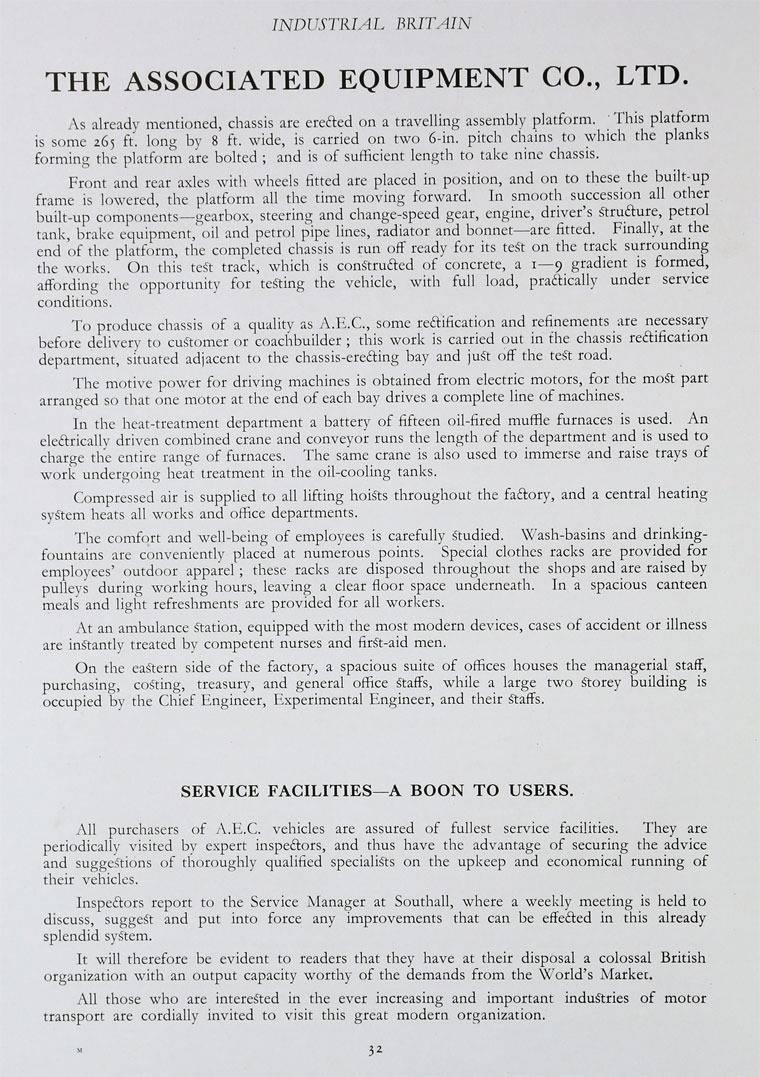 IN the important and rapidly growing industry of Motor Transport, there is one famous British firm of outstanding merit. We refer to The Associated Equipment Company, Ltd., of Southall, Middlesex, England, who have supplied many large fleets of Passenger and Commercial Motor Vehicles, of various types, to the Home, Overseas and Colonial markets. The vehicles marketed under the trade mark depicted above are renowned for their reliability and efficient working, and a ready market is found for them in most quarters of the globe.

Users of A.E.C. vehicles include a great many English and foreign municipalities, railways, omnibus undertakings, and large commercial houses to whom vehicles for divers purposes have been supplied. Since the early days of the motor omnibus, the Company have manufactured all chassis for the huge fleet of some 4,500 omnibuses operating in London and its suburbs - a fleet, it must be stated, which is second to none in the world for efficient and reliable operation.

Until the year 1927 the Works were located at Walthamstow, Essex, England, but to meet the growing demand of increasing trade, which called for a more modern factory and improved manufacturing conditions, new works were erected at Southall, Middlesex.

It is in these vast works that ample illustration is afforded of the wonderful quality, and all that makes for reliability under service conditions, that is built into this Company's products.

From a convenient railway siding running off the G.W.R. main line, raw material is brought to a long unloading bay adjacent to the laboratory and the machine lines, housed in a huge one-Storey building. All material, after having passed searching chemical and physical tests (when any showing the slight. weakness is rejected) is conveyed by an electrically-operated crane to the machine lines. Commencing at the eastern end of the building, are grouped lines of machines engaged on the production of spare parts for earlier type vehicles in accordance with the rigid policy of maintaining service facilities. All jigs and tools likely to be required for any operation are conveniently racked at the end of each bay, within easy reach of the workmen. Immediately adjoining the groups of machines engaged on production of "spares," are those used in the manufacture of the modern types of A.E.C. vehicles. Here one may see what can only be described as a mitt scientifically arranged production plant, laid out in such a way that, commencing from the tested raw material, progressive operations - turning, milling, grinding, drilling, reaming, etc. - take the work forward in smooth, speedy Rages Rep by step, to emerge as finished parts ready for building into components for final assembly into finished chassis.

At this point mention may be made of a few individual machine tools that serve to show the skilful planning of the factory and the up-to-date methods employed. Operating at one point are multiple 24-spindle drilling machines, which drill five radiator plates per machine at one time. Cylinders are machined in progressive stages, the work being conveyed by a gravity-fed Rollerway platform. To ensure a glass-smooth surface, the cylinders, after being bored, are finished on a honing machine, which imparts to the bores an extreme smoothness similar to that produced by honing a razor blade. In dealing with crankshafts, the same order of progressive operation obtains. The shafts are suspended vertically on a rotating track, which has a capacity of approximately 55o shafts.

Aluminium pistons are machined throughout from rough castings in one section of the shop, and immediately adjacent connecting rods are machined and fitted. At the end of this machine line gunmetal liners are fitted to the connecting rods, and oil-ways grooved, the last operation finishing the piston and connecting rod complete, ready for assembly in the engine.

The many and various types of fork ends used are machined in quantities on a special vertical miller, which delivers them finished from a horizontally arranged work-table. Front axles are dealt with by machines that complete all necessary milling with special form cutters at one operation, two axles per machine being worked. Similarly, all necessary drilling is done in one operation. In a like manner it rear axles are completely machined at one time, but in this case the work also includes that of boring both ends. The axle casing is machined by special cutters fixed in a rotating head, after which it is ready to receive the worm wheel assembly.

Gudgeon pins and similar cylindrical parts are not machined on mandrils as hitherto, but are simply laid between two abrasive wheels placed close together and rotating in opposite dire6tions. After a given time, the work is removed and checked by gauge.

In the centre of the vat machine hall a block of raised offices is built on pillars some 12 ft. above the floor level. In these offices the Superintendent of Production and Works Manager have their headquarters. Situated under this Structure a battery of buffing and polishing machines operates. Near by a Stores building is situated, in which are Stocked complete parts and proprietary articles purchased from outside firms. This Stock is not a large one, as the aim of the Company is to manufacture throughout from the raw material as far as possible.

A very interesting feature of the automatic machines in the turning section, used for the production of screws, Studs, etc., is an automatic finger pick-up device, the a6tion of which is so timed that, when the finished Stud or screw is ready for delivery, the pick-up device conveys the work from the machine to a work tray, the swarf or waste metal being removed from the base of the lathes without interfering with the work in any way.

Another instance of great time saving is a unique grinding machine fitted with a magnetic table on which thrust washers and similar parts are ground whilst being held in position on the work-table purely by magnetic attraction.

The chassis side members are bulky Steel pressings, and are conveyed by air hoists to radial drilling machines the necessary jigs are fixed and all the required holes drilled at one operation. After this the frame side members travel by conveyor to where the cross members and brackets are fitted.

Trays and barrows for small work, must be moved by hand, and racks for tools are provided throughout the shop so that the machinists have the very minimum of stooping and handling. Likewise an extensive system of overhead runways equipped with air hoists, already mentioned, is installed for the easy handling of heavy work and the removal of swarf and scrap turnings.

The foregoing paragraphs, whilst not detailing the tremendous amount of work carried out in the machine shops of an organization as is being described, will serve to illustrate to the reader many everyday tasks of great interest.

From the machine lines work is taken progressively by means of table and Rollerway conveyors, through the various stages of erecting, until in its state of finished components it reaches the moving platform on which the chassis is erected. But, before dealing with this, a few words should be said of the work on components after leaving the machine lines and before the final work of chassis erection.

Here, as throughout the factory generally, the rigid system of economy in operations and that saving is practised; as instance, bonnet handles, previously fixed by the somewhat lengthy method of riveting, are now spot-welded on to the side plates.

Crankshaft bearings are not scraped by hand in the old-fashioned way, but are reamered, after which they are fitted and subsequently run in by motor. Test tanks are provided to ensure radiators being absolutely flawless before fitting.

A large battery of engine test benches is installed, on which engines are given a lengthy test under varying loads, thus ensuring the power units go forward in perfect condition ready for fitting into chassis.

As already mentioned, chassis are erected on a travelling assembly platform. This platform is some 265 ft. long by 8 ft. wide, is carried on two 6-in. pitch chains to which the planks forming the platform are bolted; and is of sufficient length to take nine chassis.

Front and rear axles with wheels fitted are placed in position, and on to these the built-up frame is lowered, the platform all the time moving forward. In smooth succession all other built-up components - gearbox, steering and change-speed gear, engine, driver's structure, petrol tank, brake equipment, oil and petrol pipe lines, radiator and bonnet - are fitted. Finally, at the end of the platform, the completed chassis is run off ready for its test on the track surrounding the works. On this test track, which is constructed of concrete, a 1 – 9 gradient is formed, affording the opportunity for testing the vehicle, with full load, practically under service conditions.

To produce chassis of a quality as A.E.C., some ratification and refinements are necessary before delivery to customer or coachbuilder; this work is carried out in the chassis ratification department, situated adjacent to the chassis-erecting bay and just if Is rest road.

The motive power for driving machines is obtained from electric motors, for the most part arranged so that one motor at the end of each bay drives a complete line of machines.

In the heat-treatment department a battery of fifteen oil-fired muffle furnaces is used. An electrically driven combined crane and conveyor runs the length of the department and is used to char, the entire range of furnaces. The same crane is also used to immerse and raise trays of work undergoing heat treatment in the oil-cooling tanks.

Compressed air is supplied to all lifting hoists throughout the factory, and a central heating system heats all works and office departments.

The comfort and well-being of employees is carefully studied. Wash-basins and drinking- fountains are conveniently placed at numerous points. Special clothes racks are provided for employees' outdoor apparel; these racks are disposed throughout the shops and are raised by pulleys during working hours, leaving a clear floor space underneath. In a spacious canteen meals and light refreshments are provided for all workers.

At an ambulance station, equipped with the most modern devices, cases of accident or illness are instantly treated by competent nurses and first-aid men.

On the eastern side of the factory, a spacious suite of offices houses the managerial staff, purchasing, costing, treasury, and general office Staffs, while a large two Storey building is occupied by the Chief Engineer, Experimental Engineer, and their Staffs.

SERVICE FACILITIES - A BOON TO USERS.

All purchasers of A.E.C. vehicles are assured of fullest service facilities. They are periodically visited by expert inspectors, and thus have the advantage of securing the advice and suggestions of thoroughly qualified specialists on the upkeep and economical running of their vehicles....

...It will therefore be evident to readers that they have at their disposal a colossal British organization with an output capacity worthy of the demands from the World's Market.

All those who are interested in the ever increasing and important industries of motor transport are cordially invited to visit this great modern organization.