1930 Industrial Britain: A. Reyrolle and Co 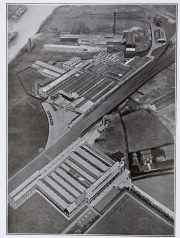 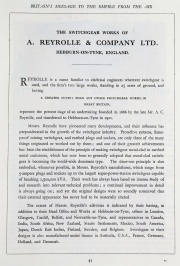 See also A. Reyrolle and Co

REYROLLE is a name familiar to electrical engineers wherever switchgear is used, and the firm's two large works, standing in 25 acres of ground, and having A GREATER OUTPUT THAN ANY OTHER SWITCHGEAR WORKS IN GREAT BRITAIN, represent the present bags of an undertaking founded A 1886 by the late Mr. A. C. Reyrolle, and transferred to Hebburn-on-Tyne in 1955.

Messrs. Reyrolle have pioneered many developments, .d their influence has preponderated A the growth of the switchgear industry. Protective systems, flameproof mining switchgear, and earthed plugs and sockets, are only three of the ma, things originated or worked out by lists; and one of their greatest achievements has been the establishment of the principle of making switchgear metal-clad in earthed metal enclosures, which has now been so generally adopted that metal-dad switch- gear is becoming the world-wide dominant type. The draw-out principle is also embodied, whenever possible, in Messrs. Reyrolle's manufactures, which range from 5-ampere plugs and sockets up to the largest super-power-station switchgear capable of breaking 1,500,000 kVA. Their work has always been based on intense study of and research into relevant technical problems; a continual improvement in detail is always going sit; and yet the original designs were so soundly conceived that their external appearance has never had to be materially altered.

The extent of Messrs. Reyrolle's activities is indicated by this having, in addition to their Head Office and Works at Hebburn-on-Tyne, offices in London, Glasgow, Cardiff, Belfast, and Newcastle-on-Tyne, and representatives in Canada, India, South Africa, New Zealand, Straits Settlements, 'Mexico, South America, Japan, Dutch East Indies, Finland, Sweden, and Belgium. Switchgear to their designs is also manufactured under licence in Australia, U.S.A., France, Germany, Holland, and Denmark.