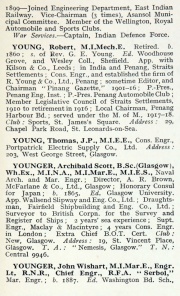 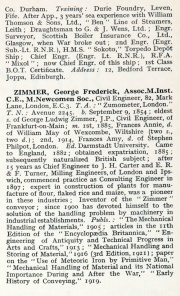 Note: This is a sub-section of 1922 Who's Who in Engineering

YALE, Thomas Parry Osborne, J.P., M.I. E.E., Electrical and Motor Car Engineer, Blaenau-Festiniog, North Wales. T. A.: "Yale, Bettws-y-Coed." b. 1868; third s. of late W. C. Yale-Jones-Parry of Madryn Castle, Carnarvonshire. Ed. Marlborough College, Germany, France, U.S.A., Faraday House. With Ernest Scott & Mountain, Newcastle-on-Tyne. Discovered the " quick-stirring " process in electroplating, by which means the rate at which some metals could be satisfactorily deposited was increased enormously, e.g., zinc by a thousand-fold faster than the generally-accepted rate laid down by Professor Kiliani of Munich. Founded the Yale Electric Power Co., Ltd., at Blaenau-Festiniog, North Wales, which is the first hydro-electric plant for the supply of power to the public in Great Britain, without auxiliary steam or gas. Founded the Bettws-y-Coed Motor Co. Member of the Junior Carlton Club.

YARROW, Sir Alfred, Bart., Marine Engineer, Homestead, Hindhead, Surrey. T. A.: " Yarrow, Hindhead." T. N.: 43 Hindhead. b. 1842; s. of Edgar Williams and Esther Yarrow; m. 1875. Ed. University College School. Commenced business as a shipbuilder and engineer at Poplar, London, in 1866; removed to the Clyde in.1906-8; specialized in the construction of high-speed vessels such as torpedo boats and destroyers, vessels of exceptionally shallow draft, and the Yarrow water-tube boiler. Works at Scotstoun, Glasgow. Member of the Automobile Club. War Services.—The Scotstoun works were practically entirely devoted to the construction of destroyers, the Tigris gunboat flotilla and hospital steamers for the Tigris.

YARWOOD, Henry, M.Inst.M. & Cy.E., A.M.T.P.I., Municipal Engr.; Borough Surveyor, Rochdale; b. 1857. Ed. Manchester Grammar Sch., and Victoria University. Training: Rochdale Land & Mine Surveying. Career: Forty years with the Rochdale Corpn. in the Borough Surveyor's Dept., as Draughtsman, Asst. and Borough Surveyor; now on the point of reverting to the Deputy Surveyor's position so as to be relieved of the more active work and act as Advisor to the Corpn. Address: Town Hall, Rochdale.