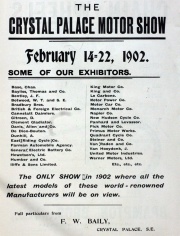 Although the names of many prominent motor car manufacturers are missing from the catalogue of the Crystal Palace and Motor Traders' Co-operative Show which is being held at Sydenham, and closes tomorrow — Saturday — visitors will nevertheless find it extremely interesting and thoroughly representative of the development which has been effected in the automobile. This remark applies particularly to pleasure cars. The heavier vehicles of commerce, such as have been illustrated in these pages from time to time are remarkable chiefly by their absence. This is probably due to two reasons, viz., the remarkable pressure under which the various heavy vehicle builders are working to keep pace with the demand; and, secondly, to the fact that exhibitions of this nature do not attract likely purchasers. No better building near the metropolis could be chosen for an exhibition of motor cars than the Crystal Palace. Standing in its own extensive grounds, with excellent roads and various gradients, the intending purchaser has good opportunities of testing the practical qualities of the vehicles, many of which are running each day.

Although the present exhibition has been the means of introducing several new makers to the public, generally speaking there is a remarkable similarity in design of tho carriages on view. One cannot help noticing the great stride which has been made in the more perfect application of sound mechanical principles. The Internal combustion engine, its accompanying defects notwithstanding, is still without a serious rival, Its adapters have learnt a good deal in the short period with which they have been endeavouring to overcome the inherent difficulties of its adoption for self-propelled carriages, but it is a matter for regret that, judging from the present show, they have still not been able to utilise the cheaper and safer lamp oils of commerce which can be acquired in any village. This is, however, probably only a matter of a very short time. It is obvious that motor car builders have at last become alive to the necessity of providing much more powerful motors than formerly to overcome the loss due to friction in the necessary transmission gear.

Of steam carriages there are singularly few, nor does the electric motor appear to meet with much favour. The prices demanded for carriages remain such as to render automobilism a pastime purely for the wealthy. Any price from £250 to £1,200 is asked for vehicles of from 6 to 16 horse-power. In this respect there is one marked exception.

The Pick Motor Company, Limited, of Stamford, is exhibiting several cars in which the makers have endeavoured to combine reliability and comparative cheapness with neatness of design. These cars are made in sizes varying between 4 and 10 horse-power, and have one or two features in connection with the motor mechanism worthy of notice, as will be seen from the accompanying illustrations. The smallest size of car is driven by a vertical single-cylinder petrol motor, but the larger sizes have a horizontal two-cylinder tandem motor, the working parts of which are easy of access and simple of construction. The timing gear is operated from the crank shaft by means of spur wheels. A single cam on the countershaft opens alternately the exhaust valves of the cylinders. Electric ignition is used, the contact breaker being also provided on the countershaft. Owing to the cylinders being arranged tandem fashion only one coil is necessary, thus obviating multiplicity of wires. Power is transmitted from the motor in front of the car to a countershaft situated behind the rear axle, giving the desired long belt drive, in this case from 5ft. 6in. to 6ft. The belts can be tightened when necessary by stretching gear attached to the frame of the car. On the countershaft is a loose pinion gearing with a large toothed wheel on the differential box. On the same shaft is another loose pinion engaging by means of a chain-wheel on the differential box. A clutch working on a feather key on the countershaft, and situated midway between the two pinions, gives two speeds forward and two speeds reverse, according as the clutch is engaged by a lever with the toothed pillion or with the chain pinion. This is a simple and effective arrangement. To the drum of the differential box is attached a powerful brake operated by the foot of the driver, and there are also two brakes on the driving wheels.

Among several other noteworthy exhibits the stands of the Motor Power Company, Limited, Regent-street, London, and De Dion-Bouton, Limited, are worthy of special notice. The former firm shows, besides other cars, several of the well-known Napier machines, which compare favourably in all respects with their foreign prototypes. They are all high- powered machines, the water-cooled petrol motors capable of developing variously from 10.5 to 24 horsepower on the brake. The smaller ears have only two vertical cylinders, but for the higher powers four cylinders are provided. The main driving shaft has four cranks, and runs longitudinally of the car. Between the engine shaft and the change-speed gears is a powerful clutch, which can be easily thrown in and out of gear by means of a foot lever. Four forward speeds are provided. The change-speed gearing is of ample strength, the steel spur wheels being accurately machined, and the top main shaft is carried on roller bearings. It is all enclosed in an aluminium case and runs in oil, and ball bearings are provided for the thrust blocks. The main frame of the car is of steel, and the wheels of the gun-carriage pattern. The motors, with their valves, are arranged under a bonnet in front of the car, and are easy of access. Most of the working parts of these cars are laid open for inspection. Ample brake power is provided, the hand brakes on the countershaft being water-cooled.

The Panhard and Levassor carriages have many features in common with the Napier, the latter being originally modelled on the lines of the former. They are made of various powers, from 7 horse-power to 16 horse-power, and the arrangement of motors and change-speed gearing is designed much on the same lines. The 16 horse-power "chassis" — a French term now generally adopted in this country, and signifying the whole of the car with the exception of the body — shows at very high degree of finish. This machine has a four-cylinder vertical motor, 130 mm. diameter by 110 mm. stroke, in which the valves are admirably arranged for accessibility. Unlike some of the earlier motors made by this eminent French firm, the motors are now governed on the throttle valve, by a pretty piece of mechanism. Lubrication is well provided for throughout. Some idea of the workmanship involved in the construction of a car of this size can be gathered from the price, viz., about £1,200.

The only heavy motor wagon in the show is that made by Jesse Ellis and Co., Limited, Maidstone, and although not of quite the latest pattern produced by this firm, is interesting on account of the fact that it has been at work for some considerable period, and interested visitors are enabled to form a good idea of the probable life of a well constructed heavy vehicle. The boiler is of the vertical water-tube type, and constructed to burn coal or coke. It has about 75 square feet of heating surface, and works at a pressure of 200 lb. The engine is of the horizontal compound pattern, easy of access and capable of developing about 25 horse-power. A bypass valve is provided for admitting high-pressure steam to the low-pressure cylinder to facilitate starting under adverse circumstances. By means of a special feed-pump, worked off the second motion shaft by an excentric, any excess of water above the quantity needed for feeding the boiler can be pumped back to the tank by opening a valve; the boiler is also fitted with a reliable injector. The gear wheels are of steel, speeded for three and five miles per hour, and the engine, boiler, and gear are mounted on a spring frame connected to the front and hind axles. Power is transmitted to the driving wheels by means of an intermediate shaft and two-speed gear, the usual differential gear being provided on the driving-wheel shaft, which is fitted with roller bearings. In length this vehicle is 16ft. and its extreme width 6ft. 6in., 60 square feet being the platform area, The leading wheels are of wood with iron tires, and are 3ft. diameter and 4in. tread; and the driving wheels are 6in. larger in diameter and 1/2in, wider on the face. The steerage is of the ordinary dividing axle class. Two brakes are fitted - one a band brake acting upon the fly-wheel and worked by the foot; and one upon the rim of the rear wheels of the wagon, worked by a screw.

In the motor cycle section all other machines sink into insignificance, in point of originality compared with Colonel Holden's bicycle, exhibited by the Motor Traction Company, Limited, Walnut Tree-walk, Kennington, S.F. As we hope to give an illustrated description of this machine in a future issue, we shall only briefly enumerate its special features here. A four-cylinder water-cooled horizontal petrol motor forms the bottom member of the frame of the bicycle, and drives direct by means of cranks and connecting-rods the rear wheel of the machine. The action of the motor is thus reciprocal and continuous, giving an impulse every stroke. The cylinders are steel tubes with brass water-jackets brazed on. Electric ignition and automatic lubrication are provided. The machine altogether is a distinct advance on the modern motor bicycle, its chief demerits being the small size of the rear driving wheel and the somewhat complicated valve system rendered necessary by the introduction of four cylinders. The motor is of 3 horse-power. Probably in future designs the inventor will be able to introduce gearing on the hub of the driving wheel, so that a larger wheel may be employed. On the machine shown at the Crystal Palace no pedals are provided.