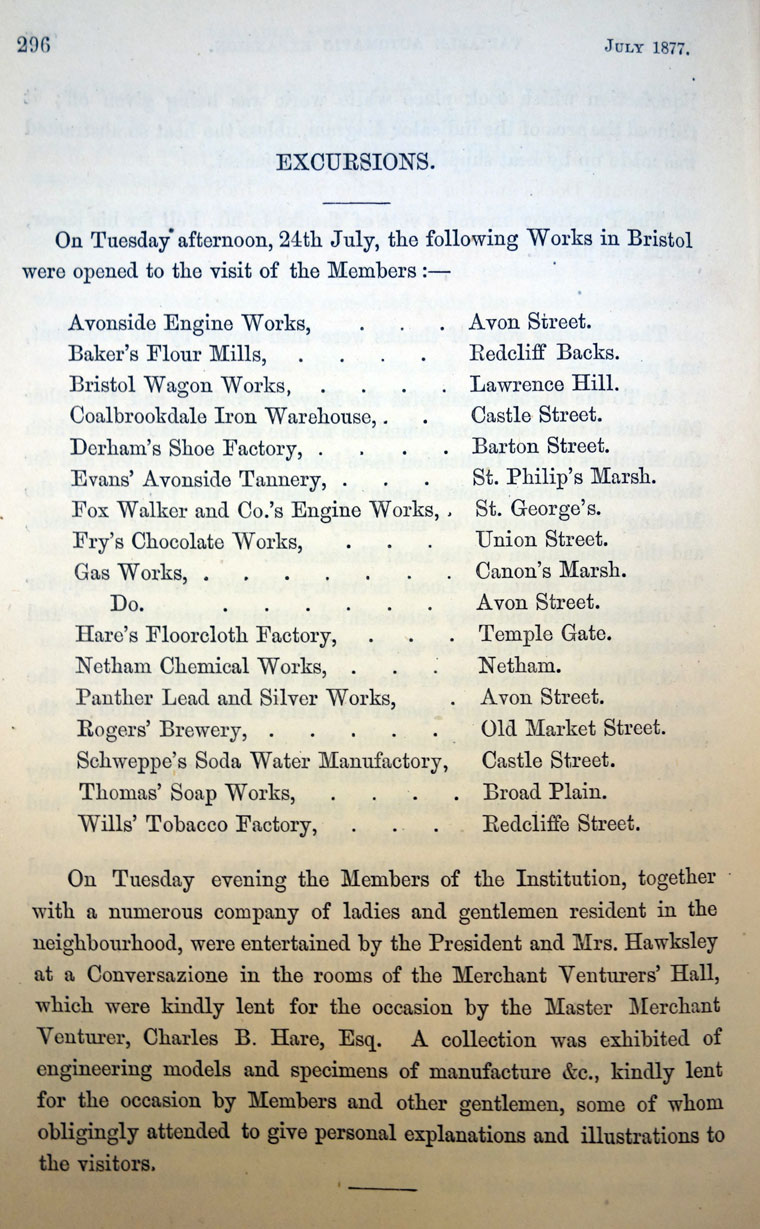 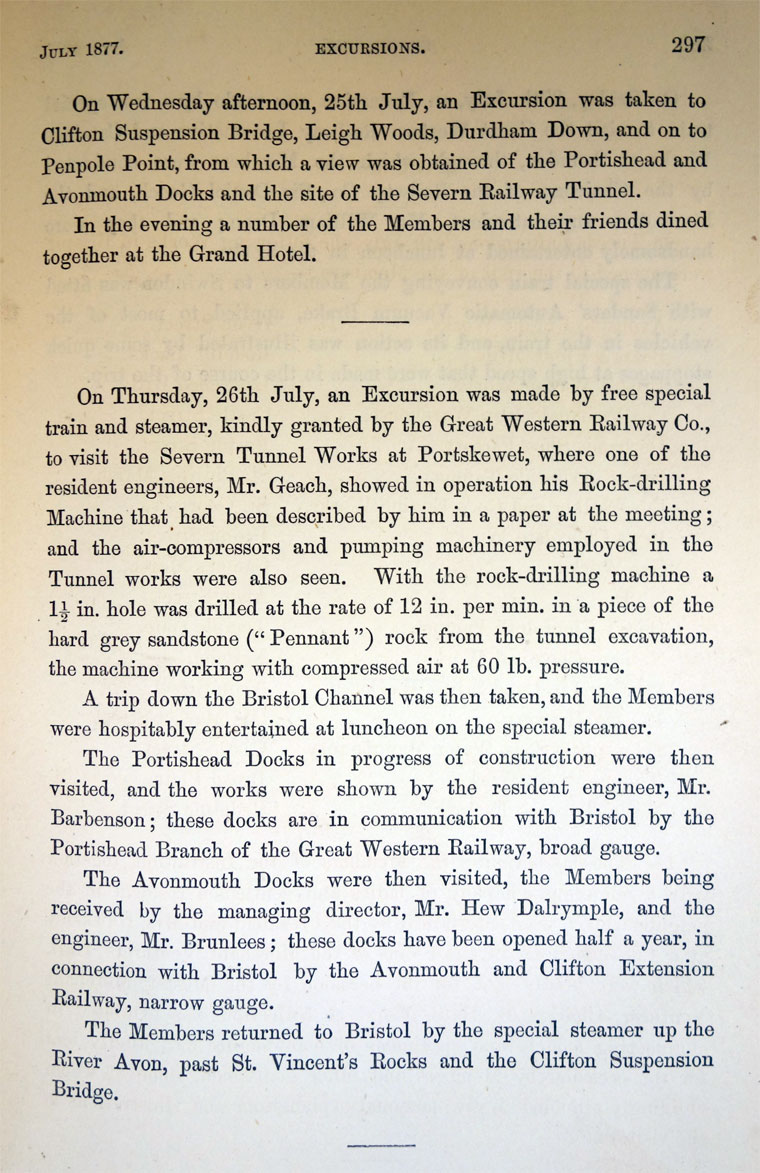 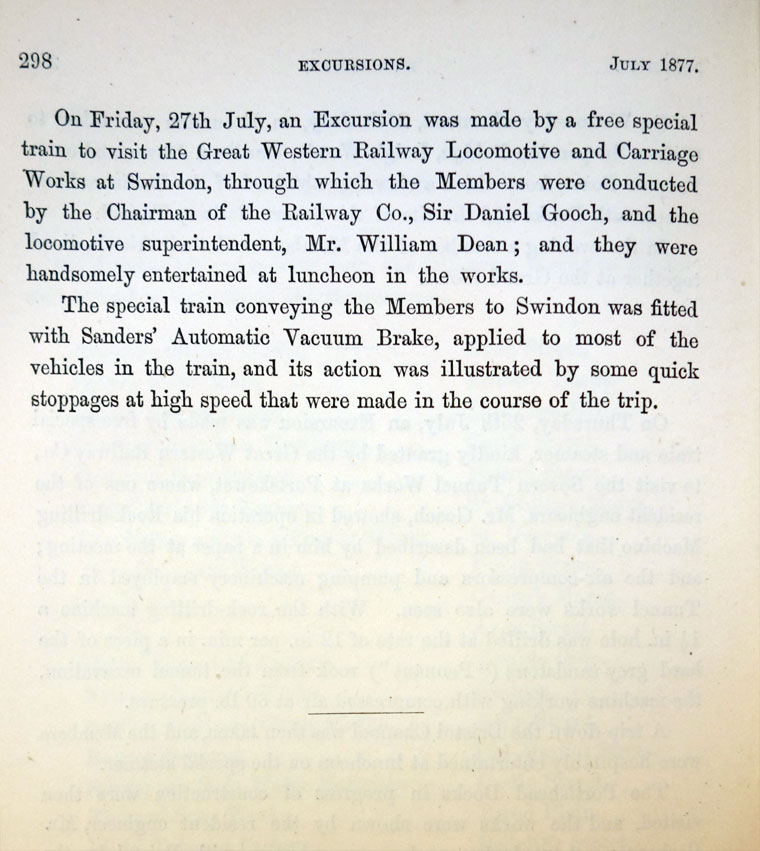 Note: This is a sub-section of 1877 Institution of Mechanical Engineers

Visits to Works (Excursions) in the Bristol area

Places opened to the members

On Tuesday' afternoon, 24th July, the following Works in Bristol were opened to the visit of the Members:—

On Tuesday evening the Members of the Institution, together with a numerous company of ladies and gentlemen resident in the neighbourhood, were entertained by the President and Mrs. Hawksley at a Conversazione in the rooms of the Merchant Venturers' Hall, which were kindly lent for the occasion by the Master Merchant Venturer, Charles B. Hare, Esq. A collection was exhibited of engineering models and specimens of manufacture &c., kindly lent for the occasion by Members and other gentlemen, some of whom obligingly attended to give personal explanations and illustrations to the visitors.

On Wednesday afternoon, 25th July, an Excursion was taken to Clifton Suspension Bridge, Leigh Woods, Durdham Down, and on to Penpole Point, from which a view was obtained of the Portishead and Avonmouth Docks and the site of the Severn Railway Tunnel.

In the evening a number of the Members and their friends dined together at the Grand Hotel.

On Thursday, 26th July, on Excursion was made by free special train and steamer, kindly granted by the Great Western Railway Co., to visit the Severn Tunnel Works at Portskewet, where one of the resident engineers, Mr. Geach, showed in operation his Rock-drilling Machine that had been described by him in a paper at the meeting; and the air-compressors and pumping machinery employed in the Tunnel works were also seen. With the rock-chilling machine a in. hole was drilled at the rate of 12 in. per min. in a piece of the hard grey sandstone (" Pennant ") rock from the tunnel excavation, the machine working with compressed air at 50 lb. pressure.

A trip down the Bristol Channel was then taken, and the Members were hospitably entertained at luncheon on the special steamer.

The Portishead Docks in progress of construction were then visited, and the works were shown by the resident engineer, Mr. Barbenson; these docks are in communication with Bristol by the Portishead Branch of the Great Western Railway, broad gauge.

The Avonmouth Docks were then visited, the Members being received by the managing director, Mr. Hew Dalrymple, and the engineer, Mr. Brunlees; these docks have been opened half a year, in connection with Bristol by the Avonmouth and Clifton Extension Railway, narrow gauge.

The Members returned to Bristol by the special steamer up the River Avon, past St. Vincent's Rocks and the Clifton Suspension Bridge.

On Friday, 27th July, an Excursion was made by a free special train to visit the Great Western Railway Locomotive and Carriage Works at Swindon, through which the Members were conducted by the Chairman of the Railway Co., Sir Daniel Gooch, and the locomotive superintendent, Mr. William Dean; and they were handsomely entertained at luncheon in the works.

The special train conveying the Members to Swindon was fitted with Sanders' Automatic Vacuum Brake, applied to most of the vehicles in the train, and its action was illustrated by some quick stoppages at high speed that were made in the course of the trip.