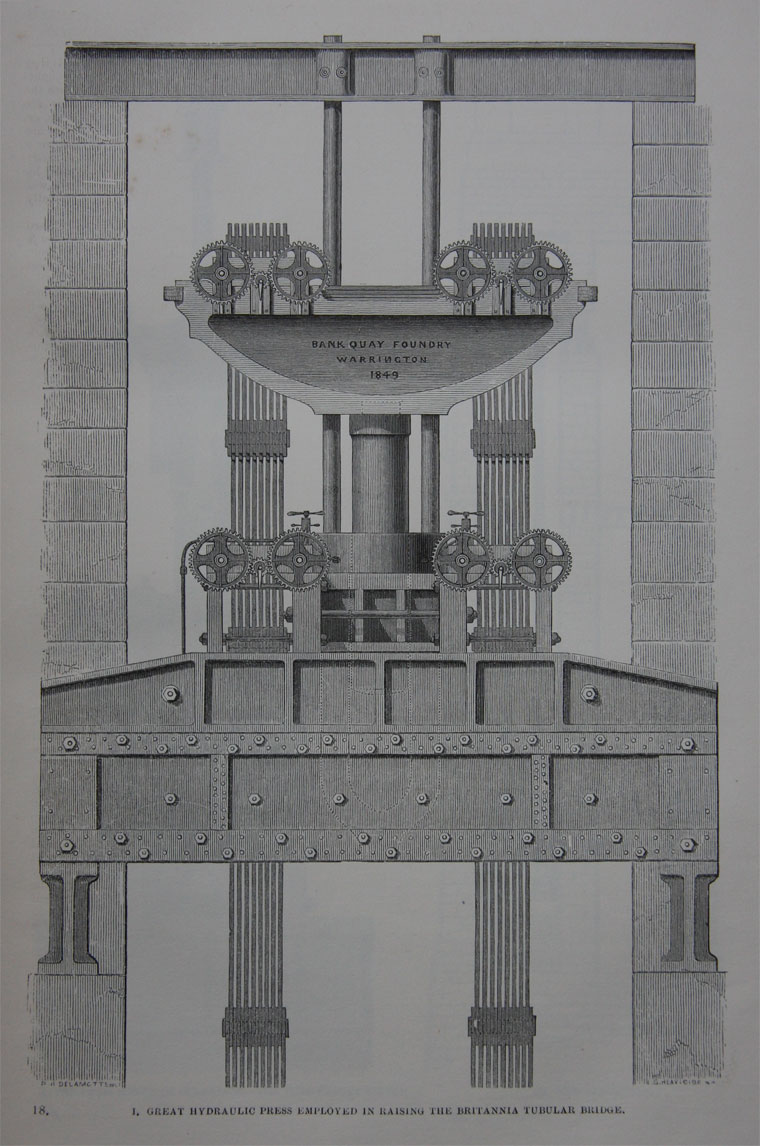 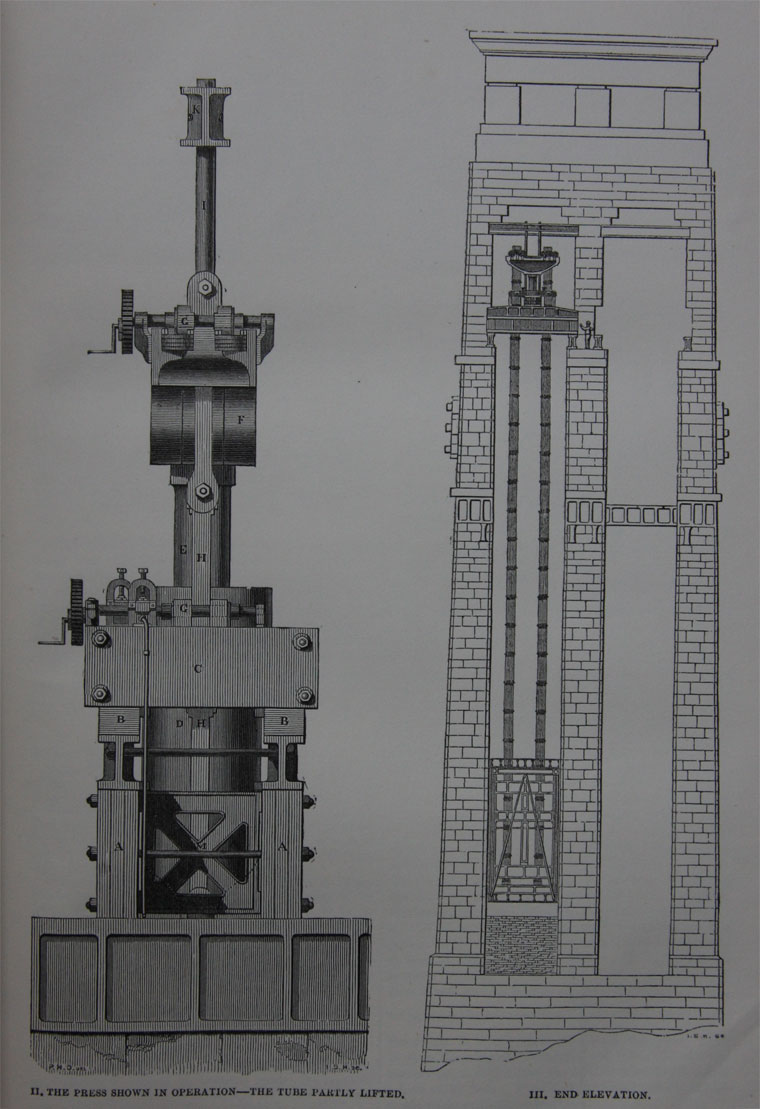 Explanation of the engravings (Plates 18, 19, 20) of the hydraulic press used for raising the tubes of the Britannia Bridge; executed by the Bank Quay Foundry Company, Warrington.

Plate 18 represents a front elevation of the press; Plate 19 an end elevation; and Plate 20 shows its application in raising the Britannia tube, with the latter partly lifted.

The internal diameter of the cylinder is 22 inches, the diameter of the ram is 20 inches, the external diameter of the cylinder is 42 inches, external length 9 feet 1.5 inch; thickness of metal 10 inches; the water is forced into the cylinder through a pipe and valve L, the press is placed in the jacket C, and rests upon the cast-iron beams B B, which again are supported by the wrought-iron beams A A; the cast-iron crosshead F has wrought-iron links let in at the top, for the purpose of strengthening the part subject to tensile strain; the sides of the jacket also are strengthened with wrought-iron slabs, weighing 30 cwt. each, expanded first by heat and then fitted-on hot, and allowed to contract. To cast the cylinder, it required 22 tons of fluid metal, the additional quantity beyond its finished weight being required for the head, or git, which weighed 2.5 tons. This head, or git, was kept in a fluid state for six hours after the run, by replacing the material after it became stiff, with metal fresh from the furnace, and of the highest attainable temperature, for the purpose of supplying the space in this immense body of metal below, consequent upon the contraction. In three days afterwards the cylinder was partly denuded of its outer coat of sand, when it was found red hot: in seven days it was lifted from the pit in which it was cast, and in ten days, or 240 hours, it was sufficiently cool to be approached by men well inured to heat, for the purpose of dressing the remaining sand off it.

The A A beams, for supporting the press, consisted of six vertical ribs of boiler plates, 5/16ths thick, united by vertical strips, to preserve them in form; the 24 inch spaces between ribs were filled with American elm, so that the vertical rib was a sandwich of elm and iron. The top and bottom flanges were each formed by twelve wrought-iron bars, extending the whole length of beam. The top bars 7 inches wide, and the bottom bars 9 inches by 1.125 inch; the whole riveted together. The weight of each girder was 12 tons. In order to prevent the crushing at the ends, cast-iron plates wore inserted instead of the wood.

The weight actually supported by one pair of beams was 1,177 tons, but they were capable of sustaining 2,000 tons. The length between the bearing was 17 feet 4 inches. The ram was cast hollow and turned to bed truly, beneath the crosshead, which was bored to receive it. The crosshead was guided by two wrought-iron rods, 6 inches diameter, fitted in sockets on the top of the press, and keyed above into a cast-iron girder, K, built in the masonry.

There were two sets of clamps: the one placed on the crosshead and rising with it, was immediately used for lifting the chain and tube, the under set was fixed on the cast-iron girders which support the press, and was used for securing the chain at the end of each lift, while the press was lowered, and the upper set of links removed; they are in all respects similar to each other. The wrought- iron clamping cheeks are slotted to fit closely beneath the slotted shoulder in the head of the links; they are withdrawn or closed by right and left handed screws, on turning which the cheeks recede from each other, or are drawn into close contact with the chain. To insure a parallel action, the screws are moved simultaneously by a winch and gearing; they are thus easily worked by one man. Thus at each stroke of the press the tube was raised 6 feet, the time occupied in one lift being usually from 30 to 45 minutes.

The lifting chains were manufactured by Messrs. Howard and Ravenhill; the clamps and valves by Messrs. Easton and Amos. The superintendence of the designs and construction of this machinery were entrusted by Mr. Robert Stephenson, the engineer, to Mr. Edwin Clark.

The greatest weight lifted by the press at the Britannia bridge was 1,144 tons; the quantity of water used for each 6 feet lift 81.5 gallons. "The pressure at 3 tons per circular inch equals 3.819 tons per square inch, which would raise a column of water 5.41 miles in height; this pressure would, therefore, be sufficient to throw water over the highest mountains on the globe." This extraordinary fact is derived from Mr. Edwin Clark's work on the Britannia and Conway bridges. The following additional extract shows indirectly the vast power of this machine:-

After the first tube was raised, the cylinder met with an accident, described in the following terms by Mr. Clark:—

"In a little more than a fortnight after this operation the presses were removed ready for raising the next tube. They were lowered and raised again by means of capstans, with an 8-inch rope; and in this operation another accident occurred with the unlucky press. The cylinder was lowered from a cat-head at the top of the tower; the rope from the blocks led to a capstan on the beach, on which three turns only were taken; while the cylinder, weighing 15 tons, was suspended at an elevation of 140 feet above the water, the rope unexpectedly surged on the capstan, and was dragged out of the hands of the men who were holding it; the cylinder descended with fearful velocity, dragging the rope through the block tackle and round the capstan, which fortunately became palled by the jerk. As the velocity increased, the cat-head in the tower gave way, and the cylinder fell on the stone shelf below, fracturing the masonry, and gliding off 50 or 60 feet into the Straits. Several men were injured, and a sailor who was serving out the coil of rope was dragged round the capstan and killed. None of the tackle was broken, and the press was easily raised by the ropes attached to it, and was found to be uninjured by the fall"

[The weight raised by this single press at the Britannia bridge was 1,144 tons, and this was effected with ease by the hydraulic press exhibited. A popular error prevails on the subject of gaining power by the application of machinery, and particularly with relation to the hydraulic press, in which it appears that a small applied force produces immense results. In this case, however, as in all others, the power is only transferred and distributed. Water, and indeed all fluids, possess the property of pressing equally in all directions. If water is enclosed in an iron box, and the force of one pound is applied to but one square inch of its surface, this pressure is at once communicated to every square inch of the surface of the box. Bramah rendered this force available by applying a packing around the moving pistons, which made them perfectly water-tight under any pressure. By the force pump, pressure is applied to the water in the small cylinder of the pump, and this fluid being connected with that in the large cylinder of the press, whatever force is applied to the water in the first, is increased according to difference of the capacity between it and the last, which was in this case as 1 to 354.3.

Four such cylinders have been cast at Bank Quay Foundry, and they are perhaps the most powerful machines ever constructed.— R. H.]