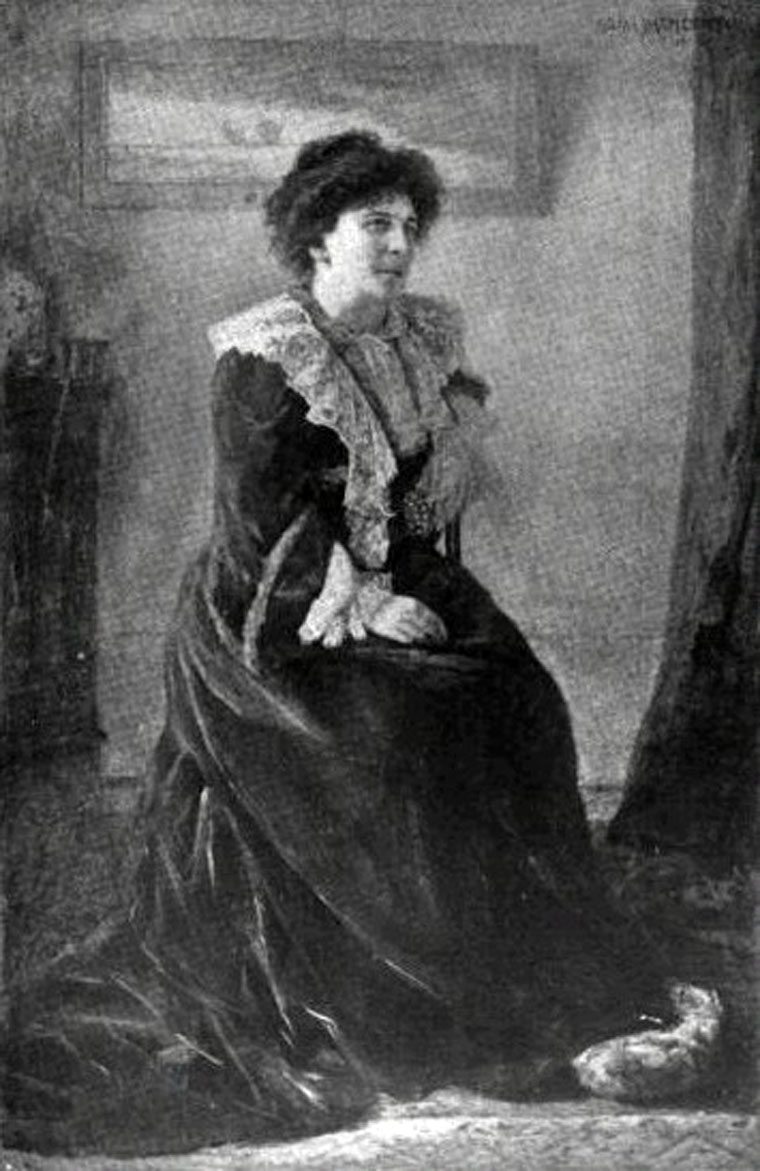 (Phoebe) Sarah Hertha Ayrton (1854-1923), electrical engineer and suffragist. 'It is said that Mrs. Ayrton is indebted to her mother Mrs Alice Marks, who was a woman of quite exceptional ability.'[1]

c.1863 Went to the school run by aunts in north-west London.

c.1870 began teaching in London to support her mother.

1877 to 1881 Hertha read mathematics at Cambridge. While at Girton she constructed a sphygmomanometer, led the choral society, founded the fire brigade, and with Charlotte Scott formed a mathematical club.

1885 Hertha and William were married

Hertha Ayrton lectured to women on electricity and its domestic potentialities.

1893 Took over William's experiments on the electric arc at South Kensington while he was at the Chicago Electrical Congress. Demonstrated a linear relationship between arc length, pressure, and potential difference, which was named the Ayrton equation.

1895-6 Published 12 papers on her work in The Electrician

1899 demonstrated her experiments at the Royal Society's Conversazione, and spoke at the Institution of Electrical Engineers, to which she was elected a member, the only woman to become a member until 1958.

1899 Chaired the physical science section of the International Congress of Women in London, and encouraged women in applied science.

1901 John Perry gave her paper on "The mechanism of the electric arc" at the Royal Society.

Experimented in the attic on formation of waves, eddies and vortices.

1904 Reported her work on standing waves to the Royal Society in person; further presentations in 1908, and 1911, and to the British Association and the Physical Society.

1906 Awarded the Royal Society's Hughes medal for her work on the electric arc and on sand ripples.

1911-3 Hertha marched in all the suffrage processions

WWI Her interest in vortices in water and air inspired the Ayrton fan, or flapper, used in the trenches in the First World War to dispel poison gas. She organized its production, over 100,000 being used on the western front.

1923 Died of blood poisoning (from an insect bite) at North Lancing, Sussex.

"By the death of Mrs. Ayrton, the widow of the late Professor Ayrton, the Institution of Electrical Engineers has lost its only lady member. Mrs. Ayrton was born at Portsea, of Jewish parents. At the age of sixteen she left school and commenced to earn her living by teaching. Subsequently, she entered Girton College, Cambridge, where she took honours in mathematics. Whilst at college she invented and constructed a sphygmograph for recording the beats of the pulse. Upon her return to London, Mrs. Ayrton took out a patent for an instrument for rapidly dividing up a line into a number of equal parts. In 1884 she became interested in electricity, and in the autumn of that year she entered the Finsbury Technical College as a special student, and it was there that she met Professor Ayrton.

In 1893 she assisted in the completion of a series of experiments on the electric arc during Professor Ayrton's absence in America. These and researches on the electric arc were afterwards described in a series of articles appearing in the Electrician during 1895 and 1896. The articles, together with accounts of further researches, were also published in the form of a book, which contain amplified accounts of the papers on the arc read by Mrs. Ayrton at the British Association meetings in 1895, 1897 and 1898; on "The Hissing of the Electric Arc," read by her before the Institution of Electrical Engineers in March, 1899; and other papers read elsewhere.

Mrs. Ayrton was nominated for a Fellowship of the Royal Society in 1902, but as a woman could not be elected, she was awarded the Hughes Medal by the Society in 1906. Her last appearance at the Institution of Electrical Engineers was on December 14th of last year, when she took part in the discussion on Mr. J. Caldwell's paper, "Electric Arc Welding Apparatus and Equipment." During the war she invented a device for dispersing poisonous gas. [2]

HERTHA AYRTON (nee Phoebe Sarah Marks), the first lady member of the Institution, passed away after a short illness on the 26th August, 1923, at the New Cottage, North Lancing.

Born at Portsea of Jewish parents, Miss Marks was educated in London by her aunt, Mrs. Hartog, and at the age of 16 began to earn her own living by teaching. After some years of this work she went to Girton where she made a special study, of mathematics and gained Third Class Honours in the Cambridge Tripos. Whilst at Girton Miss Marks gave early evidence of ingenuity and originality, for during her college course she invented and constructed a sphygmograph for recording pulse-beats, and on her return to London patented a line-divider whereby any line could be divided into any given number of equal parts.

In 1884 Miss Marks entered the Finsbury Technical College as a special student, and in the following year became the wife of the late Prof. W. E. Ayrton, Professor of Applied Physics in the Central Institution of the City and Guilds of London Institute, now the City and Guilds (Engineering) College, South Kensington.

Interest in matters electrical had been aroused during her studentship at Finsbury, and afterwards Mrs. Ayrton was naturally concerned in the many researches being pursued by her energetic and versatile husband. In the early nineties a lengthy and arduous investigation on the electric arc was being carried out by Professor Ayrton and his students, and the intricacy and variability of the results led Mrs. Ayrton to study the phenomena and continue the research during the professor's absence in America. This she did with conspicuous success, and unravelled many of the puzzling peculiarities the arc presented. The results of her work and that of her husband were given in a series of articles in the Electrician during 1895 and 1896 and in papers before the British Association 1895, 1897 and 1898. The Electrician articles contained a summary of previous work on the subject, and, together with her further researches, were amplified and published in book form in 1902. The book still remains a standard work on the arc.

Mrs. Ayrton read a memorable paper on the "Hissing of the Electric Arc" before the Institution in 1899, for which she was awarded a Premium, and in the same year she was elected a Member. A paper on "The Light of the Arc,".before the International Congress of Electricity at Paris in 1900, was made the subject of a special vote of thanks by the section of the Congress in which it was read. Another important paper on " The Mechanism of the Electric Arc " was read before the Royal Society in 1901 and published in the Philosophical Transactions of that Society.

In 1906 the Council of the Royal Society awarded Mrs. Ayrton the Hughes Medal. Her work on the arc naturally directed Mrs. Ayrton's attention to the properties of various kinds of carbons used in arc lamps, particularly those for searchlights and cinema and film studio lamps. For such purposes the candle-power per watt, regularity and steadiness of burning and the effective life of the carbons are matters of great importance, so she began a lengthy research to find the best sizes, materials and proportions for heavy-current work. Scores of carbons of different kinds were designed, made and tested early in the last decade, and six patents for carbons and carbon holders were taken out in 1913 and 1914. Some of the improvements there described are now in common use.

As an artist Mrs. Ayrton possessed no mean powers, and her gifts in this direction enabled her to make excellent large-scale coloured drawings of the arc under various conditions ; it is to be hoped that these drawings may be preserved in the archives of the Institution. Other subjects in which Mrs. Ayrton was interested and which she studied with great success were the " Motion of Oscillating Water " and the " Origin and Growth of Sand Ripples." Papers dealing with these phenomena were read before the Royal Society, and lectures and demonstrations on the phenomena were given at Royal Society soirees and elsewhere.

Shortly after the first gas attack by the Germans in 1915 Mrs. Ayrton brought her knowledge of fluid motion to bear on the problem of protecting our troops from the dangers involved, and as the result of much experimental work devised the " Ayrton flapper fan " for driving off poisonous gases. After much official inertia had been overcome, about 100 000 of these fans were made and supplied to our troops in France and Flanders. The invention, the development of which involved considerable expense, was presented gratis to the nation.

During 1918, motor-driven flapper fans were made and used experimentally for clearing dug-outs, trenches, etc., from poisonous gases. After the armistice Mrs. Ayrton applied her invention to the propulsion of gases and liquids through pipes, the aim being to improve the ventilation «of mines, underground tubes and sewers. She was engaged in this work until a few weeks before her death.

Marked characteristics of Mrs. Ayrton were the skill and patience she displayed in carrying out difficult and tedious experimental work, and the remarkable insight into natural phenomena which she possessed. Socially she was large-minded, generous and kindhearted, and her own description of her benefactress, Madame Bodichon, viz. " Her great intellect and noble presence were an inspiration to all who knew her," is particularly applicable to herself.